RED GILLESPITE: MORE BARIUM SILICATES PLUS AN IDIOM OR TWO

The other day I posted a ms. on some rare barium silicates, sanbornite and macdonaldite, collected from the Big Creek/Rush Creek sites in California (25 June 2020).  With time on my hands I continue examining odds and ends in my collection.  It turns out that I actually had another barium silicate from Big Creek/Rush Creek area in my collection that I missed the first time, a barium iron silicate, gillespite [BaFeSi4O10].

·       With time on my hands [the origin of the idiom 'time on your hands' isn’t known; what scholars do know, though, is that this saying is an old one. The earliest printed example available is from Charles Lamb’s 1833 Last Essay of Elia: “It seemed to me that I had more time on my hands than I could ever manage.” credit to: Gingersoftware.com.
·       odds and ends in my collection [Odds and ends is a plural noun idiom that has existed in English since the mid-1700’s with origins are far back the 14th century. credit to: idioms.online.
·       It turns out [The first use of the phrase can be traced back to the 1500s. Initially, it was used to describe evicting someone for failing to pay rent. Credit to the idioms.com.
·       On the other hand [The first use of the phrase can be traced to 1630. It is a figurative use of the literal action of holding out two hands and offering people two options. If you pick the one option, it will differ from the one on the other hand. Credit to: theidioms.com

Gillespite is much more colorful than many other barium silicates due to the presence of iron; specimens are red.  Crystals are usually “tiny” scattered grains but mostly crystalline masses. The individual grains are usually embedded in the matrix, mostly sanbornite.  It is difficult to distinguish but crystals usually are transparent to translucent, brittle, have a vitreous luster, and a hardness of ~4 (Mohs).  The best way to identify gillespite is to know the collecting locality! 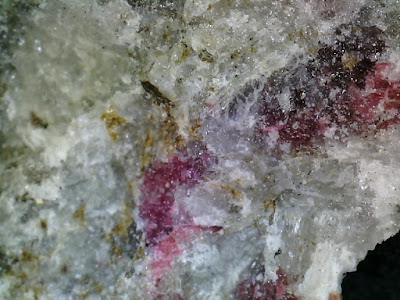 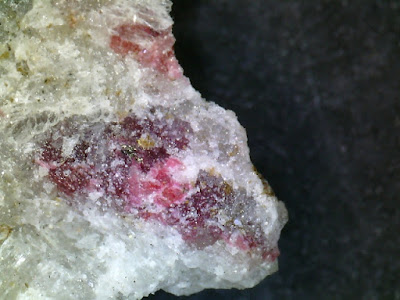 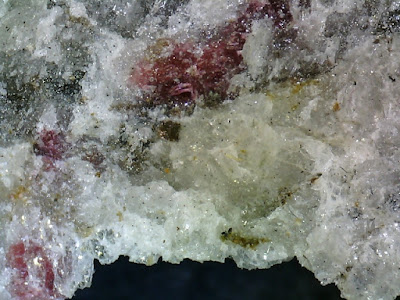 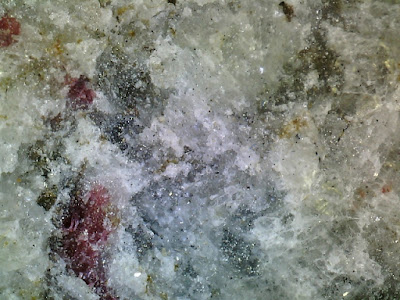 And my mind wanders—from idioms to 50 years ago.  July of 1970 sticks out in my mind, big time.  In early July I was trying to desperately finish up a few blank spots in my field work for the dissertation at the University of Utah.  I was checking last minute locations, mostly in the Evanston, Wyoming, area.  I had finished the screening at my Eocene mammal quarry in summer 1969 and had spent the academic year in four major pursuits: 1) studying for, and passing, my “written exams”  in spring 1970; and 2) using a binocular scope to “pick out” the small fossils in the screened residue; 3) starting to identify the critters; and 4) applying for an academic position (I was successful)—I needed a job as I prepared for fatherhood.   Wow, talk about stress—makes my personal quarantine stress today seem trivial (although not the stress experienced by Covid-19 patients).  On the other hand, it was an exciting time in my life, and we left Salt Lake City on July 24 heading toward Kansas listening to Mungo Jerry (see below) and a new life.  Actually, life was pretty darn good.

This has been one of those weeks where the pandemic almost seems it will never end.  I am right at a hundred days of trying to make the best of a somewhat unpleasant and confining situation.  However, my mind always pops up and notes that I am well and safe and should be thankful for my home as a location to stay well.  So, off I go to read or write or exercise—attitude is everything.  Life is good.

Goudeyite is another one of those colorful hydrated copper arsenates also containing a hydroxyl: AlCu6(AsO4)(OH)6-3H2O [sometimes REEs substitute for some of the aluminum].  It is not overly abundant for collectors and usually is considered as rare.  My specimen came from the Majuba Hill Mine in Nevada [the Type Locality], the home to a variety of arsenate minerals found in the oxidized zone of the sulfide ore body.  All of these secondary copper arsenates seem to have been derived from the primary arsenic-bearing mineral, arsenopyrite (FeAsS).  My question has been, why do all of these different secondary copper arsenates form from the same primary mineral?  Well, I found an interesting article by Magalhães, Pedrosa de Jesus, and Williams (1988) noting that solubility products and formation-free energy seem to control the formation of different minerals.  These authors have produced a number of different stability field diagrams (equilibrium models) “illustrating the chemical conditions under which the various species may crystallize from aqueous solution.”  I had to dig into the deep recesses of my brain to think about some of my chemistry classes and the use of stability diagrams!  They also noted that some of the earliest-formed copper arsenates minerals may be replaced during later chemical changes where new minerals form.  Interesting stuff. 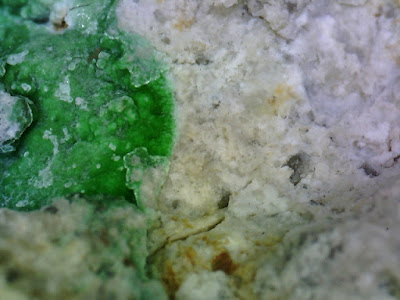 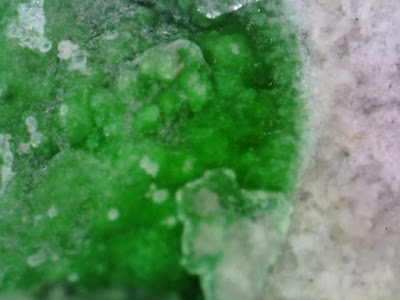 The Majuba Hill Mine is a copper-tin-arsenic deposit that Trites and Thurston (1958) described as a complex plug of rhyolitic rocks intruding Triassic sedimentary rocks.  Copper (27,000 tons of copper ore shipped between 1916 and 1949) and tin (350 tons of shipped ore) were the major commodities with small amounts of gold, lead, arsenic and silver.  Uranium is also known from the mine (area) but has not been mined (I think).  The copper and tin were mined in the supergene area that was enriched by percolating solutions along faults and fractures (maximum depth average ~200 feet).

Goudeyite often forms as acicular crystals that forms tuffs or masses of hair like fibers or spherical masses of radiating hexagonal crystals.  In other instances, the crystals are virtually impossible to observe but form a crust (such as my specimen). Goudeyite is green to yellow-green to blue-green, usually has a vitreous luster and a hardness of ~3.5 (Mohs). As a member of the Mixite Group it is tough to identify and may be confused with other members.

Remember in the mid-1980s when Buckyballs (buckministerfullerenes) came along?  They were one of the first nanoparticles to be discovered and are linked carbon atoms with the finished product resembling are spherical soccer ball.  Science was buzzing with excitement. These molecules were named after R. Buckminster Fuller, a noted architect and inventor who was credited with (at least in the U.S.) designing and popularizing the geodesic dome.  The U.S. military was the first industrial user of the dome but the free spirits (some would call them hippies) jumped on the bandwagon in the 1960s and dome tents and commune building were popular.
In 1933 Fuller designed, with three prototypes built, a dome-type care, the Dymaxion that perhaps in the future could fly, land and drive—WOW.  One might think that all construction in the country would soon feature domes.  But somehow the “idea” slowed and today one might see geodesic domes in the forms of tents, DOT sheds in areas of heavy snow, radar domes, biospheres, and some construction companies/shops.  However, no cars and not many houses.
However, the carbon molecule buckeyballs were far more successful that the geodesic domes and opened up the entire new area of nanotechnology—solar cells, 5G communication, and a whole bunch of things I really don’t fully understand!
As the 21th Century rolled around innovative toy makers discovered that the term Buckyball was not copyright so here came the kiddie toys of round magnets (super-strong, rare earth neodymium magnetic spheres). The youngsters could now build their own models of buckyballs, or a variety of other designs including the ubiquitous refrig magnet to hold up crayon drawings. So, nanotechnologists to kiddies were having fun with buckyballs.
But rockhounds, being a playful bunch, could not let the designers, soccer players, kiddos, architects, chemists, physicists, engineers, etc. have all the fun with rounds balls made of whatever.  We have the geode hunters and sphere makers and even some cab designers having fun playing with minerals.  However, the most fascinating minerals shaped like buckeyballs (spheres of some sort) are usually only seen by rockhounds looking through a loupe or better yet, a scope!  There is a fascinating world that is open to micromounters, a view that is often missed by rockhounds.  Now, I am not really a micromounter (they are really skilled) but do enjoy taking a peek at tiny mineral specimens through my binocular scope and snapping a photomicrograph or two through a not-too-expensive digital camera (wishing I had focus stacking knowledge).

Di I have fun looking at little round balls?  You betcha!  The other day (celebrating firecracker day sequestered in my mineral den) I was looking at a specimen labeled beuranite, an iron phosphate, collected from the Coon Creek Mine in Polk County, Arkansas.  Something seemed wrong for beuranite identification so I looked on MinDat and the mineral was no longer listed—for any locality in Arkansas.  What I did notice was that the mineral in question was cacoxenite, an iron aluminum phosphate [FeAlO6(PO4)17(OH)12-75H2O]. Cacoxenite is often a quite attractive mineral in various shades of yellow to orange to golden to green. And, the tiny acicular crystals (crudely hexagonal, subviterous) are often found in concentric spherical aggregates.  In other words, lots of little cute balls.  Cacoxenite is a secondary mineral (like many other phosphates) in the oxidation zone of ores of iron.  At Coon Creek Mine the mineralization is in fractures of novaculite (fine grained siliceous rock).


Cacoxenite is just one of many phosphate minerals that occur in a variety of spheres, minerals like kidwellite, rockbridgeite and wavealite are common examples.

At the same time I was looking at the Arkansas specimens I picked up a stray on my desk labeled leucophosphite from the Czech Republic.  As a curious sort of person, I stuck the specimen under the scope expecting to see a reddish-orange mineral (I did, the leucophosphite) but also observes a passel of “little balls.” At first glance one might think insect eggs-nope, a bunch of spherical minerals. Somewhere in the back recesses of my mind I recognized the mineral so off I go to MinDat to confirm it was meurigite.  Actually the people in the know have added a k on the end (meurigite-K)  to distinguish the potassium dominant form from the sodium dominant meurigite-Na.   The mineral is another of those potassium iron phosphates [KFe8(PO4)6(OH)7-6.5H2O] that only Tom up at Dakota Matrix can distinguish apart. 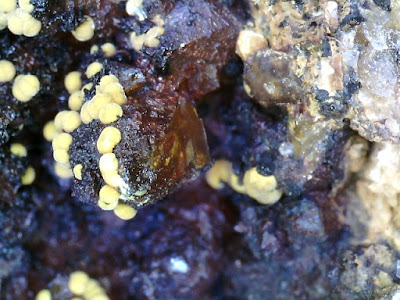 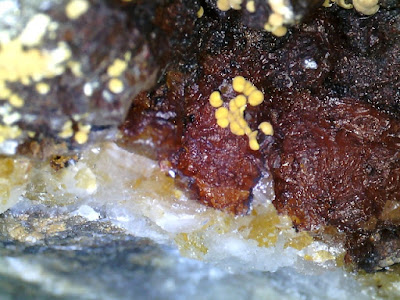 Meurigite-K is yellow to yellow-green to yellow-brown to white in color composed of radial acicular sprays that usually show a concentric pattern on the inside of the spheres. My specimen came from Těškov, Rokycany District, Plzeň Region, Czech Republic.

The fact that you are willing to say, “I do not understand, and it is fine,” is the greatest understanding you could exhibit. Wayne Dyer
Posted by Mike at 7:21 PM No comments: