Visitors travel to Colorado Springs for a number of reason including visits to Pikes Peak, the US Air Force Academy, Garden of the Gods, or perhaps some/many of the Olympic venues.  Most do not arrive in the city thinking about the local geology (they want to pick up that aspect in Rocky Mountain National Park)!  However, I always encourage visitors (many writing to me because of this Blog) to take a road trip from Colorado Springs up U. S. 24 to Woodland Park and continuing to Florissant, summiting Wilkerson Pass, and then on to Hartsel located in the majestic South Park (Bayou Salado) and ending up on Colorado 9 and the small community of Guffy with the nearby 39 Mile Volcanics. Another option is to travel the graveled Old Stagecoach and Gold Camp Roads to Victor and Cripple Creek and then on the Florissant (see Blogs 06/05/2012; 06/07/2012; 0612/2012; 04/24/2013).

The western skyline of Greater Colorado Springs is dominated by rocks of the Pikes Peak Batholith (~1.05 Ga) to the southwest, including Pikes Peak (14,115 feet) and Cheyenne Mountain (9564 feet and home of NORAD).  To the west is the Rampart Range with its granitic core extending north almost to Denver.  The Ute Pass Fault (generally a thrust) fronts Cheyenne Mountain and is responsible for faulting the Precambrian granite to the east, and over Cretaceous rocks.  At Manitou Springs the fault takes a turn to the northwest and heads towards Woodland Park.  U.S. 24, trending northwest and west from Colorado Springs, is built in the fault zone and travelers can easily notice the broken rocks of the Pikes Peak granite (this is actually a generic term since rocks of the Pikes Peak Batholith contain a number of different granites and pegmatites). North of U.S. 24 the Rampart Range Fault fronts the eastern flank of this range.

Manitou Springs is a small city contiguous with, and immediately west of, Colorado Springs.  Many tourists consider the city “as sort of funky” and there are a plethora of “mom and pop” motels, eating places, historic buildings, and small shops selling a wide variety of merchandise from black powder rifles, books, souvenirs, tee shirts, to marijuana.  It is also home to the Cog Railway that slowing putters to the summit of Pikes Peak (for visitors who care not to drive).

Manitou Springs lies right at the base of the Pikes Peak Batholith and its fault junction with the Paleozoic and Mesozoic sedimentary rocks.  The city received its name from the many bubbling springs (from CO2) coming up along broken rocks in the Ute Pass Fault Zone.  Thought at one time to be a health benefit, the springs today are generally capped and diverted into a series of spigots and fountains.  However, one can still fill drinking bottles for later consumption!

Near the west end of Manitou Springs, along Fountain Creek, the visitor can observe a very nice unconformable contact, a great example of a nonconformity.  The Sawatch Sandstone, Cambrian in age (~500 Ma or so), is in contact the Precambrian granite (~1.05 Ga) and therefore  approximately a half billion years of geologic time is missing.  The Sawatch represents the initial excursion, in the Colorado Springs area, of Paleozoic marine waters onto the craton (the old and stable part of the North American continent).  Geologists know that the sedimentary Sawatch (near shore marine/beach) was deposited on top of the Pikes Peak granite, rather than the granite being intruded into the sandstone.  By examining the contact, one can observe: 1) that the unconsolidated sand (at the time of deposition) of the Sawatch flowed over the rough spots of the granite before consolidation; 2) the lack of sandstone alteration that would result from heat generated by an intrusive granite; 3) that the granite below the sandstone is deeply weathered; and 4) that small faults in the granite do not extend into the overlying sandstone.  Therefore, the sandstone is much younger in age than the granite.
As one continues west on U. S. 24 the traveler will notice fantastic road cuts of the Fountain Formation consisting of red to orange to pink, feldspar-rich, sandstones, shales and mudstones.  The formation represents debris shed from the Ancestral Front Range (Frontrangia) about 290-295 Ma in braided streams and alluvial fans.  This ancestral mountain building event is termed the Ancestral Rockies Uplift.  The Fountain Formation is also well-exposed in Garden of the Gods, Red Rocks (Morrison) and the Flatirons (Boulder).
In the Colorado Springs area outcrops of lower and middle Paleozoic rocks above the Sawatch are uncommon and perhaps the best section is located in Williams Canyon, home of Cave of the Winds, a popular tourist attraction near Manitou Springs.  Visitors may read about the cave on their website (www.caveofthewinds.com), but in summary Cambrian, Ordovician, Devonian, Mississippian, and Pennsylvanian rocks are exposed in the canyon, and accessible by trail.  A Disclaimer: the beginning of the trail is on property owned by Cave of the Winds; therefore, check with their ticket booth.  During my last hike I simply signed a waiver.
The Pikes Peak granite has experienced several episodes of erosion totaling tens of millions of years with major events at the end of the Precambrian into the early Paleozoic, during the Ancestral Rockies uplift, at the time of the Laramide Orogeny, throughout the major epeirogenic uplift in the late Tertiary, and continuing into the present.  As a result, outcrops are many times deeply weathered and are covered by“granite gravel” termed grus.  In addition, there are numerous examples of spheroidal weathering, spires, such as the Crags on the west slope of Pikes Peak, and whimsical objects, such as my favorite, “Frog on a Rock.”  Look for it on the north side of U.S. 24 before arriving in Florissant. 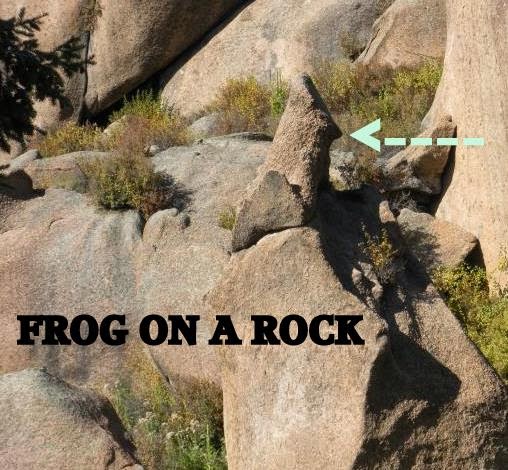 Visitors driving U. S. 24 follow the Ute Pass Fault Zone, and Fountain Creek, to Woodland Park, a small town with a wonderful  museum, the Dinosaur Discovery Center.  At Woodland Park the fault turns north (travel CO 67 towards Deckers) but perhaps the most interesting aspect of the local geology is that Paleozoic rocks are preserved in a faulted syncline north of town, and west of the Rampart Range.  For decades, fossil collectors have pounded on the limestones looking for Ordovician trilobites.
To the west of CO 67, and the north of U. S. 24, the traveler may catch a glimpse of a large, distinct conical peak rising above the general landscape—Signal Butte (see Blog 2/5/2011).  From a geological point of view, Signal Butte is an interesting “oddity” as it exposes middle Tertiary igneous rocks (~1/4 sq. mile) almost in the center of the massive Pikes Peak Batholith (~1300 sq. miles) (Tweto, 1979).  The Batholith, with exposures of pink granites and pegmatites, has been intruded (igneous magma cooling below the surface and within the granite) by gray colored igneous rocks termed a trachydacite with an Eocene age of 42.5 to 45.2 Ma (Tweto, 1979; Wilson and Bryant, 2006).   The hike to the summit is well worth the view, and the rocks are quite interesting.
At the town of Divide, a few miles west of Woodland Park on U. S. 24, CO 67 heads south to the fabled mining towns of Cripple Creek and Victor.  The diggings, “discovered” in 1890-91 by Bob Womack, created the last major “gold rush”, and one of the richest, in Colorado.  The gold, associated with rocks located in a volcanic neck complex about 33.3 Ma, is extremely fine (less than 20 microns in size) and occurs in three principal forms: 1) native gold with pyrite; 2) native gold associated with telluride minerals (calaverite, krennerite, sylvanite); or 3) gold-silver tellurides in quartz-fluorite veins (Vardiman and others, 2005).   Today, and since 1976, the Cripple Creek & Victor Gold Mining Company extracts precious metals and in 2008 produced 250,000 troy ounces of gold!  For a bit of history visitors may tour a historic underground mine, the Mollie Kathleen.  In addition, travelers have an opportunity to “strike it rich” in the current gold rush, for the Cripple Creek casinos offer slot machines, blackjack, roulette, craps, and poker!

Continuing west on U. S. 24 the Pikes Peak granite crops out on both sides of the road and the traveler will get a fantastic view of the Peak to the south.  Near the town of Florissant the rocks change and shales associated with the Florissant Formation (near the Eocene-Oligocene boundary) begin to crop out.  The geology of the area is quite complex but the Formation represents a series of lake beds and volcanics (associated with the Guffy Volcanic Center to the south) that preserved a world-class assemblage of fossil plants, insects and fish (plus a variety of other invertebrates and vertebrates).  Florissant Fossil Beds National Monument was established to protect the assemblage and visitors should plan on a stop and short hike.

The town of Lake George seems at the “center” of the hunt for world- famous crystals of amazonite, microcline, smoky quartz, goethite, and topaz found in the pegmatites and granites (in miarolitic or gas cavities) of the Precambrian rocks (see Blog 12/24/2013).  The local Lake George and Colorado Springs mineral clubs have members who are quite successful “specimen hunters”.  Both clubs also have mineral claims in the area and many individual members have personal claims. I refer readers to the blog of Mr. Rockhounding the Rockies at http://rockhoundingkw.blogspot.com.

One of the largest commercial mining companies is Glacier Peak Mining, a family-operated business owned by Joe Dorris, of Prospector TV fame.  I refer readers to their website (www.pinnacle5minerals.com/) for a description and photos of a few fantastic specimens.
Continuing west on U.S. 24, Precambrian igneous and metamorphic rocks considerably older (~1.7 Ga) than the Pikes Peak granite begin to crop out as the traveler ascends Wilkerson Pass crossing the Puma Hills and the Tarryall Mountains.  At the summit of the pass (9507 feet) Tertiary volcanics, with a source from the south, mostly cover the very top of the granite.  However, numerous mines, with accessible associated roads, may be seen to the north.  The mine dumps seem fairly safe and expose some beautiful specimens of micacous schist, including layers of almost pure biotite.  Other specimens of gneiss have books of mica approaching one inch in length.  Streaks of green to blue indicate the presence of copper minerals, and tourmaline was noted; however, neither azurite nor malachite was located on my most recent trip.  Garnets were sparse and although Pearl (1972) noted the presence of epidote and galena, neither was located.  At one abandoned mine, the prospectors were digging in a very coarse-grained rock where large pieces of rock quartz were quite evident.  As usual, inquire about land ownership at the U. S. Forest Service office, do not enter shafts, and stay away from abandoned buildings.