I recently received a small box of minerals from a friend in Custer, South Dakota (June), and included was a specimen of mitridatite.  As usual, I was completely unfamiliar with this calcium iron hydrated phosphate [Ca2Fe3+++(PO4)3O2-3H2O], but decided to learn more.  Perhaps the most interesting aspect is that most of the time (from locations that I can observe on MinDat) the mineral is found in granite pegmatites (usually late stage).  However, at its type locality in the Crimea peninsula mitridatite is found in oolitic sedimentary iron ores.  The commonality is that in almost all occurrences, mitridatite is an earthy green (at least some stage of green from yellow-green to brown-green), compact mass coating other [earlier stage] minerals.  It is quite soft (~2.5 (Mohs), and crystals are rare (certainly none on my specimen).  At times, mitridatite may form pseudomorphs after other phosphate minerals but any determination like that is above my pay grade.

Mitridatite seems in solid solution with both arseniosiderite and kolfanite---just substitute the arsenate radical (AsO4) for the phosphate radical.

My specimen is a hunk of bull quartz with a thin coating of mitridatite on a broken surface.  The specimen came from the Bull Moose Mine in the Black Hills of South Dakota.  Although substantial effort was exerted, I could find very little information about the Bull Moose except that it is an abandoned feldspar-rose quartz-beryl-muscovite-tantalum mine in a granite pegmatite located 5 km SE of Custer (MinDat, 2014), and that the mine is well-known for producing rose quartz and a variety of other rare phosphate minerals (Loomis, 2014).

I have written numerous postings on minerals associated with the Black Hills—they are among my favorite places to camp and collect and sample microbrews.  Lufkin and others (2009) noted the “Black Hills is famous for its diversity in both common and rare minerals…there are over 300 distinct species described in the literature…The lithium-rich zoned pegmatites such as the Etta, Bob Ingersoll, Tin Mountain, and Tip Top have the most mineral species…80 confirmed minerals have been found at the Etta and Tip Top mines.”  In addition, the pegmatites are famous for their microspecimens of phosphates.

In past years Scott’s Rock Shop in Custer displayed a large boulder (~4 x 2 feet) in front of the store.  I had glanced at the specimen several times and simply assumed it was quartz since it had that “quartz look.”  A couple of years ago I met the store clerk (June) and she told me about the massive apatite coming out of the Bull Moose.  Of course I was interested and she said something like “go take a look at the large piece in front of the store.”  Out I go but could not see anything but the large “quartz” boulder!  OK, I made a big mistake---a substantial part of that boulder is massive fluorapatite.  What confused me in my elementary understanding of mineralogy is that I always had seen apatite in nice green, blue, yellow violet, etc. hexagonal prismatic crystals (or in faceted stones).   I had never observed massive apatite--did not know about any form except those nice little crystals we studied in mineralogy class, and later observed at most rock and mineral shows and exhibits.  What do you know!  My friend was nice enough to haul a couple of samples from her vehicle and send it home with me.

Fluorapatite [Ca2Ca3(PO4)3F] is the most common phosphate mineral found in the Black Hills. Roberts and Rapp (1965) noted that “olive-green to very dark greenish-brown masses of fluorapatite up to one foot across have been observed at the Bull Moose Mine.”  Alas, the boulder in front of the rock store now has been reclaimed by the owner—but I have photos and samples.

I also have in my small collection a thumbnail-size specimen picked up many years ago and labeled “Bull Moose Mine, Custer County, SD, Black Hills.”  In examining the specimen I was able to recognize beautiful tiny violet spheres of radiating crystals:  strengite associated with rockbridgeite.  Strengite is an iron phosphate [FePO4-2H2O] that is in solid solution with variscite [AlPO4-2H2O].  The former is the iron-dominant series end member while variscite is the aluminum-dominant phosphate at the other end.  However, I believe most strengite has small amounts of aluminum present and small amounts of iron in variscite will allow the normally green mineral to acquire a mild violet hue. 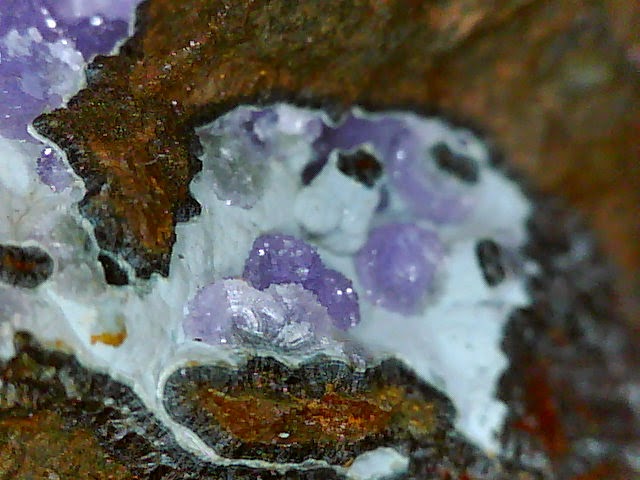 Most strengite is found as spherical rounded aggregates, radiating sprays, or as individual crystals.  It is found in a wide variety of colors with some sort of a violet color the dominant form although I have samples that are transparent, gemmy and almost colorless.  It has a vitreous luster and if you can complete a hardness text the result will come out ~3.5 (Mohs). The spheres are transparent to translucent and quite brittle.  When broken and observed under high power binocular scopes, the spheres reveal tiny radiating crystals.  However, there are instances where individual prismatic, bladed or tabular crystals are noted.

Strengite also forms a solid solution series with scorodite.  When this happens the phosphate radical is replaced by an arsenate radical and emerges as FeAsO4-2H2O. 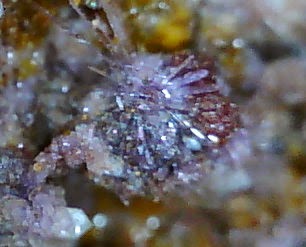 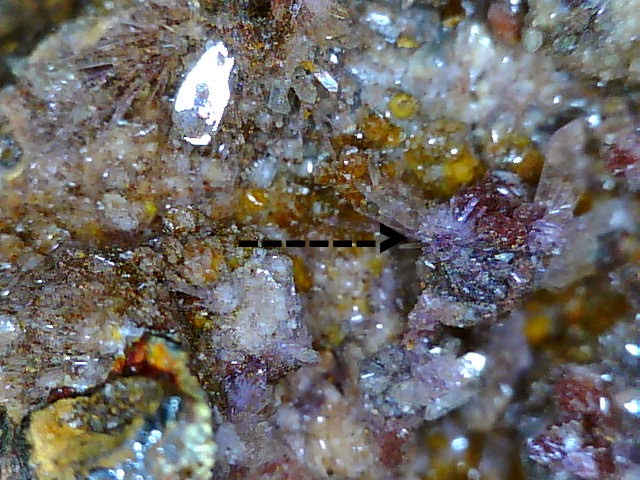 The other interesting mineral on this thumbnail specimen from the Bull Moose is rockbridgeite (I think), an iron phosphate hydroxyl.  It is of interest to mineralogists for a number of reasons, not the least of which is the presence of both ferric+++ and ferrous++ iron, an indication of organic material during oxidation:  Fe++Fe+++(PO4)3(OH)5.  Usually rockbridgeite contains some manganese (Mn++) substituting for the ferrous iron.  If there is a complete substitution then frondelite becomes the manganese-dominant end member of this solid solution series.  If zinc substitutes for the ferrous iron then plimerite is the new mineral.  All of these minerals seem to form from the oxidation of primary iron and phosphate minerals in granite pegmatites, or as oxidation minerals in “iron-bog” sedimentary deposits.

My note:  my specimen could just as well be frondelite, the manganese-iron phosphate in the solid solution series.  It is so similar in appearance to rockbridgeite, and in some specimens the mineral in question seems to appear between rockbridgeite and frondelite.  However, for convenience, I will call it rockbridgeite!


Rockbridgeite occurs in a variety of dark and earthy colors:  brown, black, green, yellow-brown.  Most rockbridgeite is massive or botryoidal and often forms a crust on other minerals.  In my small specimen the mineral forms a crust composed of “lumps” or mammillary structures that, when broken, display radiating tiny crystals.  In addition, the rockbridgeite is present as small seams that show the crystals when observed in cross-section.  However, in many instances rockbridgeite is just a number of small dark (brown or black) nondescript lumps/bumps.  The mineral observed on my specimen is actually quite impressive.

The Black Hills are famous for phosphate minerals, many of them tiny, colorful, and rare.  Tom at Dakota Matrix is probably the expert on these phosphates and I thank him some help with the minerals.  Visit his web site noted in the References.