Sand in reality is nothing else than very small stones.
Axel F. Cronstedt

In the world of geological terminology, sand refers to unconsolidated sediments with particle sizes ranging from 1/16 mm (sugar grain size) to 2 mm (BB size).  Sand particles are visible to the naked eye with silt being smaller (cannot observe grains without magnification; grits in your teeth with tasting) and clay the smallest particles.  Pebbles, or gravel, are larger than sand grains.  Sand is composed of rock and mineral fragments derived from previously existing rocks, and then deposited by forces such as wind, streams, gravity, waves, tides and currents.  Here in Colorado we are most familiar with sand composed of either quartz or feldspar fragments---eroded from the igneous and metamorphic rocks that core the mountain ranges..  However, in visiting Florida one would find sand with high percentages of fossil fragments or limestone.  On the island of Hawai’i is Papakolea Beach, a “green sand” beach where the sand particles are pieces of olivine eroded from nearby volcanic basalt.  At White Sands National Monument in New Mexico the sands are particles of white gypsum.

Sandstone then refers to consolidated (hardened) sand, with siltstone (massive), shale (fissile) and claystone being the consolidated rocks of clay and silt.  Conglomerate (rounded particles) and breccia (angular particles) are rocks with pebble and larger size components.  The consolidation of particles takes place by either compaction or cementation with the latter common in sandstone and conglomerate.  The cement precipitates in the pore spaces between the sand grains and commonly is either calcium carbonate (CaCo3), silica (SiO2), or iron oxide (Fe2O3).  The nature of the cement also plays a role in the color of the sandstone.  For example, a small percentage of iron oxide in the cement will impart a bright red or orange color to the sandstone. However, in many cases not all pore spaces are completely filled with cement and buried sandstone may serve as a water aquifer, or be saturated with petroleum. 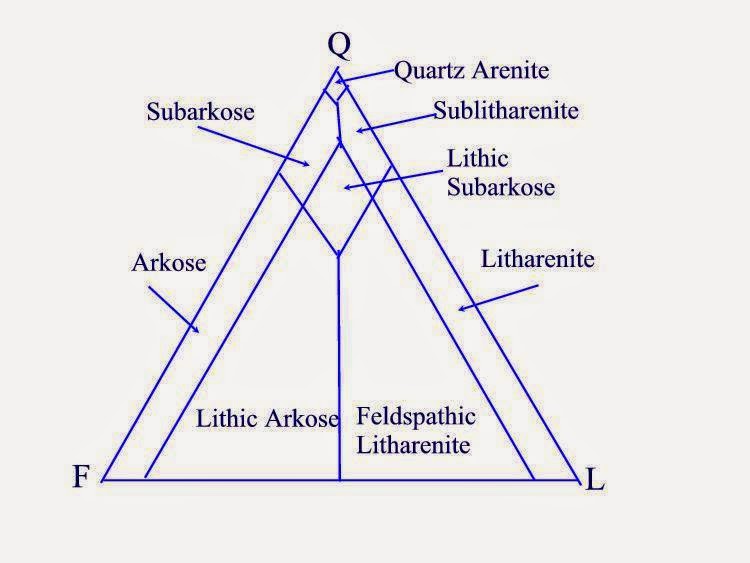 A QFL Composition Diagram used to plot minerals and identify sandstones. From a lecture by Earle McBride.

Field geologists often use adjectives or qualifiers to describe different sandstones such as feldspathic sandstone (or arkose) for sandstones with a high percentage of the various feldspars, quartz arenites (arenite=sandstone) with a high percentage of quartz, etc.  After returning to the laboratory the geologist might make “thin sections” so that individual grains may be counted under a petrographic microscope.  Samples may then be plotted on a Q(quartz), F(feldspar), L(lithic=rock) diagram  for a more precise identification.  This thin section work, and subsequent plotting, then informs the geologist about such things as textural maturity and composition, which in turn is used to help interpret the depositional environment of the original sand.  For example, sandstone plotting in the far left margin, lower quadrant of the triangle (arkose) would indicate erosion of a feldspar-rich source rock without a long distance of transport.  Locally, many of the sandstones in the Fountain Formation (in Colorado Springs think Garden of the Gods and Red Rock Canyon Open Space) are feldspathic sandstones derived from the nearby feldspar-rich Pikes Peak granite.  The angularity of the individual particles indicates a short distance of transport.

Greywacke (informally called dirty sandstone) has a particular type of matrix (clay particles between the rock grains and cement) plotting toward the lower right corner of the triangle.  This is significant since one would not normally expect clay particles (fine) and rock/mineral fragments (sand) to be deposited together.  However, modern oceanic studies have shown that submarine avalanches and turbidity currents are able to churn up the sediments on the edges of the Continental Shelf (sloping down to the trenches) and deposit these mixed size particles.  This understanding then allows geologists to more accurately place continents in constructing paleogeographic maps (maps detailing positions of continents and oceans in the geologic past).  The greywackes that I am familiar with include the great Franciscan Group of the Coast Ranges in California, several in the Precambrian of the Canadian Shield (around the U. S. Great Lakes), and rocks comprising the core mountains of New Zealand.  There are smaller exposures of greywacke in some of the Precambrian rocks of Colorado; however, they are not common.  A reasonable explanation might be that what we now know as Colorado has been part of the more stable continental interior (termed the craton) since the end of the Precambrian (last ~550 m.y.).  The migration of marine waters on and off the craton was in a shallow water environment without a continental slope, continental shelf or deep oceanic basin.

The sandstones plotting out in the extreme upper part of the triangle are termed quartz arenites since quartz is the dominant (over 90 %) mineral.  Some of these sandstones are quite monomineralic with nearly 100% quartz.  Perhaps the most famous of these quartz arenites is the St. Peter Sandstone (Ordovician age) of the Midwest and Central Plains (also known as the Simpson Sandstone in Oklahoma and informally as the Ottawa sand).  The pureness of this sand (~99.5% quartz) has spawned a large glass making industry.  In Colorado, a similar formation is termed the Harding Sandstone from a locality near Canyon City.  The Harding perhaps is best known for producing some of the oldest vertebrate fossils in the world (as well as building stone for the local houses of incarceration).   Locally, some of the sandstones found in the Lyons Sandstone (at Garden of the Gods) are quite pure quartz arenites.  In reality, most of the sandstones found in Colorado (other than the arkosic Fountain Formation and its correlatives) plot somewhere in the upper 1/3 of the triangle---the mineral constituents are mostly quartz but other mineral/rock fragments are present.  The reason behind this fact is: 1) quartz is one of the most abundant minerals in metamorphic and igneous rocks, often the source for sandstones; 2) a high hardness [~7 Mohs] and a lack of cleavage make the mineral quite durable; and 3) quartz is chemically stable and has a very low solubility in water.   Sandstones are fairly resistant to erosion and therefore often form hogbacks, fins, buttes, cliffs, flatirons and “caprock”. 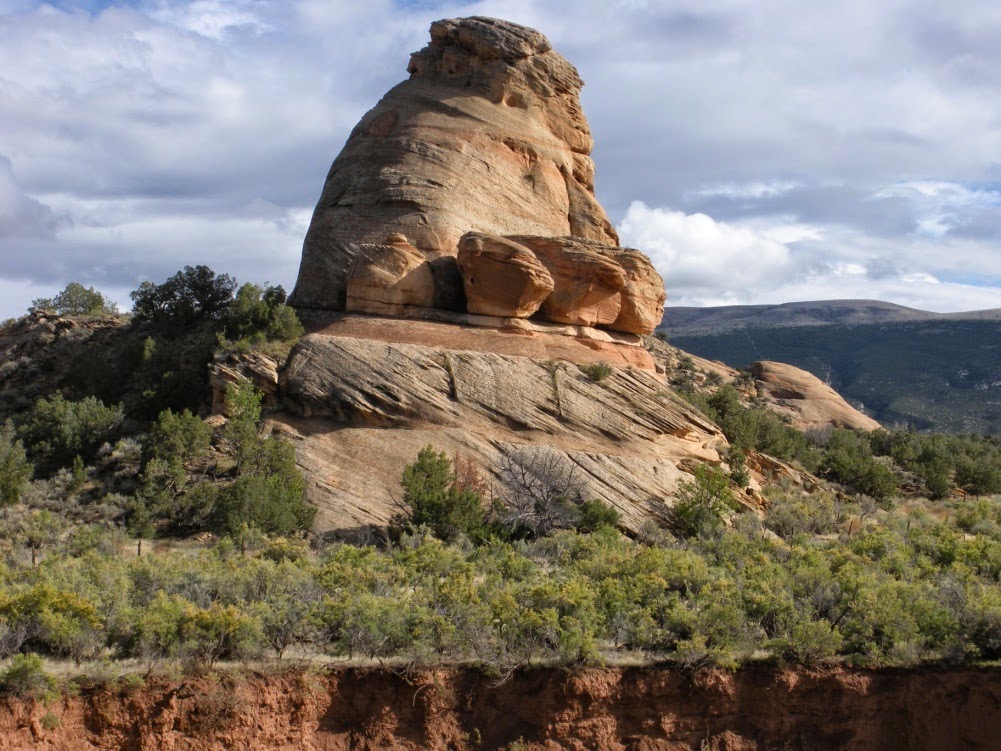 Now on to the quartzites, and I do mean plural as this term is used, perhaps to confuse people, as describing  both sedimentary rocks and metamorphic rocks!  Some of the quartz arenites, those rocks composed essentially of quartz grains, become so tightly cemented that the rock takes on a glassy appearance and is quite hard. In fact, geologists term these sedimentary quartzites as orthoquartzites. 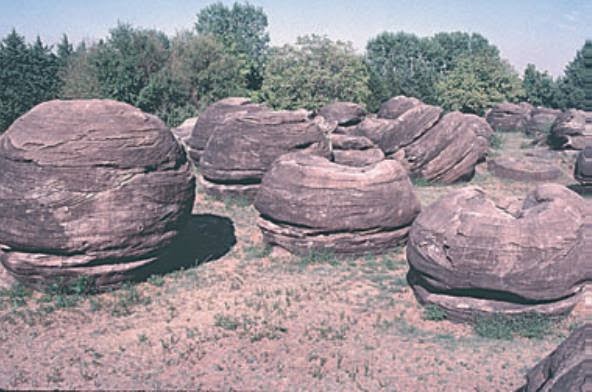 In Colorado, some sandstones of the Cambrian Sawatch Formation are called quartzite as the quartz grains are tightly cemented by silica.  In fact, one can find references in the geological literature to the Sawatch Quartzite (as opposed to Formation) as the name of the rock unit.  In central Kansas a resistant and hard unit of the Dakota Formation is cemented by calcite and locals call it the Lincoln quartzite and market the stone as road aggregate or “rip-rap” for stabilization of steep areas such as dam faces on reservoirs. The best exposures of this orthoquartzite are about 30 miles from Lincoln at Rock City.

One of the best known quartzites in the central part of the US is the Sioux Quartzite of Proterozoic (Precambrian) age that crops out in far eastern South Dakota and adjacent Minnesota.  The formation is mostly a tightly cemented, pink to red quartz arenite (orthoquartzite) that has been subjected, in places, to a very mild metamorphism---but not enough heat and/or pressure to term it a true metamorphic quartzite.  The outcrops are not all that common as most of the time they are covered in glacial drift.  However, the numerous quarries have produced millions of tons of this resistant rock for building stones and large rip-rap.  It seems as if tens/hundreds of miles of the Missouri River in South Dakota have seen its banks stabilized by large-scale hunks of that distinctive pink to red quartzite.  Many of these “hunks” (2 x 3 feet or so) contain well-formed sedimentary structures such as ripple marks and or cross bedding. 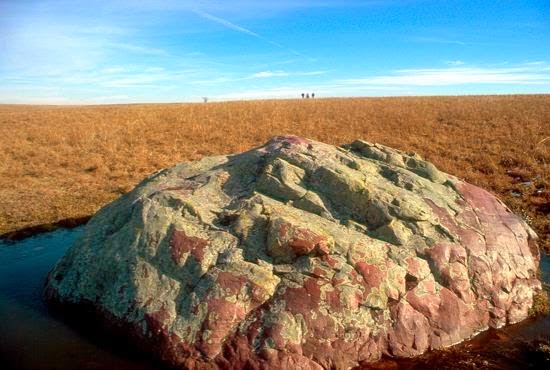 So, the Sioux Quartzite is sort of a hybrid consisting mostly of tightly cemented (quartz cement) quartz grains (orthoquartzite) but also containing areas where there has been some low cooking that has produced a few metamorphic minerals such as sericite and pyrophyllite, and fused a few individual grains together.

Metaquartzites are the true quartzites and are metamorphic rocks, formed when quartz arenites are subjected to high heat and high pressure in areas of regional metamorphism.  This metamorphism generally takes place along plate margins where some sort of plate collision or subduction is occurring.  In Colorado these metaquartzites are almost always Precambrian in age.

So, confusion may abound, and sometimes identification of a hard rock, with a glassy texture, and “sugary grains, is difficult!  However, the following hints will make life easier.  If you suspect the cement is either calcite or silica (clear), a drop of  hydrochloric (or similar such as acetic) acid will determine composition.  You should also examine any reaction with a hand lens to make certain the cement is “fizzing” rather than some included calcite grains.  If calcite cement is present then the rock is a quartz arenite or orthoquartzite as any calcite cement in the original rock would have been destroyed with later metamorphism.  Examine a fresh surface of the rock with a hand lens and observe the individual grains.  In a sedimentary quartzite one can observe: 1) the cement; 2) the rounded grains of quartz (usually not fractured and simply touching each other); and 3) the fact that usually the rock breaks between the grains.  In a metamorphic quartzite: 1) the grains are commonly fractured,  “squashed and squeezed” , and recrystallized during metamorphism; 2) the cement is recrystallized and “blends in” with grains to give the rock a quite glassy appearance; and 3) the rock breaks through the grains. 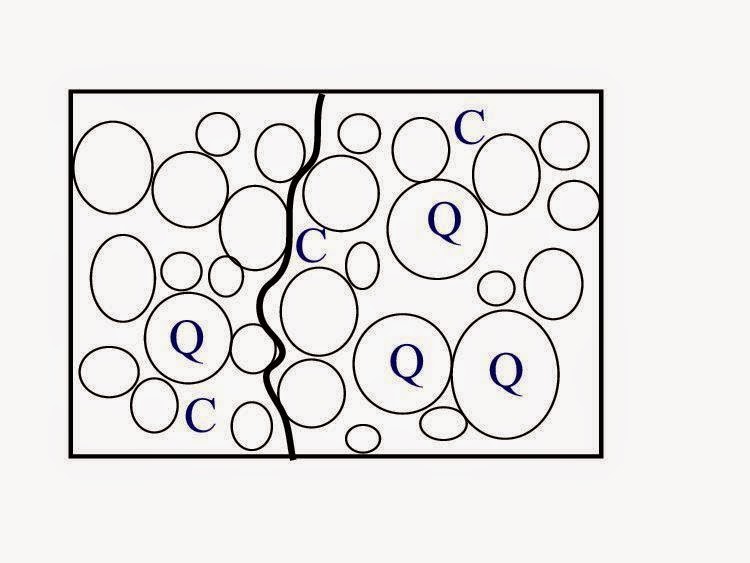 Cartoon of a metaquartzite thin section.  Note compressed and fractured Quartz grains and the break is through the grains.  The space between the grains is recrystallized quartz. Public Domain sketch.

I see pieces of sandstone virtually every day of my life but rarely give them a second thought.  However, trained geologists can determine a wealth of information from what appears as a simple “stone.”  Universities teach entire courses on the identification and classification of sandstones (I know from past experience).  I read somewhere that several hundred classification schemes have been proposed for sandstone---that appears to be overkill!  I also read about collectors specializing in acquiring vials/jars of unconsolidated sand from localities around the world.  Next time that you visit a beach or a river collect a small bottle of sand and take it home and examine particles under a scope.  I think that you will be surprised with the complexity of the different grains.