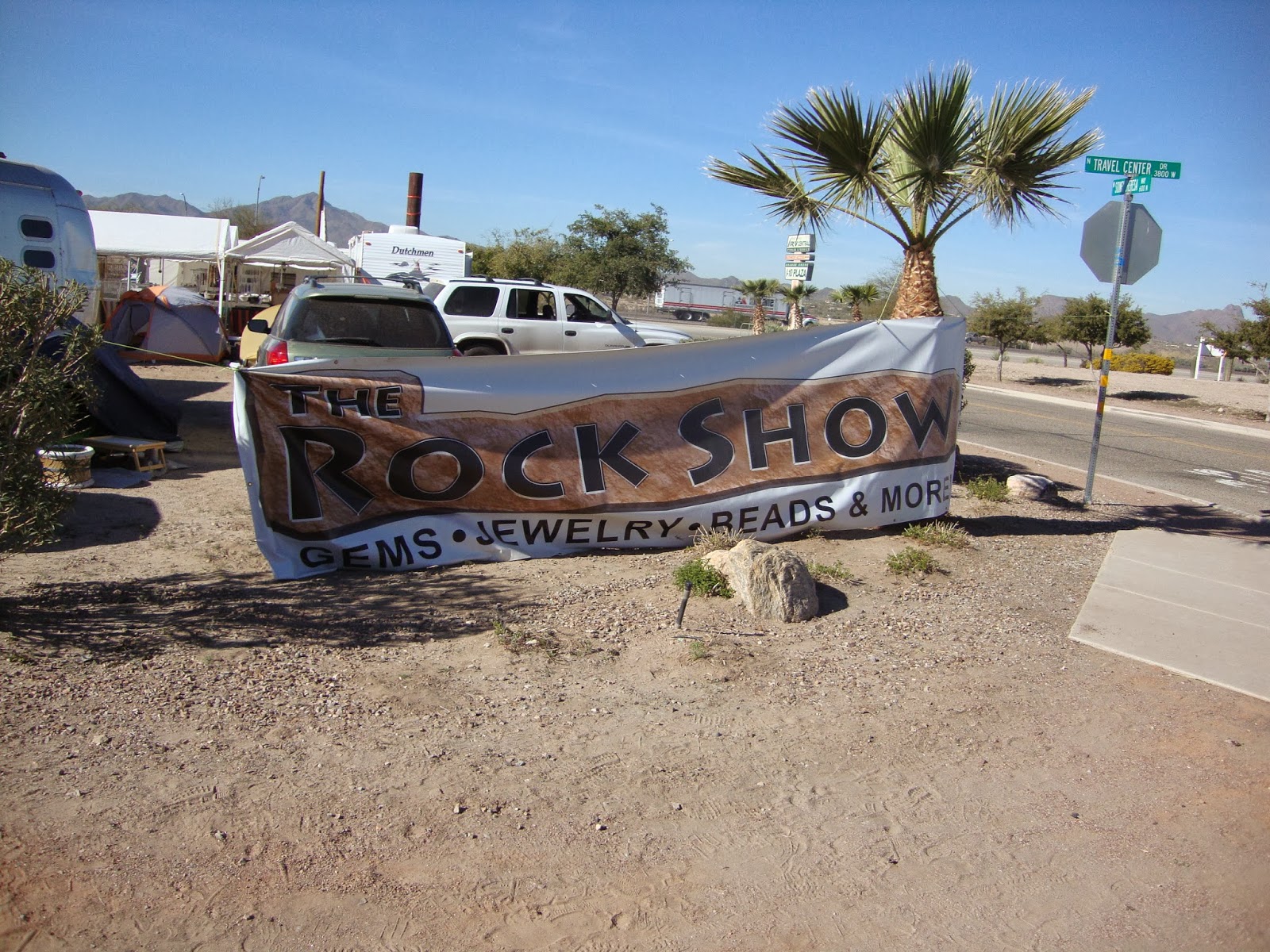 One of the really exciting aspects of the Tucson Shows, at least for me, is a chance to visit some of the satellite shows scattered around the city.  These shows are sometimes centered around a motel/hotel such as the Hotel Tucson City Center, or a “really large” tent-like structure (22nd Street Show), a permanent building (Mineral and Fossil Co-Op), individual booths/tents/trucks in a parking lot (Miner’s Co-Op), or a mixture of booths and the “really large” tent-like structures (Kino Gem and Mineral Show).  Some handle only “high end” gems (The Westward Look Show) while several specialize in beads (Tucson Bead Show).  I have even seen pickups parked in empty lots selling “rocks” or whatever (not associated with any official show).  Usually the “official” vendors sell “something” associated with rocks, gems, minerals, beads, equipment but I have seen sunglasses and “coon skin hats” for sale.  These entire activities make for a fantastic array of sale items at all prices—from two minerals for a dollar to individual crystals costing tens of thousands of dollars. And these public sales don’t take into account all of the private transactions taking place around the city, often before the shows even begin.  Tucson is an event, something on the bucket list of almost any mineral collector or lapidary.


My favorite satellite shows are those: 1) where the specimens are more reasonable in price; and 2) where some really nice paleontological specimens are displayed.  The Miner’s Co-Op was a new show this year and was situated in a parking lot near the Orange Grove and Interstate 10.  Many of these small vendors were, in past years, located on the soccer field east of Kino Park.  The scuttlebutt is that the field owners decided to remove the vendors this year?  At any rate, I certainly enjoyed visiting with these “mom and pop/back of the truck/from the camper” vendors who seem to represent what rock and mineral collecting is all about—for the “average” buyer.  Kim and Bodie from Running Boar Minerals (see above photos) in Woodland Park, Colorado, just up the road from my home in Colorado Springs, was set up and selling nice crystals of Pikes Peak Amazonite http://tucsonrockgemmineralshow.com/running-boar-minerals/.  They also facilitate the June show of the Colorado Springs Mineralogical Society (www.csms.us).


I visited the 22nd Street Show a couple of times since the large “tent-like” structure housed a number of interesting vendors.  There were some beautiful vertebrate fossils (casts) for sale and I was able to purchase some nice small minerals (collectors can never have enough vanadanite crystals).  Several “stars” from the Prospectors TV show were on hand to sell recently collected material, especially from Mt. Antero, and to sign autographs.  Amanda and Travis (members of the Colorado Springs Mineralogical Society) from Colorado Rocks had some nice aquamarines, both faceted and rough for eager customers.  See some of their adventures at: www.facebook.com/pages/Prospector-Amanda-Adkins/

The City Center Show has a quite large number of vendors scattered across the courtyard, in the ballrooms, in parking lot tents, and in all of the lower level rooms and several on the upper floors.  The Show has an amazing diversity of items for sale and one of the busiest vendors was the company selling packing material and boxes.

My favorite City Center Vendor is Glen Rockers from PaleoSearch Inc. headquartered in my old stomping grounds of Hays, Kansas (see 9-23-12 blog on amber).  I have known Glen from those early days and have admired his many finely prepared specimens (www.paleosearch.com).  Glen leases land from ranchers in the western part of the state in areas where the Smoky Hill Chalk Member of the Niobrara Formation is exposed, “the chalk.”  This Cretaceous unit, over the last 150 years, has produced an amazing number of large fossil reptiles (for example, mosasaurs), fish (for example Xiphactinus), invertebrates, and even the occasional dinosaur.  Natural history museums across the world often have fossils collected from “the chalk.”  This time Glen had collected and prepared a very nice bill fish called Protosphyraena.  He told me that the specimen is about 80% complete, including the skull.  During my time playing in the chalk collectors often found the rostrum (the bill) that had broken from an unknown skull.  In viewing the photo below remember that the rostrum actually supported a ?cartilaginous covering.  The famed fossil collector Charles H. Sternberg postulated in 1917 that the front teeth projected in a forward direction and the bill and teeth were used as a ramming device on other fish or mosasaurs.  I think paleontologists remain uncertain about the use of the bill and teeth; however, Sternberg seemed correct about the projecting teeth.  A great photo of  Protosphyraena is located at: http://animals.nationalgeographic.com/staticfiles/NGS/Shared/StaticFiles/animals/images/1024/protosphyraena-lw.jpg
The Mineral and Fossil Co-Op on Oracle Street is a show that I always try to attend although the paleontological specimens are far out of my budget and are museum grade.  With that said, attending this show is sort of like walking into a small natural history museum.


The Kino Gem and Mineral Show at the southern end of the city is always one of my favorite shows.  Here one can find giant rocks (4 feet) covered with azurite, giant quartz crystals, beads for everyone, chairs constructed from fossil wood, some really nice small specimens at reasonable prices, lapidary equipment, coon skin hats, and the ever numerous amethyst cathedrals.  There are a few “giant” tents, several small booths, and even several specimens displayed outside.  Of course rain had not hit Tucson since sometime in 2013 so weather was not a problem!

There are so many other shows scattered around the city and unfortunately it seems impossible, at least for me, to get around to all of them.  Perhaps if I arrived on February 1, I could make a run for it!
Posted by Mike at 9:05 PM No comments: