LÖLLINGITE: AN ARSENIDE FROM THE BLACK HILLS, SOUTH DAKOTA


I continue to be fascinated by minerals containing the element arsenic (As).  The arsenate minerals (arsenic is in a 5+ oxidation state) are those containing the anion AsO4- - - and are often grouped/studied together with the phosphate minerals [PO4 - - -] and the vanadate minerals [VO4- - -].  Since these three anions are about the same size with the same charge, minus 3, they often replace and substitute for each other and a new mineral is born. I have written many posts about the arsenates and they include a metallic cation plus the AsO4 anion (and often water or hydroxide) : annabergite (nickel), austenite (copper and zinc), clinoclase (copper), conichalcite (calcite and copper), cornubite (copper), cornwallite (copper), erythrite (cobalt), chenevixite (copper and iron), mimetite (lead), and olivenite (copper).  Examples, annabergite: Ni3(AsO4)2-8H2O.

The arsenic sulfides minerals are those containing arsenic in a metallic role and cation (As) and often combing with other metal cations, which in turn combine with sulfur (S the anion) to form a sulfide: arsenopyrite (iron), cobaltite (cobalt), enargite (copper), orpiment (arsenic), realgar (arsenic), proustite (silver), tennantite (copper). Examples, enargite: Cu3AsS4, and orpiment: As2S3.

The arsenide minerals have arsenic (As) as its major anion with a metal as the cation: algodonite (copper), domeykite (copper), nickeline (nickel), skutterudite (cobalt, nickel), löllingite (iron).  Example, nickeline: NiAs

This fall during a trip to the Black Hills of South Dakota I was able to add an arsenide to my collection, the not-so-common löllingite—iron plus arsenic, FeAs2.  Again, the iron is the positive cation while the arsenic serves as the negative anion.  Trying to describe löllingite is sort of tough.  It is a shiny, silver-white to steel-gray mineral with a metallic luster, a medium hardness of ~5.0-5.5, has a gray-black streak, is brittle, and has an “almost” conchoidal fracture. It can have significant amounts of nickel and/or cobalt substituting for some of the iron.  It looks similar to arsenopyrite and other arsenides and is often confused with such.  I identified my specimen as löllingite since mineralogists have identified the Bob Ingersoll Mine as home to löllingite (and not arsenopyrite).  In the Black Hills löllingite is found in the various pegmatites associated with the Precambrian Harney Peak Granite while at some other localities it is associated with mesothermal igneous rocks (“medium” temperature and pressure). 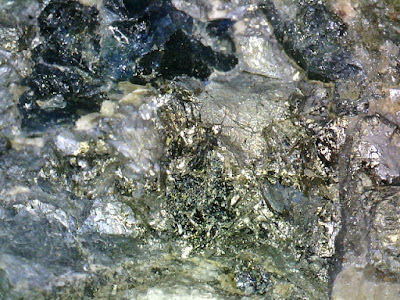 Photomicrograph of very "fresh looking" and silvery
löllingite. Width FOV ~1.0 cm.
The Bob Ingersoll Mine near Keystone in the Black Hills of South Dakota is one of the better-known mines in the area.  This “fame” is not due to gold or large crystals or ghosts but is because small crystals of elbaite (Tourmaline Group) that are enclosed in muscovite—an interesting situation to say the least.  Several years ago, rockhounds could hike to the mine, or visit a local rock shop and take-home numerous specimens.  This year, during my last visit, I did not see a single specimen available for purchase and a collector told me the mine was off limits!

The mineralization at the Ingersoll is found in five zoned pegmatite dikes that were intruded into a quartz-mica schist—all are Precambrian in age. The extracted ores (information from MinDat.org) produced tantalum (tantalite), niobium-rich columbium (columbite), tin (cassiterite), beryllium (beryl), lithium phosphates, feldspar, uranium, and micas (westernmininghistory.com).
Work at the Ingersoll started in the 1880s and ended in the mid-20th Century.  According to Tom Loomis, on his web site DakotaMatrix.com, the Ingersoll was the discovery site of several large crystals: “About 1915, a large beryl crystal was exposed at the Ingersoll, a nearly perfect hexagon 46 inches across the face. In 1933, another beryl crystal was exposed. This crystal was nine feet high and over eight feet wide and produced 24 tons of ore. A picture of this crystal appeared in the May 1934 issue of Engineering and Mining Journal. Yet another larger crystal was exposed in 1942. This beryl measured 19 feet long and five feet wide on one end and tapered to 19 inches at the other end. Dr. Frank L. Hess of the Rare Minerals Division of the Bureau of Mines during a short reconnaissance trip in September of 1908 to the Black Hills visited the mine and wanted to make a national monument of the crystal (Johnson, 1989). The crystal was eventually mined. The largest crystal of amblygonite was mined at the Ingersoll measuring 28 feet long and six feet in diameter. Blake (1884) reported a 20-inch square by 24-inch long columbite crystal calculated to weigh one ton. Large masses of uraninite have been reported…”

By the way, the trip to the Black Hills was the last part of September when the trees were turning, the bison roaming in the prairies and the smell of frost was in the air.  Life is good.

Lighten up, just enjoy life, smile more, laugh more, and don’t get so worked up about things.      Kenneth Branagh