In wandering through my collection of minerals brought home from the 2016 Tucson Show, I came across a specimen of emmonsite.  I reached to the back recesses of my mind trying to remember why I purchased such a specimen.  Yes, it is a nice green-yellow color and looked interesting under the loupe but then I remembered—I was going to check and see if emmonsite was named for the famous geologist Samuel Franklin Emmons.  Well, I finally got around to checking and sure enough emmonsite [Fe2(TeO3)3-2H2O], a fairly rare iron (ferric) tellurite, was named for a well-known geologist that Colorado has sort of claimed as a native son (although he was born in Boston in 1841 and descended from a long line of native Bostonians—lineages arrived in the 1630s), or at least a favorite son.
The following information is abstracted and interpreted from Hague (1912) who wrote a “Biographical Memoir” of Emmons published by the National Academy of Sciences.  Emmons was one of those “old fashioned” geologists, attending private primary and secondary schools in Boston and finishing up at the Dixwell Latin School.  Emmons was educated to become a gentleman of broad culture, refined manners, and to enter Harvard University, which he did at age 17, and graduated in 1861.  When I first read “1861” I wondered why he did not enlist in the U.S Army since Harvard furnished a number of students to the anti-slavery movement.  Hague (1912) noted that Emmons’ father persuaded him to pursue a professional career, rather than to follow many classmates into military service.  To further discourage enlistment (I presume), Emmons was sent by his father, after graduation, to Europe in order to accompany his mother on a health recuperation trip.  He seemed to have spent the summer of 1861 climbing mountains and hiking, and presumably taking care of his mother.  She sailed back to the States in November while Emmons toured London and ended the year in Paris.  In the City of Eternal Light, Emmons spent nine months working under private tutors in order to relearn French and prepare for entrance exams to the prestigious Ecole Imperiale des  Mines  (School of Mines).  Emmons spent two years at the School of Mines and then decided he wanted to get a more practical mining experience (hands-on) so spent the next year (1865) at the Bergakademie (Mountain Academy) at Freiberg, Saxony, Germany (where there were mines at the city limits).   After leaving Freiberg, Emmons spent the winter in Italy and finally returned to Boston in June 1866 (probably to the delight of his family since the conflict was over).
As a graduate student at the University of Utah, I fell “in love” with reading about the geological exploration of the American West via the Great Surveys:  F.V. Hayden and the United States Geological Survey of the Territories; Clarence King and the Geological Exploration of the Fortieth Parallel; John Wesley Powell and The Exploration of the Colorado River and its Canyons; George M. Wheeler and the many volumes of Explorations and Surveys West of the 100th Meridian.  These surveys of the western United States ultimately were reorganized (1879) into the United States Geological Survey. 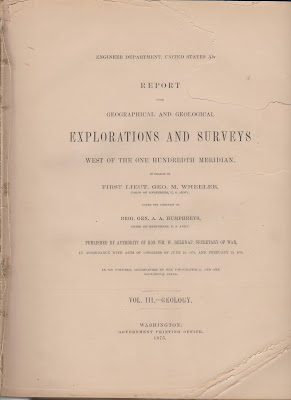 This is one of those postings that started out as a simple discussion of the Colorado Scientific Society and its first president S. F. Emmons.  However, it morphed into the fascinating world of tellurium and the resulting minerals.  I am still trying to digest some of the information but needed to draw a conclusion line---somewhere!  Unfortunately, the length and breadth of the subject may turn off all but the most dedicated readers and for this I apologize.  But, just as a dog worries a bone I worry a subject that I don’t really understand.  The good thing is that “new learning” is a joy for me and hopefully keeps my brain alive. My philosophy about learning may be summed up by two rather famous individuals:

Anyone who stops learning is old, whether at twenty or eighty.  Anyone who keeps learning stays young.   Henry Ford

Every time I learn something new it pushes some old stuff out of my brain.    Homer Simpson