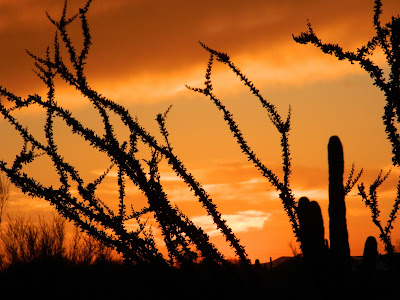 While traveling I always attempt to use an internet search engine (is “goggle” an official verb?) to locate rock and mineral shops for a possible visit.  Unfortunately, many shops listed as such are nothing but purveyors of amethyst, quartz points, citrine, salt lamps, sodalite, pyrite, and maybe an agate or two---all arranged on nice shelving with spiritual attributes spelled out in bold letters.  However, once in a while I stumble across a store, somewhat dusty, that is stacked with shelves filled with beer flats full of minerals, slabs, rocks, picks, books, and all sorts of interesting items.  Most often these latter stores have wonderful proprietors who are willing to share their knowledge of local geology (and often beyond) with willing listeners. I found such a store in Old Cottonwood, Arizona, under the name of Jim and Ellen’s Rock Shop!  After a couple of visits an invitation was thrown out to attend the upcoming meeting of the Verde River Rockhounds (I did so)!

Anyway, I am always on the lookout for interesting minerals, something “strange”, for my modest collection.  So, when perusing the shop, I came across a different sort of mineral with a name that was totally unfamiliar---cervantite---and sporting an “old” label (typed with a manual typewriter). Ms. Ellen checked a reference and told me it was an antimony mineral.  Good enough for me since I already had a specimen of stibnite and one can never have enough minerals with antimony!  And come to think about it, cervantite actually seemed to have a crystal shape resembling stibnite.  So, a purchase was made.
Antimony (Sb) does occur in a native state although it is fairly rare in the mineral record.  However, antimony readily combines with numerous other elements, especially sulfur; therefore, it is not uncommon to find antimony as a minor element in many sulfides. The common ore of antimony is stibnite (Sb2S3) although the metal is also produced as a byproduct of mining copper, lead, and silver—for example tetrahedrite (Cu12Sb4S13).

Stibnite is a nice collectable mineral featuring long, acicular, slightly curved, clusters of crystals.  Many are twined crystals with the result being a spray as one crystal bends “right” and the other twin bends in the opposite direction.  Stibnite is a very soft mineral (2 Mohs), has a metallic luster, and sort of a lead-gray-silver color.
A long time ago, late 1960’s, I collected a specimen from the Antimony District in Garfield County, Utah, that looks like massive antimony to me.  However, the references all point to the sulfide, stibnite, rather than the raw metal antimony.  So, I suppose a mineralogist was able to “chemically” identify the mineral coming from the mines as stibnite.  However, the Utah specimen is massive without visible, long, acicular crystals.
So, what about the cervantite?  Turns out that stibnite is easily oxidized and cervantite is a secondary antimony oxide (SbO4 or actually Sb3+Sb5+O4).

In addition, cervantite is commonly a pseudomorph after stibnite and therefore the original crystal form (acicular crystals) of stibnite remains.  In some mineral districts both stibnite and cervantite occur together (along with other oxidation antimony minerals).

As I understand the situation, antimony is no longer mined in the United States and most metal is imported from China.  However, I did locate a


website of United States Antimony Corporation that states the company:
has produced various antimony, silver and gold products since 1969. USAC originally mined antimony in Montana but now mines antimony from its own properties in Mexico and receives other raw materials from non-Chinese sources throughout the world. The Company is fully integrated, including mining, transportation, milling, smelting, and sales.  USAC operates the only significant antimony smelter in the United States.
Antimony is rarely used in its pure form; however, it is commonly alloyed with other metals.  Much antimony is used to harden lead that in turn is used in the plates of batteries. An alloy of tin, copper and antimony is used in the manufacture of machine bearings.  Tin and antimony is called pewter and is used in various cups (especially beer mugs), tableware, and wheel weights.  There are numerous other uses of antimony including fireworks, flame retardant clothing, and paint pigments.

The “moral of the story” is to stop in small rock shops, enjoy the displays, and purchase a mineral or two.