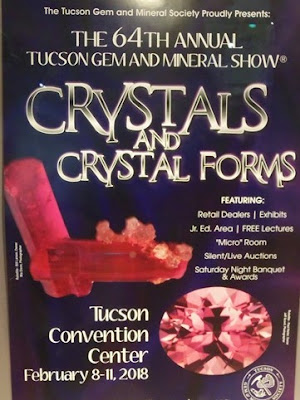 Well, it has finally arrived, or at least I have arrived in Tucson to bum around at the Tucson Gem, Mineral and Fossil Shows.  At my best count there are ~60+ different venues/shows this year anchored by the Tucson Gem and Mineral Show® (TGMS) scheduled for the Tucson Convention Center February 8-11.  Most of the other venues/shows run during the two weeks preceding the end of the TGMS—in other words about the first two weeks of February, give or take a few days on either end.  My goal this year is to visit 15 or so of these ancillary shows.  Some of these other venues are huge; for example, the G&LW Tucson Show/Holidome has over 500 booths (as best as I count count) while other small shows have a half-dozen booths.  Some shows are in hotels and utilize individual rooms while others, such as the large 22nd Street Show, erect giant, and I mean really large, tents.  Other more “mom and pop” shows have dealers selling from trailers or individual sun/rain protectors or pickup beds open to the elements.  There are several venues that specialize in specific areas---perhaps beads, fossils, high-end minerals; however, most are a mixture of “everything” from clothes to rugs to dinosaur mounts to all sort of minerals and rocks.  In addition, specific shows such as the large JOGS Tucson Gem and Mineral Show are restricted to wholesale buyers and “buyer tags” are required for entrance. All in all, the shows/venues represent an amazing experience.

One of the first shows I headed for was the 22nd Street Mineral Fossil and Gem Show, a cornucopia of pleasures.  My major purchase was a grouping of Brazilian tourmaline crystals.  No, the crystals were not gemmy but I liked the piece for display and it was in my monetary range (cheap) of $5.

Tourmaline is now classified as the Tourmaline Group with several end-member species created by common solid solution series.  Virtually every member of the Group seems in solid solution with other members.  Every few years a new classification pops up.  For example, on 1 February 2018, I noticed an abstract by Bosi stated that his new study “has direct implications for the tourmaline nomenclature, as well as on petrogenetic and provenance information. Some assumptions behind the classification scheme of tourmaline have been reformulated, revealing major agreement and significant improvements compared to earlier proposed scheme.”  So, if you want the newest scoop locate his paper in the American Mineralogist. Otherwise I will offer some generalities.

Tourmalines (refers to the Group) are boron silicate minerals with a large variety or combination of calcium, potassium, sodium, aluminum, iron, lithium, vanadium, magnesium, manganese, chromium cations (the positive charged elements) thrown in. For example, the well known variety elbaite is: Na(Al1.5Li1.5)Al6(Si6O18)(BO3)3(OH)3OH. The chemical formula is really hard to understand but I will toss out the general formula from www.mindat.org:

A = Ca, Na, K, or is vacant (large cations);
D = Al, Fe2+, Fe3+, Li, Mg2+, Mn2+ (intermediate to small cations - in valence balancing combinations when the A site is vacant);
G = Al, Cr3+, Fe3+, V3+ (small cations);
T = Si (and sometimes minor Al, B3+);
X = O and/or OH;
Z = F, O and/or OH.
As you can guess there is much cation substitution, so the group has many different varieties; MinDat lists 39 different “kinds” of tourmaline.  A couple of members that many of us recognize would include the common black schorl (iron rich form and the most common variety in rocks) and the pink elbaite. Bosi (2018) noted that “tourmalines form the most important boron rock-forming minerals on Earth.”
Elbaite, a sodium lithium aluminum boron silicate (in the formula above sodium would occupy Position A of large cations while lithium and aluminum occupy Position D of smaller cations). It is probably the most colorful of any of the Group members and in some case even bi-or tri-colored (for example the popular watermelon tourmaline with zoned crystals displaying a green outer layer over a pink center).  The best known colored elbaite is probably the pink variety (sometimes termed rubellite), and that is what I purchased. Elbaite belongs to the Hexagonal Mineral System and often is found as elongated prismatic, striated crystals without cleavage.  They also have a very distinguishing rounded triangular cross section.  Gemmy varieties are vitreous and transparent while less gemmy crystals are more translucent.  Tourmaline is about the hardness of quartz at 7.0-7.5 (Mohs) and gemmy crystals of many colors are in high demand for faceting, carving and cabochons.

The seller stated that the specimen was from one of the mines in the State of Minas Gerais, Brazil-----an area of hundreds or thousands of mines.  MinDat states that “probably the best known of these are the pegmatite minerals like tourmaline, beryl, quartz etc. that come from the pegmatites in the north west granitic region of the state and whose center, business wise if not geologically is the town of Governador Valadares.”  So, I will settle for that general area!

The pink color of elbaite is probably due to the high lithium content; however, this variety also occurs in about every color of the rainbow and I am uncertain about other color chromophores.   In fact, I have heard of elbaite referred to as lithium tourmaline.  I also understand that the lithium (and the boron) is very important in lowering the magma solidification temperature.
So, the Tourmaline Group is a very complex assemblage of minerals and understanding much of the mineral chemistry is above my pay grade.  However, the various tourmalines often make spectacular gemstones and display specimens.  I was impressed in observing a very large “pile” of these masses of crystals at the venue.