February has rolled around again, and the month is special for Groundhog Day, Valentine’s Day, A. Lincoln’s and G. Washington’s birthdays rolled into President’s Day, Chinese New Year (2020 is the Year of the Pig), and the Tucson Rock and Gem Shows.  Of course, the latter is my favorite although I certainly respect the birthdays of our most famous presidents.
The Tucson shows occupy the first two weeks of February and culminate in the official Tucson Gem and Mineral Show (known as the main show) that is held in the downtown Convention Center on February 14-17.  Scattered around town are nearly 50 other “official” shows and venues.  Some of the ancillary venues are quite large with hundreds of dealers selling their minerals, rocks, fossils, coon tail hats, lotions better than Botox, and a wide variety of “you name it.”  However, most of the venues are related to geology, except perhaps the African Village.

In addition to the large venues there are many smaller shows with perhaps a dozen or so dealers.  However, small does not always relate to less expensive minerals and rocks---some are very high end such as the Westward Look Mineral Show.

My first day at the "Show" (refers to any of the venues) was on Monday the 4th since I arrived in town somewhat “late.”  On that particular day I had planned to hit a couple of outdoor shows where sellers are dealing out of small popup tents, or small RVs, or whatever but the tables are exposed to the elements ( I refer to them as mom & pop shows).  From what I understand this is how the smaller ancillary shows started out decades ago, before the advent of tents as large as a football field. Monday was also the day it decided to intermittently rain and I was soaked more than once.  I felt rather sorry for the dealers, but most come back year after year and just take the weather as it comes.

The Miner’s Coop is one of the first shows that visitors might see coming in from the north on I-10; however, it is one of the most difficult to reach as the two major exits have been closed for at least 2-3 years due to construction.  On my visit the crowd was sparse as the rain and mud put a damper on the selling and dealers were playing a cat and mouse game of pulling off tarps to expose their goodies and then covering the tables to try and keep them somewhat dry.  I did talk to Kim and Bodie (with their amazonite and quartz) from the Lake George region, a seller from Fountain and one from Pagosa Springs.  I really did not see all of the specimens available, due to covered tables, and so moved on without a purchase.

My second stop, Mineral and Fossil Marketplace, is also a favorite of mine mainly due to the presence of a dealer by the name of Jack Crawford.  Now Jack does not know me from the man in the moon but does recognize me from past years and if questioned, regales me with stories from his many years of collecting in Mexico.  He is a great person to visit with and someone with a terrific knowledge of geology, especially mining and minerals. He also has some of the finest crystals of boleite (hydrated lead-silver-copper oxychloride).  I have purchased some smaller crystals in past years as they are rather rare; however, this year he had much larger crystals and therefore out of my price range (see Posting June 22, 2016).

The second reason for a stop was to admire the wares sold at Australian Outback.  Now, I am not a collector of “slabs” or lapidary rough but do like to ogle the nifty displays from Australia.

I also was able to nab a specimen of wulfenite collected from Utah and was interested in the specimen for a couple of reasons.  First of all, wulfenite is the theme of the Tucson main show this year (Wulfenite is Loved) and second, I have an interest in minerals from Utah.  In addition, both Rock and Gem and Rock and Minerals devoted their recent journal editions to the mineral and forgot to mention collecting from Utah!
Wulfenite is probably one of the most easily recognized mineral among any amateur rock hound and one of the most collectable by hobbyists from all ranks, newbie to professional (7206 photos on MinDat). It is a beautiful mineral and easily adorns specimen shelves across the collecting community.
A lead molybdate [Pb(MoO4)], wulfenite is famous for its common habit of forming thin tabular crystals, often transparent (but ranging to opaque), that occur in various shades of orange to red to yellow (uncommon as green or brown or blueish or black (see Posting April 20, 2017) and “butterscotch” is a common color descriptor.  There is some disagreement about the color changes although minor chromium probably acts as a red or yellow chromophore.  Crystals often have a vitreous luster and will easily reflect light as a mirror.  Others are much “duller” and have a resinous luster; some are covered by various druzes.  The streak is a nondescript white. Wulfenite is quite soft at ~3.0 (Mohs) and the crystals brittle.  Besides the thin tabs, pyramidal (and bipyramids) and stubby crystals are common and often confuse new collectors who are used to orange or yellow tabs.
Wulfenite is a secondary mineral deposited in the oxidized zone of lead ores; it seems particularly common in the state of Arizona and Bladh (2019) noted at least 275 collecting localities.  Although collectors love isolated and single crystals the vast majority of  wulfenite probably occurs as granular or intermixed masses. 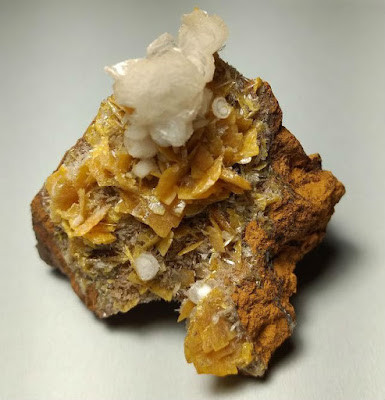 Wulfenite is much less common in Utah, than Arizona, and therefore “finds” at shops or mineral shows are exciting.  My particular specimen (shown above with crystalline calcite, width ~4.0 cm) picked up from this show was collected at the Tecoma Hill locality in Box Elder County, an area in the extreme northwest region of the State and former sites of lead-zinc-molybdenum exploration.  Most of the ore seems associated with Tertiary igneous rocks intruding Paleozoic limestone.