The Gold Hill Mine complex (AKA Western Utah Mine and the Clifton District) is located at the northern end of the Deep Creep Mountains in western-most Utah.  I first became acquainted with the mountains and the mining area during my stint at the University of Utah in the late 1960s. Later in life I had a vertebrate fossil collecting project near the western edge of the Deep Creeks but located in Nevada (Nelson and Madsen, 1987).  I remember the area as being one of the most desolate collecting sites that I worked, and made certain that my student assistants remained in visual site of each other.
The Deep Creeks are located along the Utah-Nevada state line about 30 miles south of Wendover, Utah/Nevada.  Yes, Wendover, Utah, holds the parking lot for the casinos at Wendover, Nevada.  The towns are about 120 miles west of Salt Lake City along I-80 in the Bonneville Basin (home of Pleistocene Lake Bonneville and the much smaller Great Salt Lake).

The town site of Gold Hill (at the mining complex) is still occupied by a small number of persons, and several dogs, which seem to enjoy the solitude and their freedom.  The mine was opened in the mid-1800s and closed for gold mining in the mid-1920s.  During the period of WWI the mines reopened to produce arsenic and in the 1940s (World War II) Gold Hill was reopened to produce tungsten; however, during the mine’s lifespan silver, lead, copper, lead, zinc were also produced.  The mineralization began at Gold Hill approximately 152 Ma as magma was intruded into the overlying Paleozoic rocks---rich in silver, gold, arsenic, copper, and lead (Robinson, 1993).  A second stage of mineralization commenced in the early to middle Tertiary (perhaps 38 Ma) when magma again intruded into Mississippian to Pennsylvanian sedimentary rocks---rich in silver, lead copper and gold In addition, extrusive volcanic rocks, ~8 Ma, created some low-grade beryllium mineralization (Ege, 2005; Robinson, 1993).  A much more extensive discussion of Gold Hill may be found in the Blog Posting on January 3, 2015: Gold Hill, Utah, Arsenates.

Gold Hill is famous among mineral collectors as MinDat lists 102 valid minerals plus several varieties. It is the Type Locality for Austinite and Juanitaite but the copper and arsenate (contain the AsO4 radical) minerals are often spectacular.

This small posting will document another addition to my small Gold Hill collection, the rare lead aluminum arsenate hidalgoite [PbAl3(AsO4)(SO4)(OH)6].  The specimen, with what I identified as hidalgoite, was picked up from a dealer and was noted as coming from the ?80’ level and is a product of weathering in the oxide zone of metallic sulfide deposits (containing lead).  Hidalgoite is sort of non-descript usually occurring as a druze or spherulitic encrustation; however, at the type locality (Zimapan Mining District, Hidalgo, Mexico) the mineral occurs as dense white masses.  In some localities the mineral is colorless; however, the specimens I have observed from Gold Hill are tan to orange to shades of green.  In addition, the Gold Hill specimens are usually associated with “limonite” and secondary rust coloration may hide the true color.  Under the rust the spherulitic encrustation of my specimen reveals microscopic crystals (appearing translucent) tending to a tan color.  I tried to determine hardness but will settle for MinDat specification: ~4.5 (Mohs). The luster is rather dull/earthy and the streak is white. 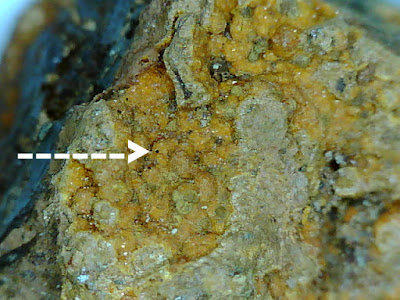 I also found a story in a 2014 edition of The Salt Lake Tribune stating that the BLM had given approval to Desert Hawk Gold Corp. to start up a cyanide heap-leach mine in the Gold Hill area---extracting the gold and silver.  I am uncertain if actual mining has commenced.
REFERENCES CITED