CUSTER, THE BLACK HILLS AND GOLD 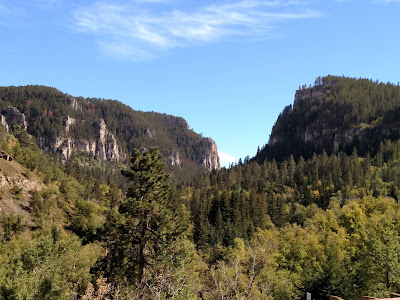 As I write this small posting in late September 2016 while camped near Spearfish and later in Custer State Park in western South Dakota, I am reminded that George Armstrong Custer seems always present here in the Black Hills.  Custer left behind the name of a town, a mountain peak, city streets and numerous motels, cafes, bars—you name it and Custer’s name will be affixed at some location in the Hills.  Of course he also left behind the beginning of the end for a large group of Native Americans who were soon to lose their ancestral hunting grounds and their nomadic way of life.  There seems no middle ground here in the west for Custer—like him for opening the Black Hills to mining and settlement or despise him for destroying the local population of Native Americans.  Not so much killing the Natives in firefights, but in opening the Hills to settlement which resulted in the resettlement of the Natives and their loss of a huge hunk of land.  The beginning of the end started with Custer’s expedition to the Hills in 1874 and the end came only two years later at the Battle of the Greasy Grass (AKA Battle of the Little Bighorn or Custer’s Last Stand).  Literally hundreds of books and articles have been written about Custer in the West and readers have their choice of authors.  Even today there are new tomes being published that win major awards.  It is tough for me to understand how new information seems to appear and therefore offers authors a chance for different interpretations.

At any rate, I am interested in the rocks and minerals that seem associated with the Custer expedition of 1874.  Thanks to authors like Ernest Grafe and Paul Horsted (2002), campsites and trails covered by the Expedition are well known and one can follow along the entire Black Hills’ route if desired.  Like many geologists and rockhounds I am greatly interested in the area around Custer City, the site of his “gold discovery.”

Lt. Col. George A. Custer was a Civil War hero (at least to the “North”) and at age 25 received the rank of Brevet Major General, and accolades poured in from the press for the “Boy General.”  At the conclusion of the War Custer remained in the U.S. Army and in 1866 was awarded the rank of lieutenant-colonel and assigned to a new regiment, the Seventh Cavalry.  Most/all of the regiment referred to him as General Custer.
It was hard for army officers to advance in rank after the war and certainly “reconstruction duty” in one of the former Confederate states was not a great stepping stone.  Custer viewed himself as a frontiersman and pathfinder and yearned to do battle with Native Americans occupying much of the Plains States, especially the loose confederation of the various Lakota bands (mostly Oglala and Hunkpapa), the Northern Cheyenne and the Arapaho.  Therefore, Custer was instrumental in convincing General Philip Sheridan, Commander of the Division of the Missouri and General Alfred Terry, Commander of the Department of Dakota, that a military reconnaissance of the Black Hills of the Dakota Territory was a necessity.  All three officers wanted to subdue, by whatever means (such as firefights, slaughtering the Buffalo [Bison] herds, etc.), the Native Americans occupying the Hills and the Powder River Basin to the west; however, an unpublicized argument was to confirm the presence of minerals rumored to exist in the Black Hills.  President Grant then approved the expedition since after the Financial Panic of 1873 the country needed new resources such as gold and timber, and any gold/mineral rush to the hills would also provide “jobs” for the many unemployed men (and a few women).

So, off Custer went on July 2, 1974, from Fort Abraham Lincoln across the Missouri River from Bismarck, North Dakota, with somewhere close to 1200 men.  Besides members of  10 companies of his 7th Calvary (including a 16 piece band), the group included ~110 wagons and accompanying teamsters, about 300 head of cattle for food in case the hunters could not produce game, a medical staff, several newspaper correspondents, the experienced miners Horatio Ross and William McKay (perhaps disguised as teamsters), several Native American Scouts, at least two of Custer’s staghounds, extra horses and mules, Chief Engineer Captain William Ludlow and his assistant (who produced wonderful maps), and Scientist George Bird Grinnell, a graduate student at Yale who later became a famous anthropologist, naturalist and writer, assigned to describe the flora and fauna.  Grinnell had three assistants: 1) Newton H. Winchell later became the Director of the Minnesota State Geological Survey and authored the six volume treatise entitled The Geology of Minnesota; 2) Luther North, a jack-of-all-trades best remembered for leading a group of Pawnee Scouts, along with his brother Frank, helping protect the Union Pacific Railroad and later business partners with William (Buffalo Bill) Cody); and 3) A.B. Donaldson, a botanist and newspaper “man” from Minnesota.  William Illingworth was the Expedition’s photographer who evidently was hired by Ludlow to provide photos for the U.S. Army.  The Expedition also included  at least one woman, a former slave known as Aunt Sally who cooked for Sulter John Smith.

The initial part of the trip through western North Dakota and northern Wyoming was hot and dry with alkaline water but the Expedition reached the northwestern outlier of the Black Hills (Bear Lodge Mountains near present Sundance, Wyoming) around July 20.  On July 25 they crossed the Wyoming-South Dakota state line and entered the Black Hills proper from the Northwest.
After spending several days traversing the center of the Hills (reaching the Needles-Harney Peak at the end of July) area the Expedition reached the area a few miles east of Custer at a locality termed Agnes Park and “Permanent Camp.”


The miners of the Expedition, Ross and McKay, had been looking for minerals, especially gold, during the last few days.  It seems they found a few flakes near what is now Custer City and additional flakes and tiny nuggets along French Creek that runs through the "Permanent Camp" (known as Custer’s Gulch).  Most of the gold found along French Creek came from prospectors digging a hole along the stream through the gravel and preferably down to bedrock.  They then panned the gravel and sand lying on the bedrock surface and removed the tiny flakes.  Altogether it was not a great find; however, the tiny bits of metal certainly caused “gold fever” among the members of the Expedition as noted by a reporter for the Inter-Ocean (as reported in Grafe and Horsted (2002):  At daybreak there was a crowd around the ‘diggins,’ with every conceivable accoutrement.  Shovels and spades, picks, axes, tent-pins, pot hooks, bowie knives, mess pans, kettles, plates, platters, tin cups, and everything within reach that could either lift dirt or hold it was put in service by the worshippers of that gold, gold…Officers and privates, mule whackers and scientists, all met on a common level, and the great equalizer was that insignificant yellow dust.

On August 3 Custer, not wanting to wait with the news of “gold in the Black Hills” until the Expedition returned to Ft. Lincoln, sent scout Charley Reynolds with a dispatch to Ft. Laramie in east-central Wyoming.  In glowing terms Custer over-exaggerated the gold discovery knowing full well that a rush would soon begin to the Black Hills!

On August 5, 1874, 21 claim-holders from the Expedition formed the District No. 1, Custer Park Mining Company, Custer’s Gulch, Black Hills, D.T. Aug. 5, 1874.  The discovery claim belonged to miner Ross while one of the other claimants was Sarah Campbell (Aunt Sally who held title to “No. 7 below Discovery”).  In reality, very few of the claim owners ever returned to the Black Hills, although historical records point out that miner Ross and Aunt Sally did live out their days in the Black Hills; neither became wealthy from the gold along French Creek.

The Expedition left the Custer City area with dreams of gold and headed north leaving the Hills in mid-August at a locality known as Custer’s Gap along Boxelder Creek north of Rapid City.  Either good work by the scouts or sheer luck allowed the Expedition to “discover” the gap through the upturned sedimentary rocks that allowed movement onto the Plains.  Near Bear Butte the Expedition camped for a couple of days to retrofit the wagons and then had a rather uneventful trip back to Ft. Lincoln arriving July 30th.
The Laramie Treaty of 1868 had awarded the Black Hills to the local Native Americans and forbid settlement by “outsiders.”  Custer left the Hills in summer 1874 but by December of that year the gold-seeking Gordon Party (28 persons) from Iowa evaded Army patrols and built a stockade near Custer’s Permanent Camp.  The group was evicted by the Army in spring 1875 but the floodgate had cracked open and by the fall thousands of potential miners were camping in Dakota Territory and trying to “sneak into” the Hills; some were successful while others were killed by Native Americans or turned back by Army patrols.  On November 3, President U.S. Grant decided the Army would no longer patrol and turn back the settlers and the “rush” was in full force and hostilities with Native Americans became a common occurrence.  This brings us to June 25, 1876, and completes the journey to the end.  Certainly hostilities with Native Americans continued for another year; however, the two-year interval between Custer’s arrival in the Black Hills in summer 1874 and his demise in summer 1876 was the journey to the end.

What about the gold near Custer City?  Did it ever produce in “paying amounts”? Gold mining in the Custer area was never really very successful although many cubic yards of soil and gravel were turned over and panned or sluiced for the metal.  Placer gold is never as lucrative as lode gold and miners never really found the source of the flakes and small nuggets retrieved from the Custer area.  Most likely the source is “upstream” somewhere near Rochford, perhaps waiting for discovery.  Or perhaps the lode rock was eroded away!
Flakes of gold can be panned, with hard work, from many streams in the Black Hills.  And, one runs into claim markers at numerous localities.  However, none of the placer deposits seem more than recreational opportunities, but—hope springs eternal.
As for my panning attempts, I have a grand total of two flakes from French Creek.  However, I nether dug down to bedrock nor worked very hard! I just wanted to see if the early miners left a small tidbit for an ole geologist.