Memories, pressed between the pages of my mind
Memories, sweetened thru the ages just like wine
Elvis
As many/most readers know, I have a very soft spot in my heart for the State of South Dakota.  I suppose that comes from my attendance, in the mid-1960s, at the University of South Dakota.  During those two years of completing a graduate degree, I became fascinated with the diversity of the state’s geology from the glaciated eastern half to the Missouri River Trench to the “badlands” of the west and finally to the mountains of the Black Hills.  In “those olden days” collecting minerals from outcrops and mine dumps was fairly easy as the land was open or land owners were very accommodating to student collectors.  Today much has changed as land owners are increasingly frightened by liability lawsuits, and unscrupulous collectors (I use that term loosely) have ruined landscapes, left open pits, and swiped vertebrate fossils.  Field collecting is getting difficult.

As usual, my early fall trip to the Black Hills of South Dakota included a couple of jaunts to the agate beds---locations where collecting is still possible.  There are several postings on this Blog that emphasize the geology of the beds so I will not repeat that information here.  I essentially want to post a few photos to emphasize that the agates are still out there, both in the source beds at Teepee Canyon, and out on the plains where rocks were transported by ancient streams.  Collecting the former requires some large crack hammers, arm strength, gloves and eye protection while collecting on the plains emphasizes “lots of” walking away from the main roads.

Teepee Canyon is located approximately18 miles west of Custer, South Dakota, about 2 miles west of Jewel Cave National Monument off U. S. 16.  As soon as travelers leave the Monument they should look to the west, up slope, to spot piles of broken rocks.  Sawmill Spring Road, (FS 456) leads off to the west and about a mile further West Teepee Canyon road takes off.  My best advice is to follow one of these roads/tracks and look for quarries where past prospectors have tried their luck.  The land is managed by the U.S. Forest Service and there are mining claims---I think.  It is best if rockhounds stop in the USFS office in Custer and discuss your plans with one of the friendly employees.

The agates are encased in chert nodules housed within the lower Minnelusa Formation (Paleozoic: Pennsylvanian).  I suppose these nodules are the result of silica-rich meteoric waters circulating through the unit with resulting diagenesis producing the chert.  Why some nodules are agatized—I don’t have the slightest idea.  Just as I am uncertain how/why agates really form!  The formation of agates in several types of rocks is extremely complicated, even for the “experts”.


Fairburn agates are perhaps the “most famous” agates found in the Great Plains and are valued for their colorful fortification patterns with an abundance of reds (iron oxide), oranges (iron oxide) and blacks (manganese oxides).  There are several localities where agate hunters have collected a variety of stones but the easiest spot for collectors to locate is the “original Fairburn Beds” near the small community of Fairburn, located south along I-90, ~25 miles, of Rapid City near SD 79.  After reaching the community of Fairburn, agate hunters should travel east along French Creek Road (good gravel road) for about 12 miles to a sign locating the original collecting area managed by the Buffalo Gap National Grasslands.  Although known to collectors for decades, these Fairburn beds still yield an occasional agate, and as many colorful specimens of jasper, quartz and chalcedony as can be carried out in your collecting bag.  There are also occasional pieces of petrified wood, and brachiopods replaced by silica.

The really interesting story about the Fairburns involves their relationship with the Teepee Canyon Agates described above.  Most geologists now believe that the Minnelusa Formation in the Black Hills is the source of the Fairburn Agates and the siliceous pebbles were transported out to the plains by Tertiary streams draining the Hills.  The agates may be found within conglomerate beds of the Chamberlain Pass Formation and overlying Chadron Formation (both are Eocene in age and part of the White River group). Perhaps agates are most easily observed in the lag gravels covering many outcrops where the finer sediments have eroded away from the Eocene formations leaving behind a veneer of pebbles.

At any rate, 2016 was again a successful season of locating a few agates, and that was all I asked.  Just hobbling around in the agate fields brought back a flood of pleasant memories from 50 years ago. See below. 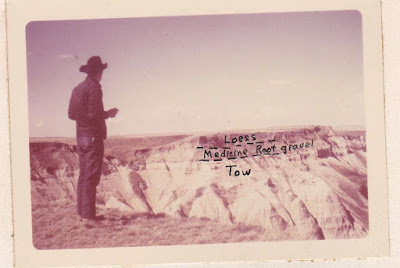 I love those random memories that make me smile no matter what is going on in my life right now.  Unknown

I would suggest that if you are interested in Fairburn Agates---pick up a book or three written by Roger Clark, the premier expert on the agates.  Book one, South Dakota's Fairburn Agate, is only available on the used book circuit.  Book number two, Fairburn Agate: Gem of South Dakota, and number three,  Fairburn Agate: South Dakota State Gemstone are in print and published by Silverwind Agates.
Posted by Mike at 7:14 PM 2 comments: