Greatness does not lie in the fabrics of your words but in the strength of your impact (Ikechukwu Izuakor)
Lazard Cahn was inducted into the Micromounters’ Hall of Fame in 1982.

Soon after I arrived in Colorado Springs in 2006 I joined the Colorado Springs Mineralogical Society (CSMS) and started to further explore the geology and history of Colorado.  At that time the Society’s publications always contained the phrase “Lazard Cahn, Honorary President.”  Of course I did not have the slightest idea about the career of Mr. Cahn.  Someone pointed me to Ray Berry, the unofficial historian of the Society, and with a subsequent visit, I learned much.  Later in life I was able to obtain a small booklet, History of the Colorado Springs Mineralogical Society, edited by Mr. Berry (2002) and much of the historical information in this posting comes from that source (and is not in quotes in this article).

CSMS can trace its origin to November 1936 when 13 individuals (including two females) met for the purpose of organizing a local mineralogical society.  Lazard Cahn was elected as the Permanent Honorary President; hence, the designation of such on all CSMS publications into the 21st century.  I note with interest that at the initial meeting the new members spent their time examining micromounts under binocular microscopes.  Evidently the new society was the outgrowth of interest by persons studying microscopic crystals under the instruction of Mr. Kahn (twice per week at his office).  The Society was active early on and by 1939 mineral displays were exhibited in Colorado Springs through the Chamber of Commerce.

At the time of the Society’s organization Cahn was a well-known mineralogist with a world-wide reputation.  He was born in New York (1865) to parents who could afford sending Lazard to school in Stuggart, Germany (1880).  In 1885 he returned to the U.S. and moved, with his sister, to Colorado Springs where he remained till his death in 1940.  His interest in chemistry initiated a study of minerals collected in the igneous rocks of the Pikes Peak granite exposed around St. Peter’s Dome.  His monetary inheritance also allowed him to study mineralogy at various American universities, and in Heidelberg, Germany, under the famous crystallographer Victor Goldschmidt. It was sometime during this time period (early 1890s) that he became a “full-time” mineral collector and begin to “deal” in minerals. In 1895 Cahn had an advertisement in The Mineral Collector wanting to buy or exchange for “very choice, well crystallized American minerals” and noted his sale of several Colorado specimens (Wilson, 2015).  He became friends with Charles Palache at Harvard University and studied crystal drawing at the University in 1914-15.  Cahn continued through the years, from offices in both Colorado Springs and New York City, to study, collect, exchange and sell minerals, especially micromounts.

Palache noted in his memorial to Cahn (reprinted in the Berry booklet) that in 1937 the Colorado Springs mineralogist had, in his collection, over 3700 micromounts (many more by the time of his death; Wilson, 2015) representing 685 species!  After his death Yale University received the bulk of his micromounts, his larger specimens were sold as part of estate liquidation, and smaller micromount collections went to Harvard University, the Paris School of Mines, Colorado School of Mines and Northwestern University (2400 specimens later dispersed to the public).

I remain uncertain if any/many of Cahn’s specimens remain in Colorado Springs or even in Colorado.  Perhaps a reader could offer me some information.  I do know that a collection of micromounts belonging to Willet R. Willis III was donated to the Air Force Academy after his death in 1968. Mr. Willis was one of the original charter members of the CSMS and evidently acquired at least one micromount from Cahn.  In 2013 the Denver Museum of Nature and Science acquired the Willis collection from the Air Force Academy and Lieberman and Hagadorn (2013) noted “by far the most spectacular specimen in the [Willis] collection is a piece of gold from Offenbanya, Translvania (Romania).  Collected by Cahn, it consists of gold wire adorned with different crystalline forms of gold, including ultrarare cube-shaped crystals of gold.  Each bears step-sided indentations on its crystal faces.”

After other inquiry visits with Ray Berry, I was told to examine Cahn’s grave in Evergreen Cemetery since the marker stone was an enlarged replica of a twinned cahnite crystal.  It was then I learned that Palache, in 1927, honored his friend by naming a very rare borate arsenate:  cahnite {Ca2[B(OH)4](AsO4)}.

Cahnite is an extremely rare mineral and first found by Cahn at Franklin, Sussex County, New Jersey, named in 1921 by Palache (but not described until later—1927).  Evidently Cahn was more interested in teaching students and collecting minerals than publishing descriptions—he only published one paper during his lifetime.  Cahnite now has been identified at several other localities but remains quite rare.

Unless crystals are present, cahnite is a rather non-descript colorless to white to gray mass that is brittle and soft (3 Mohs).  It has sort of a sub-vitreous to greasy luster and a white streak (if such can be obtained).  It would be almost impossible for me to identify these very tiny masses unless someone told me that XRD or a microprobe identified them as such.
Crystals are usually colorless to white but there are pale green-brown varieties. The crystals belong to the Tetragonal System and are often pseudo-tetrahedral in habit but most of the time are twinned and etched and appear in a cruciform shape (MinDat).

At the type locality at Franklin, cahnite was found associated with a metamorphosed zinc orebody.  However, it is now been found in other geological settings such as pegmatites, vugs in basalt associated with zeolites and in boron deposits.  Wherever cahnite is located it is a late stage mineral in association with boron. 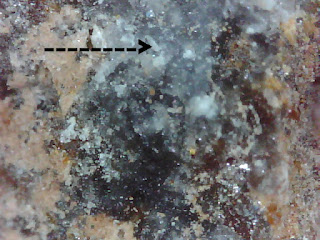 For the last several years I have been searching for a specimen of cahnite simply due to Cahn’s association with CSMS.  Most specimens offered “for sale” are of tiny crystals and are far out of my price range.  However, a couple of weeks ago I was able to purchase a small (pea size) specimen with tiny masses of cahnite collected from the Solongo Basin in Russia.  I could find out very little about the Basin except that it contains borate minerals that are associated with boron-enriched skarn deposits related to intrusives and limestones (Kistler and Cahit, no date).  The limestone would have provided the calcium while other primary borate minerals were the source of the boron.  I don’t have the slightest idea about the source of the arsenic but presume it is also secondary.  Whatever, I now have a mineral named after perhaps the most famous mineralogist to call Colorado Springs “home” and the Permanent Honorary President of the Colorado Springs Mineralogical Society.

The words inscribed on the marker stone of Lazard Cahn perhaps best describe this true gentleman---Scientist, Teacher, Friend.  We could all hope for such a dedication at our passing.

I found this little tidbit of information stuck away in the October 1, 2005 History Hounds of the Colorado Springs Gazette (written by Paul Asay).  It adds a bit of “spice” to the geology aspect of this offering! Rose Lorig, who said she is “90 plus-plus-plus” years old, doesn’t have a history degree or a roster of scholarly works to her credit. But few know more about Colorado Springs’ early Jewish community than she does. She knows that a man named Lazard Cahn traveled from Colorado Springs to New York City in 1893 to break up an affair between his sister and a Belgian duke — and that his sister nearly killed him… Isaac Cahn was the first Jew on record to move here, Lorig wrote, moving to what is now Old Colorado City from Rhemes, France, in 1860. He owned land north of Colorado Avenue, called the “Cahn Addition” on old maps. It was Cahn’s son, Lazard, who went to New York and was promptly stabbed and then — when recuperating at his sister’s house — poisoned. Lorig has no record of why Isaac Cahn moved here.
Another tidbit from The Canadian Mineralogist, 1989, v. 27 : In 1978 one of the authors (W.W.P.) purchased a portion of the Lazard Cahn mineral collection…One of the newly acquired specimens was labeled ''magnolite with coloradoite, Keystone mine, Magnolia mining district, Colorado". A megascopic examination revealed some white fibers consistent with the physical description for magnolite… Approximately five to six magnolite-bearing specimens are known to exist in North American mineral collections.

Evidently Cahn did collect a few larger specimens since a 1926 American Museum Novitates (No. 207) noted a specimen in the Meteorite Collection: At an unknown date, a large iron meteorite, weighing 140.7 kilograms, was found near Ysleta, El Paso County, Texas. Mr. Arthur Curtiss James obtained it from Mr. Lazard Cahn and gave it to the Museum.