The Mineral and Fossil Marketplace, with minerals featured in the last article, also has vendors with a nice displays of fossils.  Imagine my surprise when I walked into Sahara Overland, expecting lots of fossils from Africa, and was greeted by a nice mosasaur collected from the Smoky Hill Chalk in western Kansas!  Platycarpus, a large swimming marine lizard,    is limited to rocks of the Late Cretaceous and lived ~ 84-81 Ma. and its fossils are extremely abundant (for large vertebrates) in western Kansas.  There is much information about mosasaurs and other Cretaceous fossils on the web site www.oceansofKansas.com, plus the second edition (2017) of a book by the same name. 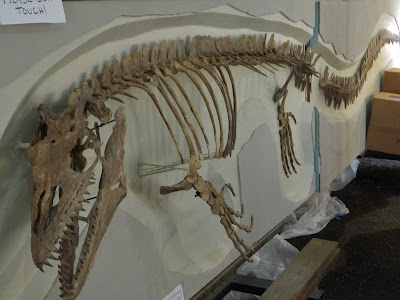 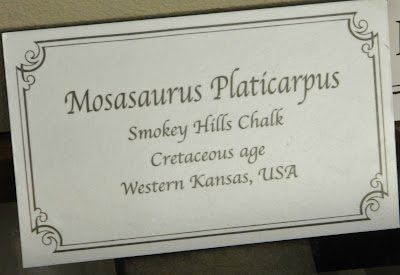 Upon entering another large room, I was able to observe additional fossils that I wanted to take home; however, my office certainly could not accommodate such large specimens! 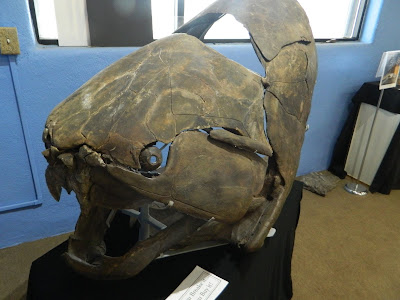 Dunkleosteus was a large swimming animal (commonly called fish in a generic term) termed a placoderm (plate + skin = armored) that certainly was the top predator in Late Devonian marine waters.  They were up to 20 feet in length and had bony chomping jaws (termed a tooth plate) rather than teeth (like most modern “fish”) and two bony “fangs” protruding from the top of the upper jaw.  Their head was covered by bony plates that articulated with plates covering the remainder of the body. They did not have a bony internal skeleton.  They were true superpredators living around the time period of 358-382 Ma but did not survive extinctions at the end of the Devonian. 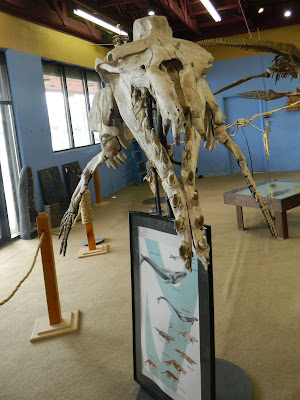 Basilosaurus was a toothed whale that lived in the later part of the Eocene Epoch ~40-35 Ma.  Specimens recovered indicate some of these animals reached 60 feet in length.  That is one big predator.  When first described by paleontologists Basilosaurus was thought to be a large reptile and acquired a moniker meaning King Lizard.  Later paleontologists noted mammalian traits of the beast such as two-rooted molars.  Basilosaurus may have a lineage showing descent from land mammals since a rudimentary set of hind limbs are present.  Both Mississippi and Alabama have deemed Basilosaurus as a notable animal and named them as their State Fossils. 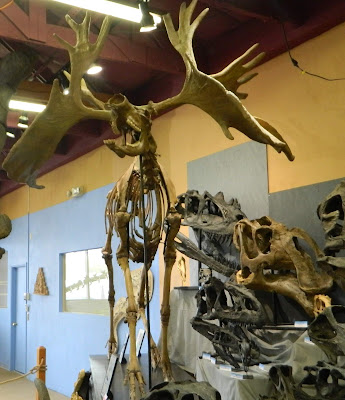 Cervalces was is a type of extinct deer commonly known stag-moose or elk-moose.  Arriving from Eurasia they inhabited North America during the later Pleistocene Epoch (the Ice Age, last couple of million years) and probably lived in wetlands south of receding glaciers. Most fossil bones are found in the Midwest part of the U.S.  They did not survive the late Pleistocene extinction and seemed to be ecologically replaced by our modern moose (Alces alces). 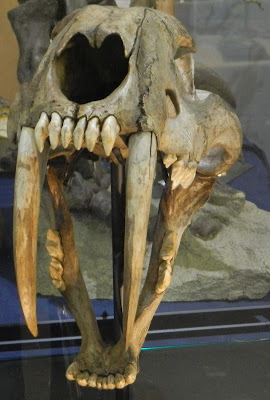 A large cat known as the saber-toothed tiger is one of the most famous “prehistoric animals” (ranking up there with T. rex) and every child’s idea of the villain animal chasing down baby mammoths and frightening small cats and dogs as it gobbles down its prey. It (Smilodon sp.) is not a true cat (as is a modern lion) nor related to tigers nor was the first “saber-tooth cat.”  However, it does belong to the cat family, the Felidae, lived in the Pleistocene, and became extinct at the end of that Epoch. Smilodon is the State Fossil of California due to the many specimens found at the Rancho La Brea tar pits in Los Angeles. 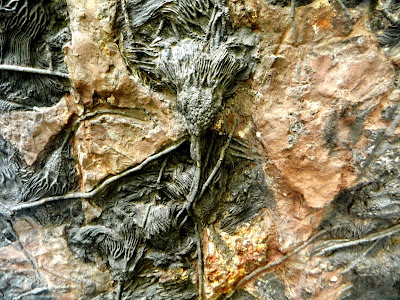 Crinoids are members of the Phylum Echinodermata (spiny skin), related to animals like starfish, and are rather uncommon in modern oceans.  However, in shallow waters of the Paleozoic Era crinoids were one of the most common animals.  Early paleontologists thought they were plants that grew attached to the sea floor by a stem.  In reality, they filter out microorganisms and are animals. Only a few groups survived the great End of Paleozoic extinction event.

So, that was my foray into paleontology that finished my first day exploring Tucson.  Lots more to see.
Posted by Mike at 6:42 PM No comments: