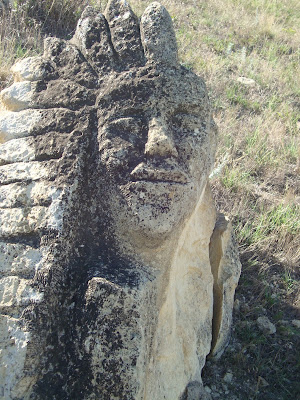 I like to roam around the countryside looking for interesting rock outcrops, blooming flowers, nicely shaped trees, and singing birds.  I have always been interested in nature and in these later years of my life thoroughly enjoy just "being alive".  As I am fond of telling my friends, life is good.

So, in areas that I am quite familiar with (geologically speaking), it takes much to really surprise me.  Like, "holy cow, what in the world is that" sort of surprise?  A real serendipitous moment!  Well, it happened the other day during my little trip to western Kansas.  I was on a country road that I had traveled tens of times before, always looking out the window at the rocks when it popped up, there it was---"what was it"?  Am I seeing things (and no I did not have any of that funny weed that Colorado has legalized)?  It looks like a "statue" of some sort out in the pasture. I parked my pickup, crossed the fence (without snagging my pants on the barbed wire [known in the west as bob wire]), and trudged up to the "statue".  Much to my amazement there was a large hunk of Fort Hays Limestone (Cretaceous, member of the Niobrara Formation) that a stone mason had skillfully worked into a Native American "head" complete with an eagle feather bonnet.  It seemed to have been in place at least a few decades since the characteristic black patina of the Fort Hays had formed.  I didn't have the slightest idea what this old gentleman was doing out in the pasture.  It was on a slope of Blue Hill Shale where it had tumbled down from the outcrop above (before the carving), and I did not notice any nearby structures where an early rancher may have lived.  So, I decided to ask my brother, who lives reasonably close to the pasture, about the gentleman.   Since he is the smarter one of the family I thought for certain that he would know the answer, or at least make one up.  Although brother had seen the structure, explanations were not forthcoming---he didn't have the slightest idea about the origins of the gentlemen.  Well sort of did not have any ideas---he did spout something about Vikings and Rune Stones (we are of Danish hertitage so Vikings have always been our heroes).

I guess the old gentlemen in the pasture will remain a mystery to me, at least for now.  And that is OK for life always needs a few mysteries for without mysteries life would be very dull indeed.  What would be left to strive for if everything were known? (Charles de Lint)

During my somewhat lengthy stay in western Kansas, about a third of my life, I became sort of fascinated by some of the large concretions located in the Cretaceous rocks.  Perhaps the best known are the giant (25+ feet in diameter) sandstone concretions weathered from the Dakota Formation in Ottawa and Ellsworth counties in central Kansas (saving these for another story).  The Blue Hill Shale Member of the Carlile Formation has fairly large rounded to warty concretions with calcite crystals.  Some members of the Greenhorn Limestone contain abundant limestone concretions, often fossiliferous and commonly flattened or oval in shape.  In the far western part of the state, Wallace County, some concretions in the Pierre Shale contain crystals of barite and occasionally fossil cephalopods.

The Cretaceous rocks in central and western Kansas are often thought of as four or five different informal groups (although it is more complicated than this simple classification): 1) the Cheyenne sandstone (non-marine) and Kiowa Formation (mostly marine); 2) the Dakota Sandstone (both marine and non-marine); 3) the marine Graneros Shale, Greenhorn Limestone and Carlile Shale; 4) the marine “chalk” (Niobrara Formation); and 5) the marine Pierre Shale.  These stratigraphic units are the “heart” of the great Cretaceous Western Interior Seaway.

The Carlile Shale, and its stratigraphic equivalents (for example the Benton Group or Formation) is a widespread unit extending from Utah to eastern Iowa/Minnesota and Texas north into the plains of Canada.  In Kansas, the Carlile is divided into three members: 1) the lower Fairport Chalk lying conformably above, and often indistinguishable from, the Pfeifer Member of the Greenhorn Limestone; 2) the Blue Hill Shale, a rather fissile, dark gray shale, often with small pyrite concretions and limonitic staining (probably derived from weathering of the pyrite); gypsum in the form of selenite is common and often litters exposures.  In most areas the Blue Hill is a slope former and poorly exposed--being covered with vegetation.  Where exposures do occur the unit is easy to identify and “spot”; and 3) the seemingly gradational (in most places) Codell Sandstone.  The Codell is a “strange one” as in some places it is a true sandstone, but a silty one, quite distinguishable from the Blue Hill while at other localities the unit is a sandy shale seemingly gradational with the upper Blue Hill. Many geologists are interested in the Codell due to the presence of numerous abraded teeth, dermal denticles, fecal pellets, and bones (fish and sharks).

In almost all localities the Codell is unconformably overlain, and has a sharp contact with, the Fort Hays Limestone Member of the Niobrara Formation.  In fact, a common profile one observes in central and western Kansas in the cliff-forming Fort Hays Limestone protecting a steep-sloped Codell overlying a slope-forming Blue Hill Shale.

Perhaps the most interesting “thing” about the Blue Hill is the presence of thousands of concretions. Some are quite large (commonly on the order of four feet or so, some are at least 10-12 feet in diameter).  Hattin (1962) noted three different types of Blue Hill concretions: 1) calcareous septarians, the most abundant and interesting; 2) noncalcareous clay-ironstone; and 3) the rare sandstone.  The common septarians are what Kansans locals call “thundereggs”.  They seem everywhere the Blue Hill is exposed and farmers and ranchers commonly collect them as yard ornaments or to line driveways.  I suspect “city folk” would do likewise; however, front end loaders are uncommon implements in city garages.
When I was teaching in Kansas, people often came up to my office lugging along their “fossil turtles”.  It was my duty to bust their balloon and inform them their rock was a septarian concretion.  I tried to encourage them to closely examine the concretion and notice that the internal cracks in the concretions are secondarily filled with calcite. However, I was only successful about 50% of the time and on more than one occasion the visitor huffed out of my office with his/her fossil turtle.

The septarians, at sometime in their life, begin to shrink and fractures form where secondary calcite then precipitates, usually as larger, dark-colored crystals.  The characteristic septarian ridges form when the softer limestone between the veins weathers more rapidly than the secondary crystals.

It is interesting, as least to me, that another secondary calcite, in the form of tan-colored tiny crystals, commonly fills vugs and voids in the concretions.

There are many "things" about septarian concretions that I do not fully understand.  However, I do not believe that I am alone in my confusion!  At least the professional literature would indicate such.

If readers are interested in collecting septarians I suggest consulting a geologic map of Kansas to pinpoint outcrops of the Blue Hill, especially around Cedar Bluff Reservoir and the Smoky Hill River south of I-70 (Exit 135, Gove County).  Other localities include the Blue Hills physiographic region, especially in Mitchell County, and the breaks along the Saline River in northern Ellis and Russell Counties.

But be aware, most exposures of the Blue Hill Shale are on private land. However, I have found western Kansas farmers and ranchers quite friendly and open to collecting concretions if visitors ask permission and close gates (or even walk to outcrops from the road).
On a recent road trip to western Kansas I visited the Gatorosa Ranch along the Smoky Hill River (see blog posting 6-4-2011) where the Blue Hill is widely exposed and concretions are numerous.  So, I nabbed my camera and snapped the photos below. 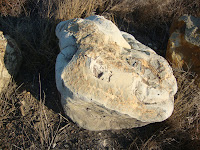 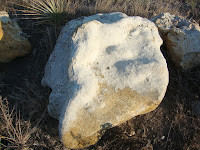 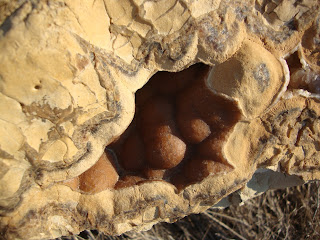