One of the “things” that I enjoy about Shannon Minerals is the great variety of rare or uncommon minerals in his stock.  So, how could I pass up a specimen of laffittite?  My initial reaction to seeing the box of specimens was---what is it?  The red and orange colors observed through the perky case certainly were attractive!  Then I read the label and noted the specimen also contained realgar [the red As4S4] and orpiment [the orange As2S3], both arsenic sulfides.  The specimen came from the Getchell Mine in Nevada, one of the more famous U.S. localities for colorful arsenic minerals.  The mine at Getchell is a Carlin-type, or sediment-hosted, replacement deposit.  The mineralization is associated with a fault zone along a Cretaceous igneous stock where hydrothermal fluids were able to deposit tiny (micron gold) flakes, or dissolved gold, into pyrite associated with Cambrian and Ordovician rocks.  The Carlin-type gold deposits in Nevada are the largest gold producing mines in the U.S.; however, since the gold is essentially invisible, the deposits are tough to locate.   The realgar and orpiment at Getchell were deposited by late stage hydrothermal solutions.

What about the laffittite in the specimen?  If not for an XRD analysis of some tiny crystals, I would have missed identifying the mineral in the sample.  Even with this specified identification listed on the sample box, I am still sort of guessing! 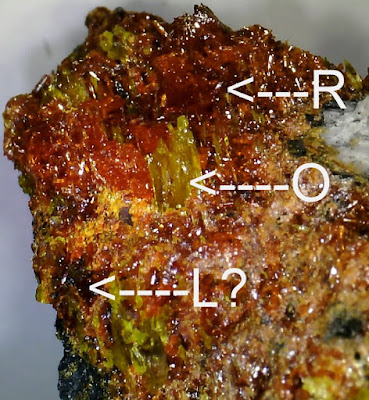 Laffittite [AgHgAsS3] is a silver mercury arsenic sulfide associated with other late stage hydrothermal arsenic minerals like realgar and orpiment.  The Getchell Mine produces short prismatic crystals of laffittite (at other localities pseudo cubic and tabular) that are very dark red (almost appearing black) and opaque.  They have a metallic luster and a listed hardness of ~3.5 (Mohs).  Getchell crystals are often submillimeter in length. My camera is not refined enough to pick up other details of the crystals.
Arsenic minerals are often quite colorful and make good display specimens – maybe!  Exposure to bright light will alter realgar to pararealgar, and it will also decay to orpiment.  In addition, both minerals are toxic, so hand washing is a necessity.