The San Juan Mountains are known to most geologists as a volcanic terrane since there is a tremendous amount of evidence pointing to numerous volcanic eruptions in the Tertiary (last 66 million years or so). The San Juan’s are also home to perhaps 60 volcanic calderas, usually circular or oblong collapse features indicating ancient volcanoes that “blew their stack”.  The largest of these features is known as the La Garita Caldera, a truly gigantic structure.  Ort (1997) estimates the caldera was approximately 22 X 45 miles in size and produced about 5000 cubic-miles of volcanic material.  The pyroclastic ejecta generally are referred to the Fish Canyon Tuff (a silica-rich quartz latite containing about 40 per cent phenocrysts) that was scattered over a wide area with wind-blown ash perhaps reaching the east coast of the U. S.  There is a radiometric date of 27.8 Ma (Tertiary: Oligocene) on the rock unit (Ort, 1997).
The eruption of the La Garita Caldera is related to the Mid-Tertiary Ignimbrite Flare-Up, a period of very explosive volcanism centered in Nevada, Utah and Colorado approximately 25-40 Ma (Cannon, 2002).  In fact, the San Juan Mountains are the result of several of these volcanic explosions producing both lava rock (basalt) and pyroclastic rocks like ash and tuff. 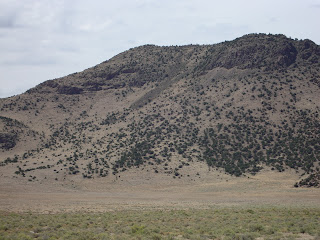 FISH CANYON TUFF, SAGUACHE COUNTY, COLORADO.
Since the initial blowout of the Fish Canyon Tuff, Carter (2009) has described seven additional eruptions seemly clustered near the center of the La Garita Caldera.  One of these eruptions created the Bachelor Caldera and spewed out the 190 cubic-mile Carpenter Ridge Tuff.  About 27 Ma an explosion created the San Luis Caldera and ejected the 135 cubic-mile Nelson Mountain Tuff.  At 26 Ma the same volcano created the Creede Caldera that expelled the 120 cubic-mile Snowshoe Mountain Tuff.
The Crystal Hill Mining District is located a few miles north and west of the community of La Garita near Carnero Creek.  The District was founded in 1881 by prospector and mining man Mark Biedell.  Crystal Hill produced native gold and silver from a collapse breccia structure for a few years before mining operations ceased, mostly by 1900.  Two small, short-lived mining camps sprang up in the area. The first, Biedell, appeared in 1881 and 1000 men were mining by 1883; the second sprang up in 1886 and was known as El Carnero (GeoZone, 2011).  The latter area was producing from “lead carbonate” (BLM information sign), a mineral I presume is cerussite (PbCO3).  Eckel (1997) did not mention cerussite at Crystal Hill but did note its occurrence at the Bonanza District about 30 miles away: “…cerussite followed angelesite and covellite as shells on massive galena.”


In the 1940’s mining evidently returned to Crystal Hill in the form of the Crystal Hill Mining Company (BLM information sign); however, I was unable to locate additional information about this later activity.
Voynick (1994) noted that “exploration geologists returned to Crystal Hill in the late 1970’s, delineating a large, low-grade zone of disseminated gold near the top of the hill.  The Crystal Hill Mining Company developed an open-cut heap leach mine recovering 30,000 troy ounces of gold in four years”.  In 2009?  U. S. government “stimulus funding” allowed the BLM to reclaim, at least partially, the old mine.  BLM now allows access on the reclaimed area but warns that the main pit is off limits and is situated on private land. 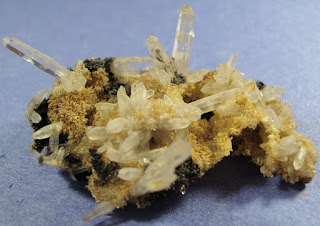 SLENDER TERMINATED QUARTZ CRYSTALS FROM THE CRYSTAL HILL MINE. WIDTH ~ 4.2 CM.
The Crystal Hill Mine is best known for producing terminated quartz and amethyst crystals and I wrote about these specimens in a posting on November 19, 2011.  However, another interesting specimen mineral coming from Crystal Hill is aragonite/calcite.  Voynick (1994) described the crystallization process as: “The last solution [a high-silica solution] which leached downward from the surface carried calcium carbonate from dissolved limestone.  The silica crystallized as drusy quartz and, in vugs, as well developed crystals of clear, smoky, and amethyst quartz crystals…  The dissolved limestone recrystallized as white needles of drusy calcite.” 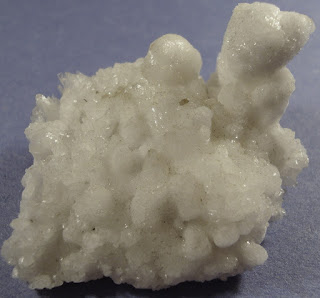 CALCITE CRYSTALS OVERLAIN BY GLOBULAR ARAGONITE. WIDTH ~ 5 CM.
My Crystal Hill specimen has scalenohedron calcite crystals overlain by rounded aragonite and is quite impressive.  John Betts (John Betts Fine Minerals) states that the aragonite fluoresces green and the calcite fluoresces blue-white under UV illumination.  However, I have neither a short-wave nor long-wave lamp to check this statement.


Eckel, E. B., and others, 1997, Minerals of Colorado: Golden, Fulcrum Publishing.
GeoZone, 2011, The Lost Mine of Saguache Creek:
www.thegeozone.com/treasure/colorado/tales/co014b.jsp#prospecting