Back in the 1980’s I was enjoying the geology of western Utah, looking at the rocks, and tracking down rumors of fossils.  In fact, I did find a nice locality of Miocene vertebrates just across the state line in Nevada and described these (Roglove Fauna) in a professional publication.   The fossiliferous  beds were located south of Wendover, Nevada/Utah—the town is located along I-80 in both states with the casinos in Nevada--- and then west of Ibapah, Utah, on roads and trails.  During the excavation of these fossils my crew always liked to explore the countryside and who could resist a town by the name of Gold Hill?  In fact, Gold Hill became even more exciting when we learned it really was a ghost town!  There are a few human occupants left but also a number of old mines and abandoned buildings.  It seems as if travelers heading west to California discovered the precious metal ~1858 and “Gold District Clifton” was established in ~1869.  Gold Hill continued to grow and became a “town” in ~1892 when a stamp mill was constructed.


The information sign at Gold Hill notes that the usual gold, silver, copper and lead were initially mined but when those minerals became depleted, the boom was over and the town became a ghost.  During World War I, arsenic was in demand as insect control for creatures devastating the cotton fields of the southern U.S.  So, Gold Hill opened up again and mined arsenates such as adamite [zinc arsenate hydroxide, Zn2 (AsO4)(OH)], austinite [calcium zinc arsenate hydroxide, CaZn(AsO4)(OH)] and conichalcite [copper calcium arsenate hydroxide, CaCu(AsO4)(OH)].  After the war, the need for Gold Hill arsenic waned as foreign sources offered less expensive material (sound familiar) and the boom was over. But, in World War II the U. S. had a need for tungsten to help harden the massive amounts of steel needed for the war effort.   So, mining begin for ores such as wolframite [iron manganese tungstate, (Fe,Mn)WO4], scheelite [calcium tungstate, CaWO4], ferberite [FeWO4] and hübnerite [MnWO4].  Again, after the war, the “need” for tungsten became less as other sources emerged.  Today, most of the action in the Gold Hill area is exploration for its namesake—gold.  And, for mineral collectors since nearly 70 amazing species have been identified from the mines (http://www.rocks4u.com).

Gold Hill is located along the west side of the Deep Creek Mountains where peaks reach 12,000 feet—Ibapah Peak at 12,087 and Haystack at 12,020.  They are major topographic features in western Utah.  The range has a Precambrian core surrounded by Paleozoic sedimentary rocks intruded by Tertiary intrusions—mostly quartz monzonite and granite.  The mineralization at Gold Hill is associated with the intrusions.


A beautiful mineral collected from Gold Hill is conichalcite, a bright green, often botryoidal, copper arsenate that usually appears as an encrustation.  Of course, the green color is due to copper and the mineral usually occurs in the oxidation zone, as an alteration production.   As I understand it, and that may be a big stretch, conichalcite (copper arsenate) is in solid solution with austinate (zinc arsenate) and duftite (lead arsenate), with cobaltaustinate (cobalt arsenate), and with tangeite, AKA calciovolborthite (copper vanadate).  All that I really know is that conichalcite is a “pretty” mineral that I hope to recollect at Gold Hill! 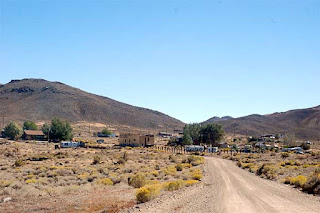