One of my favorite highways is U. S. 287 heading north out of Ft. Collins, Colorado, toward Laramie, Wyoming, and passing through some very interesting geology.  Most of the early going is in a variety of marine Cretaceous formations deposited in the great Western Interior Seaway.  Near Teds Place the highway breeches the Dakota Hogback, a well-know feature along the Front Range, and moves to older rocks. About 17 miles north of Ft. Collins the Permian Lykins Formation (and others) crops out exposing extensive beds of gypsum.  Rocks of the Lykins represent deposition in the final stages of the end-of-Paleozoic seaway, including evaporitic rocks such as gypsum.
The Owl Canyon Road (Larimer Co 72 running east) cuts through the Lykins and rockhounds will be able to examine road cuts and collect alabaster, satin spar and selenite.  The alabaster is of high quality and has been used by “rock carvers” since the late 1800’s.  Today, a company called Colorado Alabaster Company in Fort Collins markets the raw rock on a world-wide basis. 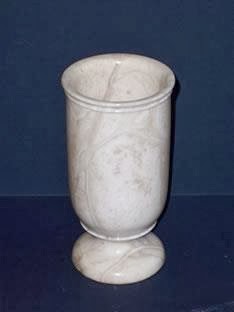 Colorado Alabaster Company (courtesy photos) quarries stone from north of Fort Collins and markets the raw material (quarry to right) to a variety of artists (lathe-turned urn to left) and schools (for art projects).

One of the more interesting crystals available among the alabaster outcrops are the misnamed “Indian Dollars.”  Aragonite and calcite have the same chemical composition [CaCo3]; however, calcite forms in the Hexagonal crystal system and aragonite is Orthorhombic---so they are polymorphous minerals.  Most aragonite crystals are acicular, maybe chisel-like, in shape.  But, the hexagonal “Indian Dollars” commonly sold as aragonite are another story!  Actually these “Dollars” are twinned crystals (three individuals) that form trillings that look like hexagonal crystals.  The kicker is that calcite has replaced the original aragonite in the “Dollars.”
After leaving the Owl Canyon Road, U. S. 287 traverses the Permian-Pennsylvanian Fountain Formation until reaching the small community of Livermore.  The road then cuts through an unnamed anticline (older Permian Owl Canyon and Ingleside formations exposed) before picking up the Fountain again about two miles from Livermore.  The Fountain is a hodgepodge of arkosic (rich in feldspar) sandstone and conglomerate, and reddish-brown siltstone and shale shed off the rising Ancestral Rocky Mountains to the immediate west.

The big change in geology happens in another mile and one-half where the highway crosses the North Livermore Fault!  Travelers can easily notice the change from the Fountain arkose to the Precambrian (1.7 Ga event) gneiss and schist.  This is a great place to observe a fault contact of major proportions (for a map see Braddock, W.A. and Connor, J.J., 1988).

Approximately 10 miles north of Livermore, on the east side of the road, is a local landmark called Steamboat Rock.  The entire structure is due to erosion of the Fountain Formation (I think) although the area is mapped as Ingleside Formation-Fountain Formation (Braddock, W.A. and Cole, J.C., 1978).
The road continues on to Laramie and the stretch in Colorado, shortly after Steamboat Rock, traverses through the Precambrian Sherman Granite (~1.4 Ga).  This unit was intruded into the older ~1.7 Ga metamorphic schists and gneisses. A really interesting geological feature called the Virginia Dale Ring Complex is exposed near the community with the same name (about four miles south of the state line).  The complex is circular and approximately nine miles in diameter, and inserted into the base rock Sherman Granite.  The “rings” are composed of granite and quartz monzonite (intrusive igneous rocks rich in the feldspar, plagioclase).  Some early geologists thought the complex was some sort of an impact structure; however, geologists now believe the ring rocks were emplaced into older ring fractures (Eggler, 1968).
For a history buff like me, Virginia Dale is also known as a stage stop (1862-67) on the Overland Trail Stage Line.  The first station agent was sort of a “desperado” by the name of Jack Slade (who ended up at the end of a hanging rope in Virginia City, Montana, in 1864). The Colorado city of Julesburg was named after Jules Beni whom Slade shot and killed in 1860. And, in his novel Roughing It, the famous writer Mark Twain described Slade.  There was such magic in that name, SLADE! Day or night, now, I stood always ready to drop any subject in hand, to listen to something new about Slade and his ghastly exploits.  Even before we got to Overland City, we had begun to hear about Slade and his "division" (for he was a "division-agent") on the Overland; and from the hour we had left Overland City we had heard drivers and conductors talk about only three things -- "Californy," the Nevada silver mines, and this desperado Slade.