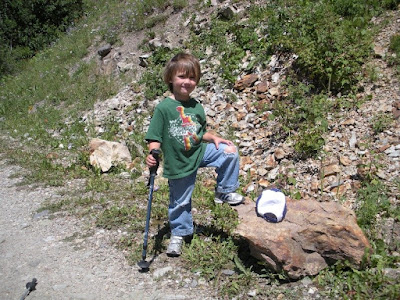 Back in the mid-1960s I was completing field work for my MS thesis in the badlands east of the Black Hills.  I certainly was not much of an igneous/metamorphic mineralogist/petrologist (AKA hardrocker) and often needed identification help with numerous specimens found in the Pleistocene stream sediments. So, off I went into South Dakota Tech looking for anyone who would indulge my numerous questions and help a poor ole grad student. One day a person said something like “go find Bill Roberts” and so I did.  At that time Bill was some sort of a research associate but at the time of his death in 1987 he held the rank of Senior Curator of Mineralogy and Invertebrate paleontology.  After locating him I was in awe of Bill’s knowledge of rocks and minerals around the Black Hills and was grateful for his time spent with a flatlander grad student.

After leaving South Dakota for Utah, Kansas, Missouri and Wisconsin I paid little attention to the minerals and rocks of the Black Hills until settling in Colorado and reliving my youth (at least giving it a try but probably unsuccessfully).  As readers of these postings realize, I have taken a real shine to phosphates and arsenates, especially those from the Black Hills. I am constantly on the lookout for interesting minerals while wandering thru the Hills or perusing the offerings of show dealers.  I also check the internet for minerals proffered by Tom Loomis at Dakota Matrix.

Only later in life, after I purchased used copies of his books (both written with George Rapp, Jr.) Mineralogy of the Black Hills (1965) and Encyclopedia of Minerals (1974), did I begin to take a stronger interest in Bill Roberts and his knowledge of minerals of the Black Hills—he was an amazing mineralogist. 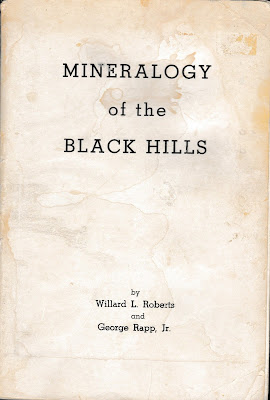 Norton (1989), in his memorial to Roberts, noted among many other achievements: 1) “that he added more than 100 species of minerals to the list known to occur in South Dakota; 2) he was involved with many new mineral discoveries and subsequent naming including---dernj'ite, ehrleite, fransoletite, jahnsite, johnwalkite, olmsteadite, metavivianite, pahasapaite, pararobertsite, perlofrte, robertsite (named after him), segelerite, sinkankasite, tinsleyite, tiptopite, walentaite, whitmoreite, wyllieite, a wicksite-like mineral that has been described but not yet named, and probably others that were overlooked when the list was assembled or that have not yet been studied; 3) his identification of carnotite in a specimen brought in by an amateur was the original discovery of uranium in South Dakota [and created a large-scale industry around the city of Edgemont]; and 4) their [his wife] private collection [of minerals] contained more than 30000 specimens.” WOW.  I also found it interesting (from the Memorial) that he studied “structural and field geology from A. J. Eardley.”  That really brought back memories since I also studied the same fields with Dr. Eardley (at the University of Utah), and he served on my Dissertation Committee.  What a serendipitous moment—ain’t life fun. 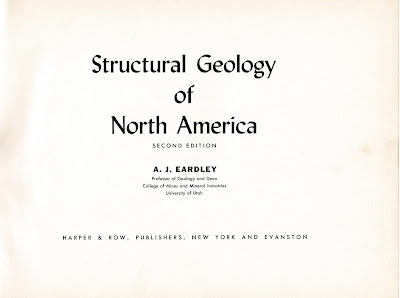 I had been looking for a specimen of robertsite, a hydrated calcium manganese phosphate [Ca2Mn3(PO4)3O2-3H2O], for a few years and finally was able to nab a specimen at a recent show.  Actually, I purchased the specimen for the tiny cubes of whitlockite, a calcium magnesium phosphate [Ca9Mg(PO4)6(HPO4)], and the robertsite was a find when I returned home and examined the matrix under a scope.  Another great bit of serendipity.
The specimen was collected from the Tip Top Mine near Custer in a pegmatite zone related to the Harney Peak Granite (~1.7 Ga forming the core of the Black Hills).  At last count 98 minerals had been identified from the pegmatite including 12 that count the Tip Top as their Type Locality; seven of these twelve have not been found anywhere else in the world!  The pegmatite is not “famous” for its large specimens but for microscopic crystals present within hydrothermally(?) altered beryllium and phosphatic rocks. Above information taken from a wonderful book by Lufkin and others (2009). 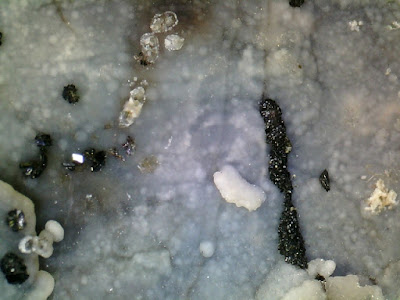 Robertsite is a secondary phosphate mineral with tiny black to brown to red to bronze lath-like or wedge-shape crystals although at times (see photo) the individual crystals occur in botryoidal aggregates.  Crystals are soft at ~3.5 (Mohs), sometimes with a transparent to translucent diaphaneity but mostly seem opaque, and have a luster ranging from vitreous to waxy.  Nabbing a small crystal and rubbing on a porcelain plate will impart black-brown streak.

Robertsite is closely related to another phosphate found in the Black Hills, mitridatite (see Posting Dec. 8, 2014), a hydrated calcium iron phosphate [Ca2Fe3(PO4)3O2-3H2O].  There seems to be some indication that an interchange between the iron in mitridatite and the manganese in robertsite—perhaps solid solution.

As previously stated, I purchased the specimen due to the gemmy, but tiny, rhombohedral crystals of whitlockite, a tricalcium phosphate (Ca9Mg(PO4)6(HPO4)] originally described from the Palermo Quarry in New Hampshire.  Whitlockite is, again, one of those secondary phosphates found (mostly, see below) in zoned granite pegmatites and is present at the Tip Top, Bull Moose and White Elephant mines.  The crystals from the Tip Top range from mostly transparent to translucent and are essentially colorless but also may tend to be white to gray.  Most of the Tip Top crystals are those nice rhombohedrals but in some places individuals are tabular to spherical and even?drusy.  Crystals are fairly hard, ~5.0 (Mohs), and the rhombs are vitreous if colorless and resinous if white.  The streak is also white.

A few interesting factoids about the mineral: 1) whitlockite has been identified in lunar samples and Martian meteorites and most mineralogists refer these extraterrestrial samples to the mineral merrillite; 2) whitlockite has been identified as forming in deposits of phosphate-rich bat guano; 3) magnesium-rich whitlockite can be found in many parts of humans and other animals ranging from bones to urinary stones to impediments in the blood vessels; 4) synthetic whitlockite is being tested for use in bone implants (it has a high compression strength); 5) the mineral bobdownsite is considered invalid and specimens should be referred to whitlockite.

So, there it is---more rare phosphates from the Black Hills, and especially the Tip Top Mine.  At many places in the Rocky Mountains old mines and their dumps are being reclaimed and vegetated and collecting nifty minerals is lost forever.  Fortunately, a geologist now owns the Tip Top and ensures its microscopic minerals, especially the rare phosphates, may be collected.  Tom Loomis is the resident expert on the phosphates and operates Dakota Matrix minerals out of Rapid City. 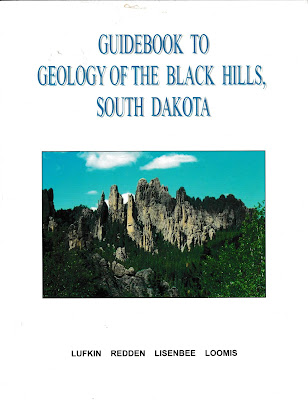