THE ARIZONA HILLS NEAR ORACLE 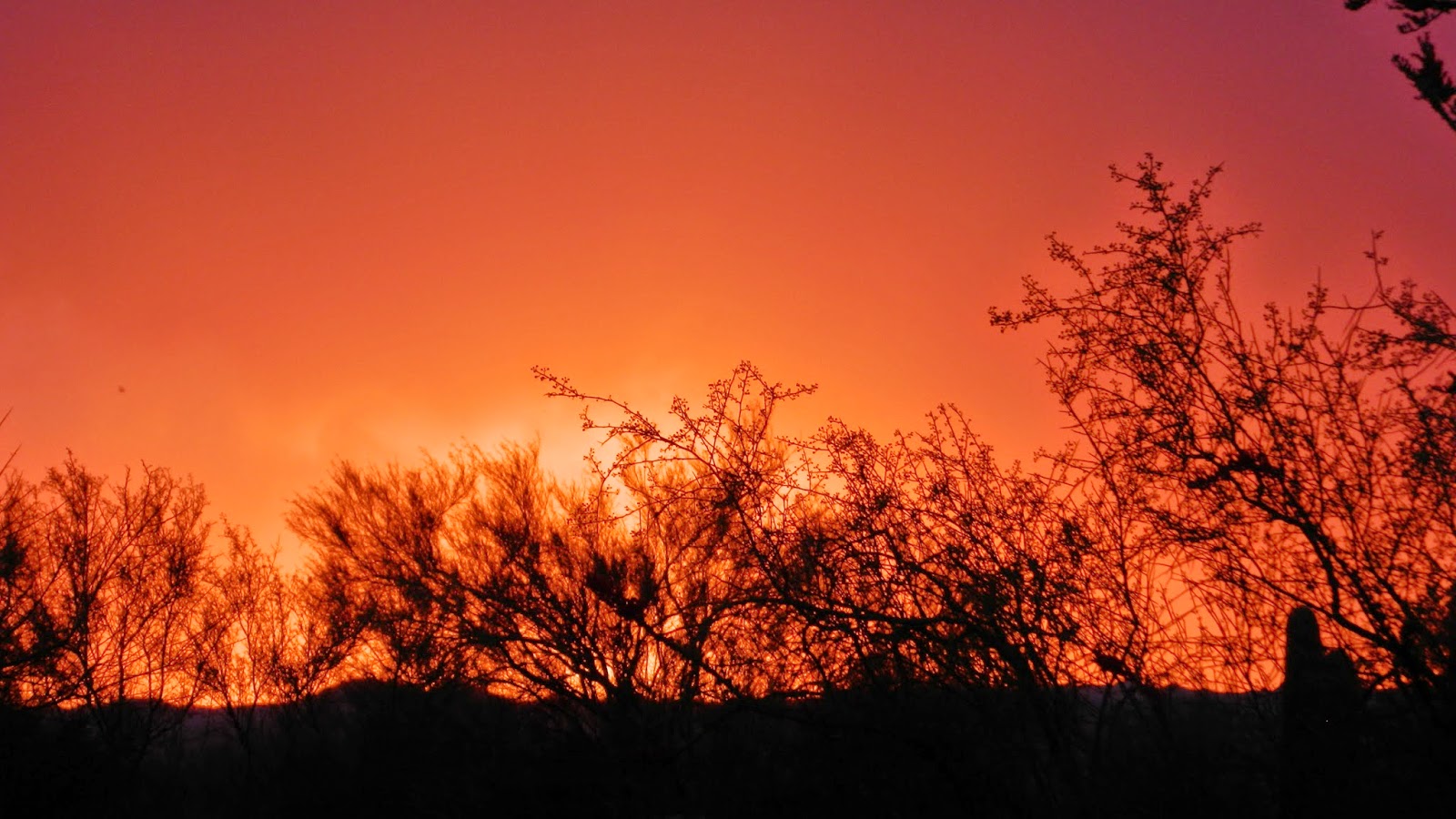 Each February I try and return to Tucson, Arizona, for the gem and mineral show (see numerous Blog postings) as well as to explore the surrounding countryside.  Of course, one of the more interesting geological localities is the Santa Catalina Mountains, the skyline-dominating range of north Tucson and Oro Valley.  There are very few roads heading into the western front and most travel is by foot.  However, the north end, and the “backside,” of the range have several trails and roads to explore by using the small community of Oracle as a base.  The major road from Oracle  heading directly into the interior of the Range is known as the “Control Road” and leads to Mt. Lemmon and the summer housing community of Summerhaven.  However, there are many smaller roads weaving in and out of the Range flanks and any traveler should obtain a good Forest Service map and/or topographic map.  These maps, besides showing the roads and trails, delineate the parcels of private land that are scattered throughout.

The Santa Catalinas have produced metallic ores such as gold, silver and copper; however, the Range has not yielded the huge deposits as at other nearby Arizona localities---for example, the Tiger/Mammoth/St. Anthony mines to the northeast and their deposits of gold, molybdenum, vanadium, lead and zinc and the San Manual copper deposits to the east.

It is not that gold is absent from the Catalinas for there have been several local “gold rushes” in the area, mostly around Oracle and the “backside” of the Range, but the yields generally have been low.  Mines were first staked and claimed in ~1880 and a geologist told me that perhaps 70-80 (or more) claims were posted close to Oracle.  He also informed me that shafts and holes are quite numerous but that many entrances are located on private property.  This trip I talked to some of the local residents and it appears that every year “some company” is about to reopen a gold mine, and plans on a big operation.  This “reopening” may be happening in the near future but the end product will be copper.

For several years Oracle Ridge Copper has been in the planning stages to reopen the Oracle Ridge mine located on the backside of the Range west of San Manual.  A February 2014 news release noted that core drilling and evaluation indicated the feasibility of producing substantial amounts of copper with some silver and less gold.  The company is progressing toward active mining.
The geology around Oracle is fairly complex---a big hunk of the Oracle Granite of Precambrian age (~1.4 Ga) with Tertiary intrusions and volcanics, much faulting, and evidently some Paleozoic limestones.  It is tough to find out much about the geology of the mining area but it seems as though the mineralization is related to faulting and I suppose hydrothermal alteration. Interesting Cenozoic features include the bajadas sloping off the range in all directions. They form as alluvial fans accumulate sediments at the mouths of canyons, and then with time these fans increase in size and coalesce into bajadas.  The second feature to appear in the area are boulder inselbergs, small hills of fractured granite arising from the bajadas.  An inselberg is an isolated “hill” and the Oracle inselbergs are in-place rounded boulders of the granite dissected by numerous joints. 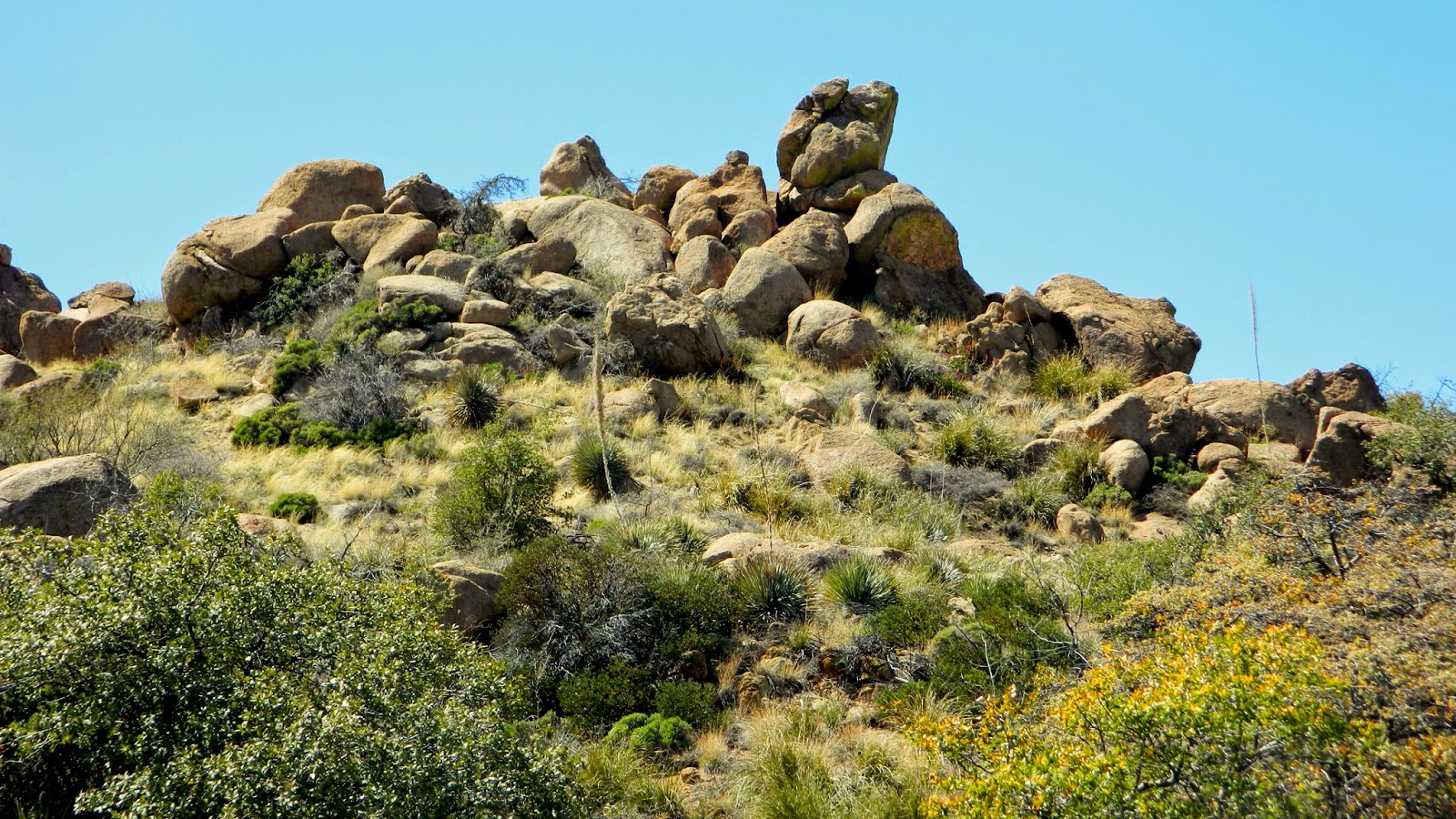 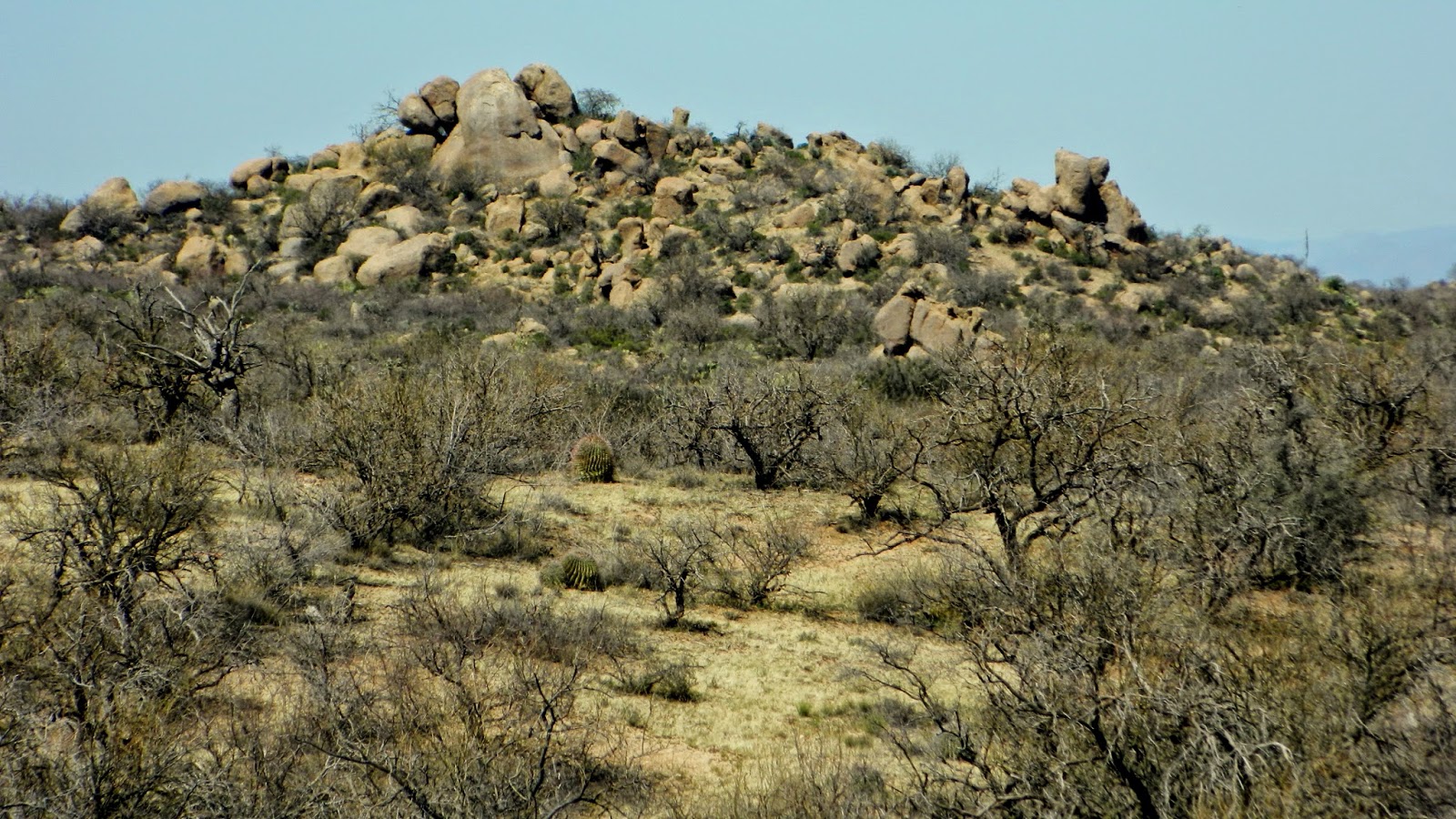 So, during my road trip I was driving around on the various minor country roads looking at the rocks and trying to decide if I wanted to explore since it appeared that much of the land was private/claimed.  I was also sort of spooked since I did not have on my gators and a couple of days before had seen a quite large rattlesnake.  I was hiking down a trail, minding my own business, and had adopted the geology stroll---keeping your eyes on the ground.  All of a sudden I stopped in my tracks after hearing a big buzzzzzzz, a sound that hikers and geologists never forget.  There it was, about 8-10 feet down the trail, coiled and unhappy that I had disturbed his nap in the sun.  I tossed a couple of small rocks in his direction, said something like “shoo snake”, and waited. Those actions only ticked him off and made him really mad.  I wisely decided that discretion is the better part of valor and took a wide detour.

In searching references it appears that many, many stories are out there about the gold and other metallic ores near Oracle.  Perhaps the most interesting are those associated with William “Buffalo Bill” Cody.  In a 1910 article in the Los Angles Times, BUFFALO BILL BEGINS MINING IN ARIZONA Veteran Scout and Showman Takes Up New Life with Old Comrades: In partnership with his old cronies, John Burgess, scout and prospector, and Colonel L. W. Getchell, mining engineer, Colonel W. F. Cody has started to develop 100 claims in southeastern Arizona (2000 acres) about 40 miles north of Tucson….The Cody-Getchell-Burges syndicate has turned six claims at Campo Bonito [near Oracle] into a $600,000 corporation under the style and title of the Campo Bonlto Mining and Milling company, and the first development work will be made there.
The mines at Campo Bonito contain gold, silver and tungsten and surface workings yield about $30 a ton The ore runs nearly 3 per cent tungsten [mining scheelite], a mineral which has come Into large use In the hardening of steel and in the manufacture of lamps…Colonel Cody carries in his pocket a nugget of pure gold taken from one of the Campo Bonito claims that is worth about $60, and he shows it with great pride, says a New York exchange.

Mr. Robert Zucker Tucson, Arizona native, author, former journalism instructor and newspaper publisher, is the CEO of Entertainment Magazine network, publisher of AZentertain.com. Zucker has researched and explored the Santa Catalina Mountains and has written a number of articles on the history of Oracle and the nearby mining districts. See http://azentertain.com/arizonagoldrush/ for other articles.  In addition, a local prospector, William “Flint” Carter, mines “Cody Stone” (gold in quartz) that the lapidary then turns into design jewelry and cabs.  Check out:  http://emol.org/irondoor/codystone.html.

All in all, it was a good day. It had been a number of years since I had visited Tiger/Mammoth so that was nice; however, a poor ole traveler like me could not get near the actual mine (appears mostly reclaimed). I did not locate the “lost” Iron Door Mine but did get to observe, rather closely, a splendid Western Diamond Rattlesnake (Crotalus atrox).  And in the evening the Arizona sunsets (with some dust and pollen in the air) are spectacular, just like the gold.  Life is good.
Posted by Mike at 8:59 PM No comments: