ARSENIDES FROM YOOPERLAND SHINING IN A BUCK MOON

The summer solstice was passed about six weeks ago, and my friends are upset when I causally mention that we have “lost” (and are continually losing) daylight here in Colorado Springs---about 45 minutes by July 31, another 66 in August!.  To emphasize, even more, that fall is on the way I noticed that some schools have started and conversation in the coffee shop is about the Broncos practicing up at Dove Valley in southeast Denver (the Rockies are out of fashion and no one is looking for a Rocktober).  One item that is sort of “out of whack” is the snowpack in the mountains---many ranges are still rather white and A Basin was still skiing on July 1.  Fishers are complaining about the high waters in virtually every stream with mountain runoff.  Unfortunately, the last count for drowning in the high-water streams was up to 12.  But fall is on its way and I can smell it when the morning temps are in the 50s here in the city, and cooler up in the mountains.  The “baby” birds have fledged and are out of the nest and my prairie grass has bloomed and started to cure.  Fruit and veggies are pouring into Farmer’s Market, especially from the truck farming area of Rocky Ford along the Arkansas River southeast of the city.  Bears seem everywhere in this part of the city and the cubs are growing, as are the fawns.  I am not ready for cold weather, but I do enjoy seasonal changes and fall/autumn is a wonderful time. We are finishing July with a Black Moon tonight, simply a rather uncommon second New Moon of the month.  It is similar to a Blue Moon, the second full moon of a month.


Did you know that neither a Black Moon or a Blue Moon are possible in the month of February since the cycle between these particular moons is ~29.5 days? Every 19 years February does not have a Full Moon!  We, at least in this part of the world, term the July Moon the Buck Moon due to the growth of antlers on deer, and boy are there some large racks around here.  I am certain that Mr. Rockhounding the Rockies (a meteorologist) is well aware of moon phases. 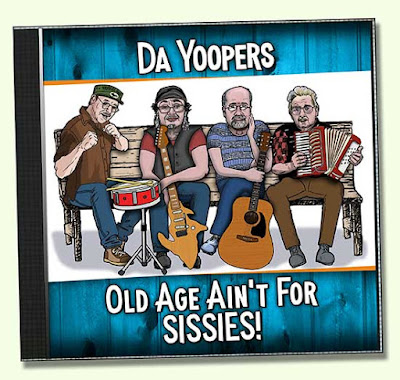 All of my daydreaming about weather changes (along with decorations for sale in big box stores) reminds me that the holiday season is approaching down the road and along with that comes one of the classic Christmas songs—Grandma Got Run Over By A Reindeer (Randy Brooks).  That in turn reminds me of the Upper Peninsula of Michigan (UP) and the Da Yoopers who recorded the Christmas classic Rusty Chevrolet: 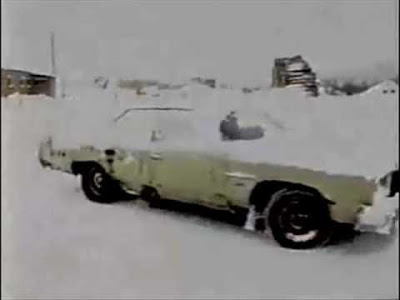 OK, I understand that I have a weird sense of humor, but it does not take much to make be smile.  And besides, Da Yoopers remind me that I purchased, at the La Crosse Show, a nifty arsenate mineral collected from the UP.


If you are not from the upper Midwest, at the mention of Michigan most rockhounds automatically think of the big to huge copper nuggets although some of my friends who did poorly in grade school geography class mix up the states of Michigan, Wisconsin and Minnesota.  These confused rockhounds shout out Lake Superior agates, and it is true that Lakers can be collected in all three states.
The original source of the Lakers, and the copper nuggets, is from the basalts (several different layers) located in the Midcontinent Rift System (MRS).  This geological rift (think about the great East African Rift Zone) begin to form in the Precambrian (Proterozoic Era) perhaps 1.1 Ga splitting the stable part of the North American “continent” or plate (referred to by geologists as the craton).  The Rift is nearly 1400 miles long extending from northeast Kansas to Lake Superior with an eastern arm curving around and heading toward Ohio and a shorter arm trending west along the Minnesota-Ontario border.  Hugh amounts of lava erupted along faults while adjacent rivers from the uplands dumped thousands of feet of sediments (later sedimentary sandstones and conglomerates) into the lowlands of the Rift.  For some reason the Rift “stopped splitting” (a failed rift in geological jargon) and the continent healed. To fix this image in your mind, just imagine the top crust of a pie and how triple cracks develop during baking (but magnify it by zillions!). Perhaps the compression stopping the rifting was the result of orogenic activity (mountain building) on what we now know as the east coast of North America.
Most of the rocks in the rift are buried below the surface of the earth and are only known from geophysical studies and drill holes.  For example, the Midcontinent Geophysical Anomaly (MGA) in Kansas delineates the rift since the concentration of magnetite in the Rift rocks creates a magnetic “high” that is picked up by geophysical instrumentation. However, rocks of the Rift become exposed around Lake Superior and the amygdaloidal agates erode from the basalts.  Since the Rift rocks include substantial amounts of iron, the agates have some sort of a red or orange color---oxidized iron.  Most likely the agates formed post-deposition of the basalt and are the result of percolating silica-rich groundwater filling the many vugs or vesicles in the basalt.


The UP copper is also found in rocks associated with the Midcontinent Rift System.  Scientists at Michigan State University have described the (www.geo.msu.edu/geogmich/copper.html ) formation of UP copper as follows: most of the native copper occurs at the top of the MRS basalt in a unit known as the Portage Lake Volcanics/Lavas.  However, this series actually contains over 200 individual lava flows (now basalts and some rhyolite), and 20 discreet conglomerate beds, that collectively have produced over 11 billion pounds of copper.  Over one billion pounds of copper have been extracted from copper sulfides (mostly chalcocite, CuS) in the overlying Nonesuck Shale.  The original source of the copper was from secondary deep-seated hydrothermal solutions percolating toward the surface with native copper crystallizing in the open vugs and pore spaces of older Rift rocks.  Most of these native copper deposits are found in the Keweenaw Peninsula “sticking out of the UP into Lake Superior” and home of Michigan Technological University with the fabulous A.E. Seaman Mineral Museum.
South of the Keweenaw, but still in the UP (and adjacent Wisconsin), are the Precambrian Iron Ranges where the original sedimentary rocks have been subjected to metamorphism creating the ores.  The mining of various iron ores “has had a long and significant on the socio-economic development of the Northern Peninsula, beginning in September, 1844…” (Heinrich and others, 2004).
So, although the copper and Lakers are the most familiar specimens from Yooper Country, the MRS and Iron Ranges have produced an amazing number of collectable minerals.  Interested readers need to consult Mineralogy of Michigan (Heinrich and others, 2004), and if ever traveling near the UP visit the A.E. Seaman Mineral Museum.


I am always interested in arsenic minerals and so was able to secure a couple of specimens containing copper and arsenic, but they are a bugger to identify. There are two principle copper arsenides found in the Keweenawan rocks (Heinrich and others, 2004)—domeykite [Cu3As] and algodonite [Cu6As] and they appear, at least to an ole clunker like me, to be very, very similar in appearance—silver shiny, steel gray, massive, tarnishing to bronze to iridescent to dull dark (black)!  Both are soft at ~3.5-4.0 (Mohs).  They occur with other “silver-shiny” minerals such as skutterudite, nickel skutterudite, and silver in addition to brass-shiny arsenian copper.  However, there are differences between the two minerals: 1) algodonite is in the Hexagonal mineral system and the chemical formula is “officially” written as Cu1-xAsx where x=~0.15.  In my understanding the mineral contains 83.58% copper and 16.42% arsenic. The density averages ~8.5; 2) domeykite, Cu3AS, belongs to the Isometric crystal system and contains 71.79% copper and 28.21% arsenic.  The density averages ~7.65.  So, the additional arsenic (density ~5.7) in domeykite compared to less copper (density ~8.94) would reduce its density.  However, since the minerals are usually massive crystals cannot be observed visually, and both minerals are often found with other metallic minerals, so separation is often impossible to determine density. And finally, stuck in the middle of this mess is a rock called mohawkite that is a mixture of domeykite, algodonite, arsenian copper, skutterudite, silver and perhaps nickel. 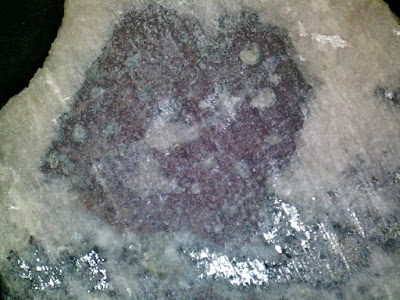 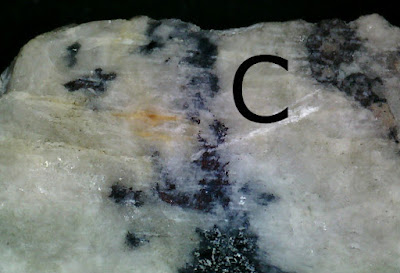 
I am uncertain what all of this means.  In the days of wet chemistry analyses (no electronic gizmos) geologists and chemists identified several other arsenide minerals; however, their favorite was mohawkite.  In todays world most of these early identified minerals are no longer considered valid minerals, including mohawkite.  The only thing certain to me is that arsenic and copper form numerous shiny specimens that are probably algodonite, domeykite, or mohawkite so rockhounds should be prepared to see any of these labeled as such!


So, I have two specimens.  One has a silver metallic mineral (on a fresh break but tarnished to a dull black on an “older” surface) in a calcite matrix with a few small quartz crystals.  I call this domeykite.  The second is a smaller specimen without matrix consisting of a shiny sliver mass with some arsenian copper (I think), a few small quartz crystals, some black mineral and some iridescence. I would like to call it mohawkite but perhaps I am pushing my luck!  While pouring over the photos in MinDat it appears, to me, that rather identical looking specimens are one person’s domeykite, another's algodonite, and another’s mohawkite!


I have also noticed that the arsenic must be tightly tied to the copper since there are numerous cabochons of these copper arsenides “for sale” on certain web sites.  Any "loose" arsenic would not be good to breath in!

This small posting is dedicated to Yoopers Pete and Jane probably relaxing on the front porch of their UP lake cabin.

I recently acquired, from a German dealer, a small specimen labeled "Algodonit [algodonite], Mohawk Mine, MI, USA." Again, it is really tough to distinguish between the copper arsenides. 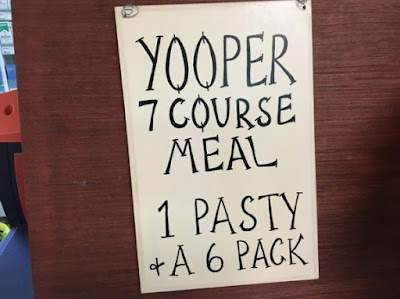 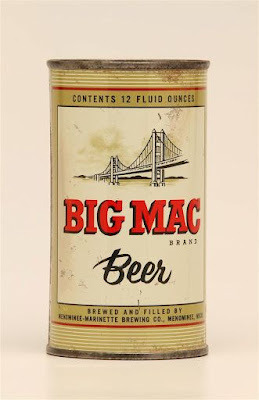 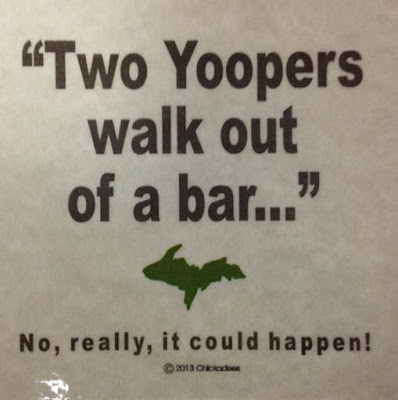 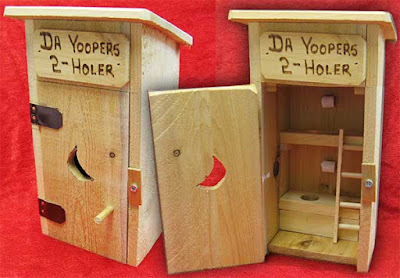 Check out the web site www.dayoopers.com 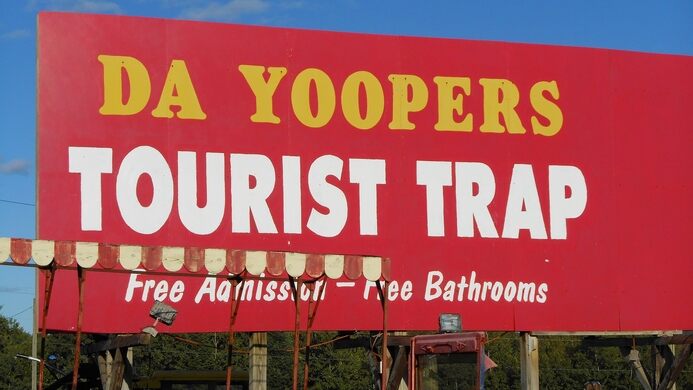