In previous postings I have often written about the vanadates, along with the phosphates and arsenates, where vanadium bonds with oxygen to form a radical, VO4, with a charge of minus 3: (VO4)- - -  .  This anion then combines with metals or semi metals to form minerals.  And at times, PO4 and AsO4 substitute for the VO4.  However, vanadium also occurs in minerals where it acts as a cation with a plus 5 (usually) charge, V+++++.  One such mineral in this group is volborthite, a hydrated copper vanadate hydroxide [Cu3V2O7(OH)2—2H2O].

I have a couple of specimens purchase several years ago before Ackley’s Minerals, a small shop here in Colorado Springs, closed as the proprietors “retired” to the farm north of town.  Volborthite is a rare mineral that usually is observed as small, yellow to yellow-green “scales” encrusting part of a rock’s matrix.  The luster ranges from vitreous to opaque but is usually classifies as pearly.  The “scales” often may be seen as individuals but many times they are stacked on one another, and without magnification, appear as massive encrustations. On some specimens, but not mine, the small plates of volborthite form clusters of rosettes. The hardness is ~3.5 (Mohs) and I was able to get a light to pale green streak.  Volborthite does not fluoresce under a UV light. 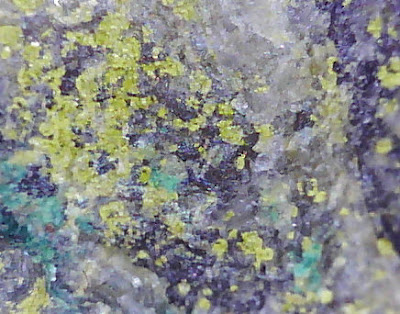 Volborthite is usually found in the highly-oxidized zone where hydrothermal solutions (coming off hot bodies of intruded magma) have deposited other vanadium-bearing minerals.  In the Colorado Plateau Type deposits, a sandstone-hosted mineral deposit, vanadium minerals often occur with uranium minerals; therefore, rockhounds originally believed minerals like volborthite were radioactive (just the radioactivity coming off the uranium minerals).  But, vanadium is a critical component of some uranium minerals such as carnotite: K2(UO2)2(VO4)2--3H2O.

Karpenkoite [Co3V2O7(OH)2—2H2O] is the cobalt analogue of volborthite since cobalt substitutes for the copper.  Martyite is the zinc analogue when zinc replaces the copper [Zn3V2O7(OH)2—2H2O].  Engelhauptite has the water (H2O) molecules replaced by potassium and chlorine molecules [KCu3(V2O7)(OH)2Cl].

My two specimens came from the Copper Hill Mine, Picuris District, Taos County, New Mexico, and according to the rock shop proprietors, were collected decades ago.  The Picuris District is part of the Sangre de Cristo Mountains and “is best known for the Harding pegmatite, a Proterozoic [late Precambrian] complex-zoned pegmatite, which has produced substantial amounts of beryl, lepidolite, spodumene, and tantalum-niobium (microlite) minerals” (McLemore and Mullen, 2004).  However, the Copper Hill Mine is a “strata-bound” copper-silver-antimony deposit” (Williams and Bauer, 1995) that produced the volborthite specimens.

I have been unable to locate much information about volborthite from the Copper Hill Mine.  In fact, MinDat does not list a primary vanadium mineral from Copper Hill; therefore, I “do not know” (no surprise here) where the vanadium “came from”?
REFERENCES CITED