One of the largest venues in the Tucson Shows arena is the 22nd Street Gem, Fossil, and Mineral Sow located near the intersection of I-10 and 22nd Street.  The Show has an extra-large center tent (835' x 100') with smaller, but large, adjacent tents on each end. The south end tent is the Showcase tent with carpeting, stage lighting, ten foot high modular walls and high end material.  The north tent is smaller and with only a couple of larger dealers (one wholesale only). I have not specifically counted vendors, but my estimate is ~325-350. It is also one of the few venues that advertises via billboards scattered around town, bus shelters, etc..  I would also say it has the most crappy and roughest parking around (and they charge to park).

The center tent is mighty large with 6 rows of vendors stretching the length and contains beads, mineral specimens, fossils, salt lamps, jewelry of all kinds ranging from junk to several tens of thousands of dollars, paintings, carved figures, and lots of other “stuff.”  Over the last decade it seems as if specimen dealers decrease in number each year. 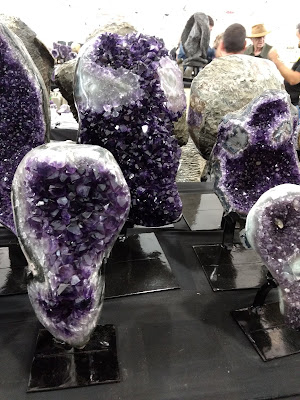 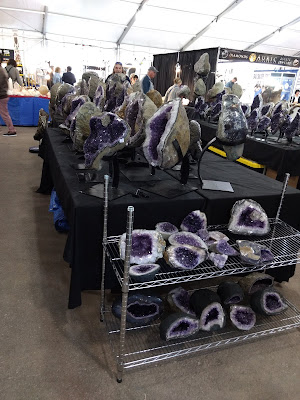 So, if one slowly traversed the three major long aisles and examined goods on either side a visitor might spend the better part of a day immersed in looking and spending.  However, I was more interested in examining mineral specimens so tended to skip the beads and other paraphernalia.  I did stop to visit a few of the vendors displaying vertebrate fossils since some fantastic specimens were available for sale.

As for buying, I was amazed to locate a nice thumbnail of wulfenite (lead molybdate) collected from Utah.  The specimen, in a perky box, was marked $30 but after a conversation the price was lowered to $5, something more in my range.  Evidently a solitary Utah specimen was not in great demand as this was Arizona and the hype was to buy Red Cloud wulfenite.  Short story—I left happy, really happy, since  Utah wulfenite is not  common on the mineral market. 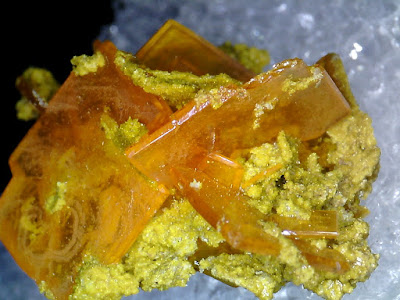 The Harrington-Hickory Mine is west of Milford in Beaver County in the Star-North Star Mining District.  Originally claimed as a lead-silver-copper mine, it was worked from 1872-1875, 1900-1925, 1933, 1943-1949 and sporadically after 1962.  The host rocks for the metals were the carbonates of Permian Kaibab-Plympton Formations (undifferentiated), and thin shales of the Triassic Moenkopi Formation.  Mineralization was along contact zones with late Tertiary quartz monzonite and granodiorite igneous intrusions (Western Mining History, 2019).


The major hypogene ore was galena (lead sulfide) that had a high silver content.  I could not locate information about total production; however, the mine was not a significant producer.  Today it is best known for the magnificent tabs of orange to orange-yellow wulfenite although I am uncertain about current collecting or claims.