Arizona has many mines that have produced an amazing account of minerals.  Virtually every natural history museum in the world has displays of Arizona minerals, especially those related to copper—think raw copper, cuprite, azurite and malachite.  Out of these available minerals, collectors seem to focus on the widespread copper carbonate, azurite, and the less common lead molybdate, wulfenite, PbCuO4; both minerals are secondary in origin and are found in the oxidized zone. The azure blue azurite was often found in large pieces that make fantastic display specimens.  Wulfenite crystals are generally small, an inch is large, but occur in a wide variety of luscious red to orange to yellow specimens.  Museums collect azurite while mineral collectors and rockhounds “love” wulfenite.


Wulfenite may be found in numerous Arizona copper mines and ranges widely in color and size.  But one mine in particular, the Glove Mine, produced fantastic specimens of “black wulfenite.”  Actually the “black” wulfenites are “regular” crystals that have been covered with, or partially/fully pseudomorphed to, the lead manganese oxide coronadite [Pb(Mn6++++Mn2+++)O16].  The transition metal manganese has a large number of oxidation states from +2 to +7.  In coronadite there are two oxidation states present, +4 and +3.  In some older articles one might read the black mineral on wulfenite is some other manganese mineral such as cryptomelane, pyrolusite or psilomelane; however,  it now appears that geologists have settled on coronadite.  The black (actually more dark gray) manganese minerals are notoriously difficult to tell apart without some help from a gizmo such as an XRD. 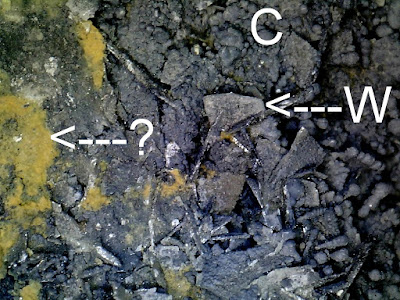 The Glove Mine is located about 50 miles or so southeast of Tucson in the southern Santa Rita Mountains, Santa Cruz County, in the Tyndall Mining District.  Olsen (1966) described the mine as having three different levels based on mineral assemblages: 1) the lower and primary sulfide zone contains silver-rich galena, pyrite, chalcopyrite, quartz and sphalerite; 2) above that level is a silver-enriched intermediate zone of cerussite, smithsonite, anglesite and minor wulfenite; and 3) the upper oxidized zone of cerussite, wulfenite, and anglesite.  Hydrothermal solutions associated with a Laramide (late Cretaceous ~75 Ma to early Tertiary ~65 Ma) intrusion moved along fault zones and deposited the lower primary sulfides. Minerals (often specimen minerals) of the upper oxidized zone were concentrated in solution cavities in the host late Paleozoic Naca Limestone.  Rasmussen (date unknown) noted that wulfenite never forms without the presence of the lead carbonate cerussite and the only molybdenum needed is that found in the ground water during leaching and oxidation.  In fact, wulfenite is rarely found in rocks containing the mineral molybdenite.


William Ascarza of the Arizona Daily Star summed up the history of the Glove Mine (and associated holdings) in a 2016 article.  He noted that the first original claim was staked in 1911 after discovery in 1907 and primary sulfides of lead, zinc, silver, copper were mined along with a small amount of gold and molybdenum (from the wulfenite I presume).  During the early mining days, a mule team wagon transported the ore to the rail station a few miles west at Amado and then it was shipped to a smelter in El Paso, Texas.  Mining was mostly shut down between 1918 and 1951 but in the 1950s workers again begin excavation and produced about 5,000 feet of underground “tunnels” in the various claims.  The Glove was the richest of the claims as the ore averaged about 14% silver and 40% lead.   Mining continued, intermittently, for the next couple of decades with the ore now going to a mill in Demming, New Mexico, and later to the Tonto Basin Mill.  Excavation continued into the 1980s but sometime in that period (I think) shut down and a 2011 fire badly damaged the structural integrity and the mine is now closed but still under claim.


Wulfenite is generally a collector mineral although in quantity it has been used as a secondary ore of molybdenum.  Rockhounds appreciate the mineral for its classic thin and tabular crystals (there are other forms such as dipyramids, however) with beautiful colors ranging (usually) from yellow to orange-yellow to honey-yellow to reddish orange.  The Red Cloud Mine in Arizona has produced classic deep red crystals.  At times the crystals are less spectacular in color and appear as green, brown, gray and some are colorless. Crystal color seems related to impurities during formation. Crystals are usually vitreous to sub-vitreous in luster unless coated with manganese oxide or some other mineral.  Wulfenite is soft (~3.0 Mohs), has a white streak, and belongs to the Tetragonal Mineral System.  Individual crystals may be transparent, especially if thin, but darker colored and thicker crystals are opaque.   The brittle and thin crystals break easily and collectors are aware that a prized specimen must be protected.


Wulfenite is in solid solution, and forms a series, with stolzite [Pb(WO4)] since the MoO4- - and WO4 - - ions are about identical in size and shape.  As I understand, most wulfenite has some tungsten and stolzite has some molybdenum in their chemical compositions.


Wulfenite is pseudomorphed by a number of minerals, including but probably not limited to: bayldonite (lead coper arsenate hydroxide), conichalcite (calcium copper arsenate hydroxide), dolomite (magnesium carbonate), malachite (copper carbonate hydroxide), mottramite (lead copper zinc vanadate hydroxide), smithsonite (zinc carbonate), stolzite (lead tungstate) (list from www.tsumeb.com) and quartz (silica dioxide), vanadinite (lead vanadate chloride), coronadite (lead manganese oxide).  I could not locate much information about the “cause” of such pseudomorphic processes. My guess is that a mineral, such as wulfenite, is produced under specific physical and chemical conditions and is stable.  With an interruption in these stable conditions a new mineral crystalizes but does not change the external shape of the original mineral.  In some cases, only a “crust” forms over the original mineral (is this a “real” pseudomorph?).  In other examples the original mineral is partially or fully replaced.  Any other knowledge about pseudomorphs is above my pay grade.


I think all rockhounds dream of hitting a bonanza of minerals in a “pocket”; however, that is a fairly rare occurrence.  Around Colorado Springs in the Precambrian pegmatites experienced specimen miners sometimes locate pockets of fabulous colored topaz crystals, or aquamarine crystals in pegmatites on Mt. Antero.  My friend, Mr. Rockhounding the Rockies, has been known to pull 40-50 smoky quartz crystals from a single pocket but on other days perhaps just a broken fragment shows up.


In reviewing information about the secondary mineral deposits at the Glove Mine I came across an article by Gene Shlepp describing his find of wulfenite crystals in one of the limestone solution cavities: “It is probably every mineral collector’s dream to have been able to collect wulfenite specimens in the Glove mine.  I was fortunate enough over the last fifty plus years to have been able to collect there. Sometimes the collecting was profitable, sometimes it was not.  Several times in the 1980’s and early 1990’s I had leased the mine [and was quite successful on one trip].  After thirty feet of mucking, we were able to reach the bottom of the old stope from the 1950’s. There we discovered an open cavity six feet long and approximately two feet high. The cavity was lined with fine thin yellow wulfenites up to 1 ½ inches.  This really made our hearts pound as we collected and packed the material in boxes. After taking them to the upper level of the mine, where they would be safe from anymore drilling or blasting we had to do, it was time for a couple of cold brews.”  Again, most rockhounds can only dream of such a find.

Both specimens came from one of my favorite rock and mineral shops, the Tucson Mineral and Gem World on South Kinney in the southwest part of the city.  This is a "real" rock shop with lots of dust, flats of minerals, thumbnail drawers, less expensive specimens, and two very nice and talkative brothers who have been in business 50 years.  They encourage exploring the shop and "give away" specimens to young rockhounds.  It is worth a visit if you are in Tucson.