Readers of this Blog realize that many of my formative years as a university student were dominated by both the conflict in Southeast Asia and the Civil Rights movement in the United States.  In the meantime, I was just trying to be a good student, complete my degrees and move on with my life--wherever that was leading.  I had a great time in graduate school at the University of South Dakota (USD), met many nice fellow students, had some interesting thesis field work in the “badlands,” and married a few days after graduation in August 1967.  One item that stands out in my mind is the great abundance of ROTC students on campus.  Several officer candidates were in my geology labs over the two years and many/most wanted to head to Southeast Asia since that was the best route to promotion.

My next stop was at the University of Utah, a school I picked since it was “close to the mountains.”  It was so near, in fact, that some classes walked to the exposures in the western flank of the Wasatch Mountains.  It was a much larger institution than USD and a complete change for a small town kid like me!  Although in the late 1960s Utah was almost a theocracy, the general attitude of the University students was changing toward the war in Southeast Asia---from one of partial support to one demanding withdrawal of troops.  In early 1968 the Tet Offensive was a series of attacks by the Democratic Republic of North Vietnam against numerous cities and communities in South Vietnam.  The death of so many people sort of stunned the US citizens and massive demonstrations occurred across country.  This sort of activity continued during the years and months at Utah until I left in summer 1970.  It seemed especially disturbing in May 1970 when four students were killed at Kent State University.  At any rate, I had tried to remain a conscientious student and immersed myself in research and studies---all the while sending my grades and enrollment details to the local Draft Board in Kansas.

I finished my field research in summer 1970 and accepted a position teaching geology at Fort Hays State University in western Kansas.  The students at Fort Hays were not as active politically, or so it seemed, as those in Utah but students were greatly concerned about their future.  There was an underground sort of whispering among the faculty about keeping students from receiving a failing grade.  If they failed a single class their GPA usually was not high enough to satisfy Draft Boards and they entered the service of the United States.  I had nothing but respect for those who served, and tried to help assimilate returning veterans into the University community.  It was a tough time as the war lasted until 1975 although US troops had withdrawn earlier.
What does all this banter mean?  Mostly that 1970-71 was somewhat of a tumultuous time in my life.  I started my new job in August, although the first paycheck did not arrive until October 1 and it was tough to make expenses.  I was assigned to teach four courses: Invertebrate Paleontology, Sedimentary Geology, Introduction to Geology, and Ground Water Resources of Western Kansas.  The first three were reasonable; however, I had never experienced a ground water course in my life!  I spent tens of hours trying to keep ahead of the students.  In addition, I started writing my dissertation as I came to Fort Hays ABD, an acronym hated by Ph.D. students as it meant “all but dissertation.”  It was not the best situation but my fellowship had expired at Utah and I badly needed a job---$9000 a year.  After rent, car payments, taxes, retirement investments, and health care there was not much left.  On February 9, 1971, my spouse finished typing the first draft of my dissertation (I never learned to type although today I am a pretty speedy two-fingered word processor) and the next day my son was born. But, we all survived.

Upon arriving at Fort Hays I knew little about teaching as the Ph.D. is a research degree.  I had taught Intro to Geology at Utah but was just sort of thrown into the class at the last moment when a faculty member received a big grant and “purchased” his classroom release.

New faculty members at that time usually “taught as they were taught.”  Luckily I had some great mentors at Utah where the geologists were pretty much field geologists and took their students on many field trips.

So, about the first thing that I did at Fort Hays was to plan for a field trip to eastern Kansas with the Invertebrate Paleo class—Road Trip.  Why this part of the state?  Well, I wanted to go in October when the trees and grasses in the Flint Hills were at their finest colors, and because the Permian and Pennsylvanian rocks provided world-class collecting of invertebrate fossils.

The Flint Hills provide so many places to collect that it was difficult to pick out sites and in the initial first and second years of the autumn trips I just sort of blindly picked outcrops---and we were successful.  During those days (and until I left in 1991) I required students to compile a collection of fossils complete with proper curatorial information and a notebook with stratigraphic sketches.  Most students turned in about 100 different species from the Flint Hills and everyone, and I mean all students, had a hunk of limestone containing “fusulinids.” 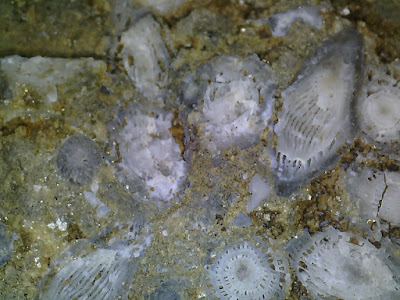 What are these ubiquitous Paleozoic fossils?  They are single celled organisms that create calcareous shells but lack tissues and organs and belong to the Phylum Retaria.  I usually shy away from fossil classification schemes but believe it important that readers know the Retaria contains the Radiolarians (siliceous shell) and the Foraminifera (mostly calcareous shells).  These single cell organisms occur in all sorts of marine environments.  The fusulinids are large (compared to most other foraminifera) and generally shaped like grains of wheat.  In fact, over the years I received many visits from the general public wanting to know about their “fossilized wheat!”  The fusulinids range from the Silurian to the end of the Permian when they succumbed to the great Permian-Triassic extinction event.  But, during their “heyday” in the Mississippian to Permian fusulinids often were excellent index fossils (age indicators), were extremely common, and occurred in unbelievable numbers of individuals.  In some limestones found in Kansas the shells compose most of the rock! My specimen is a part of the Biel Limestone (Pennsylvanian).
The other rock that I want to emphasize in this small Post is an extremely fossiliferous bed in the Matfield Shale (Permian). Unlike the Biel Limestone specimen where a single species dominates, the densely populated shale contains an impressive number of species.  The Biel and Matfield are remnants of warm tropical-subtropical waters associated with the late Paleozoic continental marine waters.  When these waters retreated from North America, probably as the result of continental collision, many of the invertebrate and single-celled animals that had existed for large parts of the Paleozoic Era became extinct. 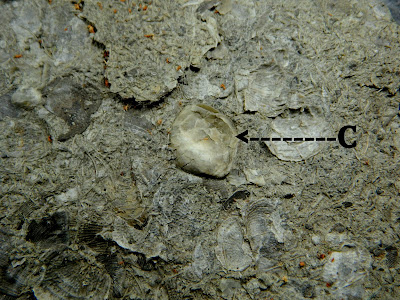