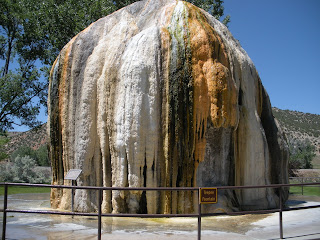 Thermopolis, Wyoming, is an interesting city (pop. ~3200) located at the southern end of the Big Horn Basin on U. S. 20.  The city was named after the Pass of Thermopylae, famed in Greek history as the Spartan battle ground. The word is combined from the Greek derivative which is literally translated “City of Hot Mineral Baths” (www.wiki.wyoming placenames.org).   The Big Horn River runs through town and carves the beautiful Wind River Canyon as it cuts across the Owl Creek Mountains to the south.  As an interesting sidelight, the Wind River changes names (to Big Horn) as it leaves the canyon flowing north!  Thermopolis is a common rest stop on the way to/from Yellowstone National Park and has a long history of thermal spring use by Native Americans and later settlers.  Most of the springs were, at one time, located on the Shoshone Reservation (ceded to the tribes in the 1868 Fort Bridger Treaty) but were acquired, through purchase, by the U. S. Government in 1896.  The city now bills itself as home to “The World’s Largest Mineral Hot Springs” and also is home to Hot Springs State Park.  In addition, there are at several other hot springs or wells in or near the city.
As the great conservationist Aldo Leopold once said, everything is connected to everything else. So it is at Thermopolis where all of the springs and vents are connected to the same thermal system with total discharge perhaps over three million gallons per day (Breckenridge and Hinckley, 1978).  However, to a geologist, or even causal traveler, the most interesting aspect of these wells/springs may well be the related travertine deposits.
The springs at Hot Springs State Park are those most visited by travelers, especially visitors wanting to “take a soak”!  Most of these related waters have high concentraions of Calcium, Magnesium, Sodium and Potassium ions and make human consumption somewhat problomatic.  I can personally attest to gastric discomfort (especially in 105O F summer weather) after consuming similar water while working in South Dakota!  The thermal springs also have fairly high concentraions of HCO3 (bicarbonate ion), SO4 (sulfate), and Cl (clorine).  The pH usually is calculated as between 7-8 (basic), about the same as sea water.
White Sulphur Springs is one of the largest springs in the park with a temperature of ~127O F and flowing at a rate of about 200 gallons per minute (gpm) (Breckenridge and Hinckley, 1978).  The name most likely comes from its content of Hydrogen sulfide (H2S), a compound notorious for the foul smell of rotten eggs.  At one time sulphur was mined from deposits near the spring.

Black Sulfur Spring in the park is now inactive but does form a pool in bottom of a 20 foot cavern with bubbling mud high in sulphur.  Dye tests indicate the spring now has Terrace Spring as its outlet (Breckenridge and Hinckley, 1978).
The spring in the park that most visitors are familiar with, and the largest, is Big Spring with a temperature of ~133O F and a flow of over ~2900 gpm (Breckenridge and Hinckley, 1978).  The spring water enters a 25-foot pool and then feeds the State Bathouse pools and pools/tubs of five commercial establishments.  The commercial entities vent their water vapors via a standpipe and this action has created a really interesting phenomenon known as Teepee Fountain (see at top of article).  This feature is a 20-foot high cone of travertine streaked with algal growth, a very impressive piece of artwork.
North of town is another interesting thermal feature—Sacajawea Well, first drilled for oil in 1918.  Evidently at the 900 foot level the well hit artesian pressurized hot water that blew the drilling rig off the casing!  Travertine began forming around the pipe and continues today.  The well flows at 1.37 million gallons per day at ~130O F.
Travertine is a sedimentary rock, a type of chemical limestone, that usually precipitates from carbonate-rich waters associated with springs (especially thermal springs), streams (especially waterfalls), and caves. Both calcite (CaCO3, forms in trigonal crystal system; most stable of calcium carbonate polymorphs) and aragonite (CaCO3, a polymorph of calcium carbonate forming in orthorhombic crystal system; is metastable and alters to calcite) are found in travertine with the former usually found in cooler waters and the latter in hot water (Pentecost, 2005).   Travertine commonly forms when dissolved carbon dioxide (CO2) in peculating groundwater, in this case the springs, creates a weak carbonic acid (H2CO3) that then reacts with limestone (CaCO3) to form soluble calcium acid carbonate [CaH2(CO3)] which then precipitates when the water evaporates at an exposed surface (Rogers, 2011).  Pure travertine is generally white but impurities commonly impart a brown/tan color to the rock.  However, the bright colors at Thermopolis are due to thermophilic (heat loving) organisms: Bacteria (Schizophyta), Blue-green Algae (Cyanophyta), and Green Algae (Chlorophyta).  The algae are phtosynthetic in nature and contain green chlorophyll and impart a green color to the travertine.  In addition, the Blue-green Algae have a blue pigment, phycocyanin.  Some, such as those at Thermopolis also contain red, yellow, brown and orange pigments (Terrell, 1978).  The Bacteria lack a cell nucleus and are non-photosynthitic but may use sulphur in the water as part of their food production.  They may impart colors from white to pink/purple to yellow (Terrell, 1978).
Breckenridge and Hinckley (1978) described the geohydrology of the artesian Thermopolis thermal system as follows: water enters the Paleozoic rocks (all are aquifers but especially the Madison Limestone) exposed in the nearby Owl Creek Mountains.  These rocks are capped by the Jurassic Chugwater Formation, a rather impervious caprock, and dip away from the mountains toward the Big Horn River.  At Thermopolis a large fold, with a crest fault, appears and bring the Paleozoic rocks to the surface and the water is released under pressure.  The solution conduits of the Madison Limestone are thought to be the major source of the water.  The next major question involves the source of the heat.  Most thermal springs are related to either water heated at great depths in the earth’s surface, or heat generated from nearby igneous activity.  At Thermopolis “the water has become heated because it has circulated to great depths” (Whitehead, 1996).
Thermopolis is a great little town to visit and I plan on going back and “taking to the waters”.  The price is right---free at Hot Springs State Park!  In addition, the Wyoming Dinosaur Center in town is an interesting museum, and the nearby Wind River Canyon has some spectacular geologic outcrops.