The vanadates are among my favorite group of minerals, and along with the phosphates and arsenates, are usually grouped and studied together.  In these three groups, arsenic (As) or phosphorous (P) or vanadium (V) combine with oxygen (O) to from the arsenate (AsO4), phosphate (PO4) and vanadate (VO4) radicals.  Each of these radicals, with a negative charge of 3-  then combines with a positive charged cation metal(s), and often with water (H2O) or hydroxide (OH), to form a wide variety of minerals.  Since the three radicals are approximately the same size they often substitute for one another in a solid solution series.  For example, pyromorphite [lead phosphate [Pb5(PO4)3Cl] is in solid solution with mimetite [lead arsenate Pb5(AsO4)3Cl]---the negatively charged radicals change.  The latter mineral is usually a pale yellow to yellow-brown color while pyromorphite is usually green to yellow-green in color; however, intermediate stages in the solid solution series are known (from work with XRD or EDS or other gizmos).  Each of these radical groups may also combine with a variety of metals (cations with a positive charge) that often form solid solution series with each other.  For example, erythrite [cobalt arsenate] is in a complete solid solution series with annabergite [nickel arsenate] as the cobalt cation substitutes for the nickel cation: Co3(AsO4)2-8(H20) to Ni3(AsO4)2-8(H20). Therefore, it is easy to understand the wide range, number and variety of arsenate, phosphate and vanadate minerals when so many combinations of cations and radicals are possible.

Many arsenate—phosphate—vanadate minerals are bright in color, have easily observable crystals and are widely available at mineral shows.  Therefore, I am a sucker, actually a buyer, whenever these minerals are located at shows (if the price is right)!

The arsenates and the phosphates are well known minerals such as copper arsenates: olivenite and clinoclase and cornwallite; and copper, zinc arsenate: austinite; cobalt arsenate: erythrite; lead arsenate: mimetite; and nickel arsenate: annabergite.  The phosphates include such minerals as calcium phosphate: apatite group; lead phosphate: pyromorphite; lithium phosphate: triphylite and amblygonite; copper aluminum phosphate: turquoise; and the rare-earth phosphates: monazite and xenotime.
The vanadates are not nearly as well know, or as common, as the previous groups but do include carnotite, a uranium vanadate; mottramite and descloizite, copper-rich and zinc-rich vanadates forming a solid solution series; and the best known of the group, vanadinite, the red to orange lead mineral with beautiful and collectible hexagonal crystals.

At the 2016 Tucson Show I was rummaging through some minerals at Shannon and Sons toward closing time and came upon a specimen of pottsite.  Normally I would have known little about this strange mineral except I had been reading about minerals containing bismuth (Bi).  Pottsite is a quite rare hydrated (H2O) lead and bismuth vanadate [(Pb3Bi)Bi(VO4)4-H2O] found in the oxide zones of tungsten-bearing rocks.  MinDat noted that pottsite is the only natural lead-bismuth vanadate known.  The Pb/Bi ratio varies from0.86 to 1.48. At the rock and mineral shows that I frequent pottsite is not a common mineral for sale as the mineral has only been found in four localities (MinDat): Cordoba, Argentina; Bavaria, Germany; and Nevada, USA (Churchill and Lander counties).  It seems as most of the collected specimens come from the type locality, the Linka (AKA Garnetite) Mine, Spencer Hot Springs District in Lander County.  The major target at the Linka was tungsten with slight recovery of copper and molybdenum.  Sherlock and others (1996) defined the Spencer Hot Springs District as a “Tungsten Skarn” where scheelite-bearing [calcium tungstate], calc-silicate rocks are formed at boundaries of hot magma bodies (a granodiorite at Linka) and carbonate rocks.  The hot fluids dissolve some of the carbonate rocks (a process of metamorphism called metasomatism) and deposit a wide variety of minerals dependent upon the composition of the hydrothermal fluid.  Evidently at the Spencer Hots Springs District, tungsten was a major component of the fluids along with secondary? lead, vanadium and bismuth.  I remain uncertain as to the rareness of combining lead and bismuth.
Pottsite occurs as a bright yellow, almost druse, of microscopic (usually submillimeter) prismatic crystals (Tetragonal), or as stubby prisms or bipyramids.  They appear to be translucent to transparent and are soft at ~3.5 (Mohs). 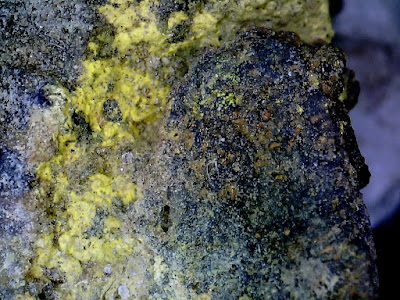 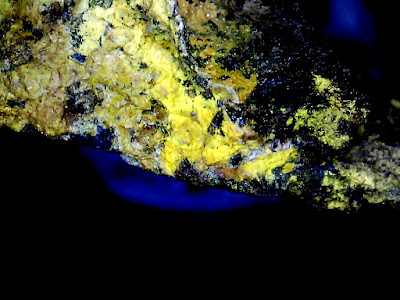 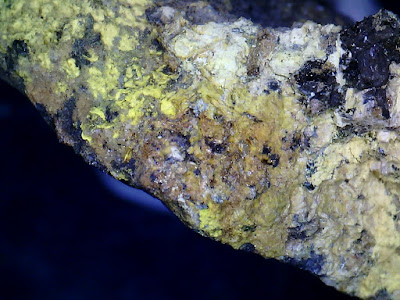 The mineralization process concluding with the formation of pottsite is a complex sequence of events.  Williams (1988), in describing this new mineral, pointed out:  Pottsite is a product of oxidation that followed these events [late metamorphism]. Junoite [copper lead bismuth sulfide] was first replaced by waxy green Bismutite [bismuth carbonate] streaked with grey cerussite [lead carbonate]; the green bismutite then lost copper and became chalky white. Typically the bismutite was then converted to a powdery orange (unknown) bismuth vanadate which, in turn was replaced by clinobisvanite [bismuth vanadate]. Sparkling crusts of this mineral are commonplace in fractures anywhere close to oxidized junoite. In a few spots pottsite has replaced the unknown bismuth vanadate instead of clinobisvanite. It does not occur in association with clinobisvanite.
I originally thought that perhaps some orange material in the small sample was clinobisvanite (BiVO4).  However, I could not locate any fluorescence in the specimen---any indicator of clinobisvanite.  I also remain somewhat confused (not all that difficult) with the statement by Williams (1988): It [pottsite] does not occur in association with clinobisvanite.  My confusion relates to photos on MinDat showing specimens with both minerals present.  Perhaps new studies since 1988 have shown both minerals may be found together?  One of life’s persistent questions!

Speaking of those questions:  Life’s most persistent and urgent question is “What are you doing for others?”
Martin Luther King, Jr.