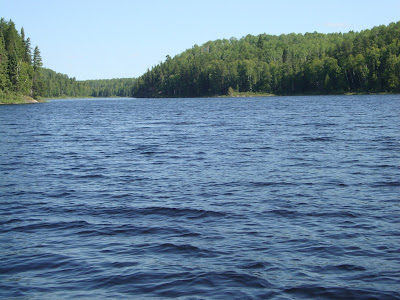 Joys come from simple and natural things; mist over meadows, sunlight on leaves, the path of the moon over water. Even rain and wind and stormy clouds bring joy.

I often “daydream” as I write since remembrances of my past help me to contemplate the present, and brings joy to my life.  I may not remember where my truck keys are stored but have very sharp recollections of my time spent in the wilderness waters of northern Minnesota: As long as there are young men with the light of adventure in their eyes or a touch of wildness in their souls, rapids will be run.

A “long time ago” I satisfied two great personal “loves” by combining both teaching geology and canoeing in an outdoor classroom.  My first classes were held on the Current River in southern Missouri, a newly designated National Scenic Riverway (the first in the nation).  While interesting, it was not the wilderness area that I craved.   So, the next few years I moved to the Boundary Waters Canoe Area Wilderness (BWCA) in northern Minnesota headquartered in Ely.  At that time the great author, environmentalist and strong advocate for the protection of wilderness was still alive and living in Ely---Sigurd Olson (1899-1982).  I had devoured, several times, all of his books and still bring out The Singing Wilderness (a signed copy) for a yearly reading.  I figured that a man who took his wife canoeing on their honeymoon was my kind of hero, and Mrs. Olson was my picture of a strong spouse and partner. I did not take my wife canoeing on our honeymoon (the two days that it was—no money) but not long after I had her carrying packs over the portage trails in the BWCA.  Again, a strong spouse and partner.

I bring this up since the writings of Olson often just flow across my mind and present vivid pictures: The mist was all gone from the river now and the rapids sparkled and sang. Sometimes today the words associated with geology just sort off spin off my tongue and flow across my mind with vivid pictures: Ajax, Black Dragon, Black Jack Empire, Boss Tweed, Bullion Beck, Carissa, Eureka Hill, War Eagle, Scotta, Uncle Sam, Opoltonga, Humbug, May Day, Godiva, Sunbeam.  All of these locations, plus many others, are mines in the greater Tintic District in Juab and Utah counties in the central part of the state. I have not seen most Tintic mines but never-the-less can picture them in my mind and wonder about the names.  Was the “boss” of Tammany Hall, William Tweed, investing in Utah Mines?  Or was the mine owner or foreman an admiring Democrat? Did some miner hit a rich vein and yell Eureka?  Did a mine tunnel collapse and someone yelled Mayday?  Those are some of life’s persistent questions.
The Tintic District is located about 50 miles south-southeast of Salt Lake City on the west central slope of the East Tintic Mountains.  The mountains are part of the Basin and Range Physiographic Province and connect the Oquirrh Mountains to the north (also Basin and Range mountains and the range visible directly to the west of Salt Lake City) and the Canyon Range to the south.
The Tintic Mining District was discovered in ~1869 and its geology/mineralogy was summarized by Wilson (1995) who noted the presence of ~175 species of minerals…”Much of the production of siliceous ore in the district [was] utilized by smelters in Tooele and Salt Lake City to mix with more iron-rich ores of Bingham.  Tintic has produced gold, silver, lead, copper, iron and zinc as its major commodities.”  Morris (1968) noted the primary ores consisted of “sulfides and sulfosalts of silver, lead, copper, iron, zinc and bismuth in association with jasperoid (silicified carbonate rock), barite, aggregates of quartz crystals, calcite, dolomite, and ankerite…gold is locally common…”

The geology of the Mining District is related to several large volcanoes that erupted in the Tintic area (and much of western Utah) during the early Oligocene (Hintze and Kowallis, 2009) and covered Paleozoic rocks that were folded and faulted by an earlier mountain building event termed the Sevier Orogeny (Cretaceous).  During the later Oligocene, these volcanoes begin collapsing and large calderas formed.  The hydrothermal solutions associated with the volcanics followed the cracks and faults in the Paleozoic rocks and helped dissolve portions of the limestones.  As these solutions cooled the minerals begin to crystallize forming the ore bodies in the limestone.

Although the Tintic mines currently are closed (although many are under claim), their total mineral production, about 20 million tons, would translate into about three billion dollars (2006 dollars).  The most valuable metals were silver (~42%), gold (29%), lead (17%), copper (~6%) and zinc (~6%).  Production peaked in the first half of the 2oth Century and finally ceased with the 2002 closing of the Trixie Mine (Krahulec and Briggs, 2006).   For a great history of the mine transportation network check out Railroads and Mining at Tintic at www.utahrails.net.

One of the smaller mines in the District is the Carissa, a mine found on the slope of Mammoth Peak, home of the well-known Mammoth Mine.  It was connected by a tunnel to its more productive neighbor the Northern Spy Mine. Carissa may not have been a large gold-silver producer; however, it was later (years?) a specimen producer of very nice crystals of the arsenates adamite [(Zn,Cu)2AsO4OH], conichalcite  [(CaCuAsO4(OH)], mimetite [Pb5(AsO4)3Cl], olivenite [CuAsO4(OH)], mixite [Cu6Bi(AsO4)3(OH)6-3H2O)] and the copper carbonates rosasite and azurite.  All of these minerals are secondary and found in the oxidation zone where primary lead (argentiferous galena), zinc (hemimorphite?), bismuth (bismuth) and copper (copper, cuprite, enargite) were present.  The enargite could also have provided the arsenic for the arsenate (AsO4) ion with a charge of Minus 3.

In an arsenate ion, individual arsenic atoms are surrounded by four oxygen atoms that form a strongly-bonded group that are linked together by weaker bonds involving the metal cations plus the hydroxyl ion (OH) and the water molecule (H2O).  For example, in mixite the metal cations are bismuth and copper. In the agardite series (five minerals of the Mixite Group), there are numerous Rare Earth Elements (REE) serving as cations.

The most interesting specimen mineral collected from the Carissa, as least to me, is the rare copper bismuth arsenate named mixite.  Essentially a micromineral, mixite occurs as very tiny, slender acicular needles that often congregate together in tuffs or radial sprays. Although the crystals are usually some shade of green to blue-green, occasionally they are white to light blue.  Individuals appear to have an adamantine luster although this is a difficult call. The tuffs are more silky in nature. Crystals belong to the Hexagonal System and appear to be translucent to transparent.  Hardness is listed as 3.5-4 although that is tough for me to determine. 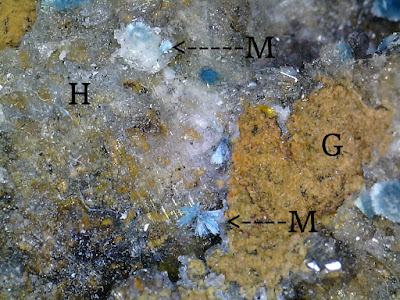 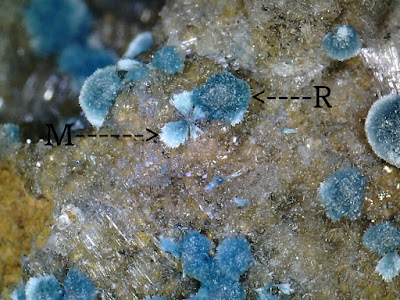 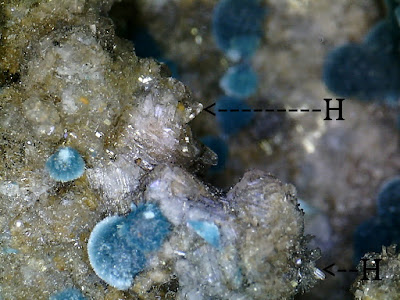 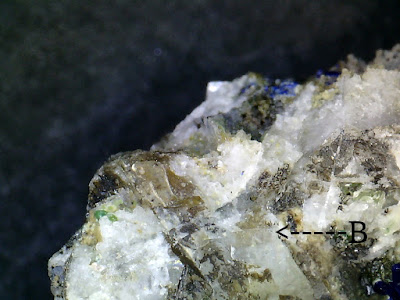 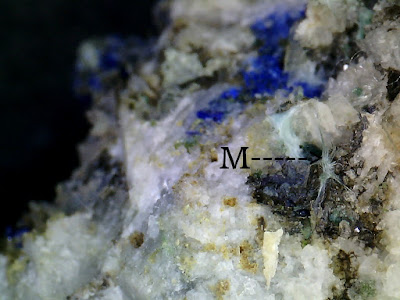 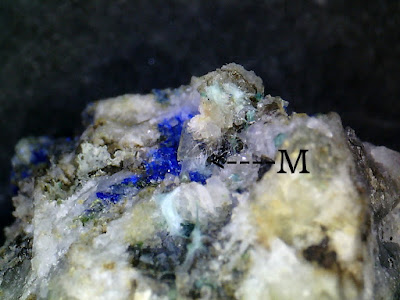 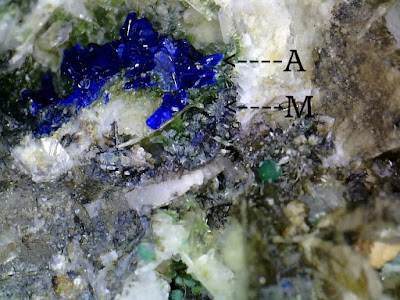 Mixite is the namesake of the Mixite Group, as assemblage of about a dozen arsenates or phosphates containing hydroxyl ions and water molecules but with different cations--all look similar and are difficult to distinguish between. I know my specimens from the Carissa Mine are mixite since they have been identified by X-Ray Diffraction (XRD) methods.
How often we speak of the great silences of the wilderness and of the importance of preserving them and the wonder and peace to be found there. When I think of them, I see the lakes and rivers of the North, the muskegs and expenses of tundra, the barren lands beyond all roads. I see the mountain ranges of the West and the high, rolling ridges of the Appalacians. I picture the deserts of the Southwest and their brilliant panoramas of color, the impenetrable swamp lands of the South. They will always be there and their beauty may not change, but should their silences be broken, they will never be the same.