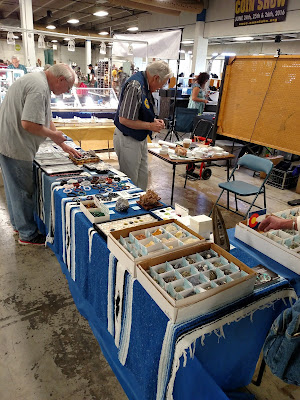 As noted in the previous Post, the CSMS annual Show was a huge success with a large number of vendors, great display cases, and numerous satisfied visitors.  After visiting Tucson in February, and locating several blue-colored minerals (Show theme was Shades of Blue), I was now on the lookout at the CSMS show for additional blue minerals that were out of my price range in Arizona.  Much to my surprise I was able to pick up small specimens of boleite and diaboleite; both minerals are complex halides rather uncommon in the rock record.


Boleite [KPb26Ag9Cu24(OH)48Cl62] has been known since the early 1890s but was not well understood until the late 20th century with the advent of sophisticated instrumentation.  The discovery locality, the Boleo Copper District located in Baja California Sur, Mexico, near the town of Santa Rosalia, has been the site of major sulfide mining (open pit until the 1980s) and at one time (at least in the 1950s) was the second largest producer of copper in Mexico (Wilson and Rocha, 1955). Underground mining started in 2012 with the first production in 2014 and I presume mining is still active.   As best I can decipher, the copper deposits are in an uplifted belt of Neogene (Miocene or Pliocene) rocks within the El Boleo Formation (deltaic and near-shore marine claystone-siltstone-sandstone beds).  The major sulfide ore minerals are chalcocite (Cu2S) accompanied by chalcopyrite (CuFeS2), bornite (Cu5FeS4), covellite (CuS), and native copper (Cu).  The oxidized zone (above the sulfide deposits) has a large variety of copper oxides, copper carbonates, copper silicates, manganese oxides, and rare halide minerals such as boleite, pseudoboleite, and cumengite.  The Boleo deposits are the type locality of the latter three halide minerals. The productive ore contains rather large amounts of copper, manganese, zinc, cobalt, lead, and silver; however, few minerals except copper were produced in commercial quantities.  Evidently the hydrothermal solutions traveling through the underlying Comondu volcanics (Miocene?) from even older (?Cretaceous) intrusive igneous rocks ( a quartz monzonite) carried metallic elements upwards in fractures and faults before depositing the sulfide ores in sedimentary rocks and sediments of the El Boleo Formation.  (above geological information from Wilson and Rocha, 1955).  The mineral deposits at Boleo are termed epigenetic since they formed after deposition of the host rocks.  Syngenetic would indicate deposition of mineral deposits simultaneously with deposition of the host rocks


The Boleo ores are interesting in that they are a Manto ore deposit.  These deposits are usually polymetallic in nature and form sheet-like bodies along bedding planes of sedimentary rocks.  The hydrothermal, metal-bearing solutions circulating off nearby igneous rocks (usually intrusive) supply the ore minerals. The types of primary sulfide minerals vary with the composition of the hydrothermal solutions.  Evidently the hydrothermal solutions at Boleo were rich in lead, copper, silver and a few other metals.  Oxidation and weathering of some sulfides allowed for the formation of the many colorful oxides, chlorides and carbonates.  MinDat lists 68 different minerals collected from the Boleo deposits.


So, the metals in the hydrothermal solutions are cations, positively charged molecules with more protons than electrons.  The metallic elements have a neutral charge but they emit electrons and lose their neutrality (and become  cations).  Chloride (Cl) is a negatively charged (more electrons than proton) anion (the anion of the neutrally charged element chlorine).  Cations, such as the lead, copper and silver in boleite are attracted to, and bond with, the negatively charged chloride anion. [KPb26Ag9Cu24(OH)48Cl62]---I understand that concept.  But my question is---what is the source of the chloride in boleite?  Was it in the original hydrothermal solution, or was it completely secondary?  My guess, and this really is above my pay grade, is the chloride came from the host marine rocks and not from the original hydrothermal solution. I say this since MinDat notes that boleite also forms, rarely, when smelter slags are immersed in, and leached by, seawater (contains NaCl).  Boy, where are my mineralogy/petrology/ore genesis friends?  Whatever, chloride reacted with the sulfides and like magic----boleite and other halides.


Well, the above paragraph took a couple or three hours to write and I am not certain the sentences are correct.  I blame this lack of understanding on: 1) college chemistry befuddled my 18-19-year-old mind; 2) my first year in college was paid for by a basketball scholarship and that aspect was foremost in my thoughts; and 3) after struggling through those confusing chemistry courses I switched to geology and paleontology and as the saying goes, “found my niche.”  Now 50+ years later I am trying to relearn some basic chemistry---lifelong learning at its best! But this learning is tough, about like when I tried to master the German language ten years ago.  Well, not really master it but just try for some basic understanding.  I sort of achieved that aspect since I could order dark beer (dunkles Bier), bread (brot), sausage (wurst) and especially pig knuckles (schweinehaxen), as well as read the train schedules.  What more does one need in Germany?  I am still working on the chemistry aspect!


OK, so boleite is one of those uncommon hydroxyhalides (chlorine is cataloged into the Halide Group of elements) and the chemical formula [KPb26Ag9Cu24(OH)48Cl62] shows the presence of a hydroxide ion (OH). Crystals have a beautiful indigo to prussian blue color; however, the color often appears much darker when examining a complete crystal in reflected light. It has a vitreous to pearly luster and is fairly soft (3.0-3.5 Mohs).  Thin pieces are transparent but larger crystal pieces appear opaque or at least translucent.  The powered form, streak, is a greenish-blue color.  Boleite belongs to the Isomorphic Crystal System and crystals are cubes although they commonly are twinned (Interpenetration Twinning) or have epitaxial pseudoboleite [Pb31Cu24Cl62(OH)48] or cumengite [Pb21Cu20Cl42(OH)40-6H2O].


Most boleite specimens on the market today come from the Boleo District and many/most seem to be floaters; crystals scattered over a matrix are rare and expensive.  According to one prospector/vendor I talked to in Tucson, boleite crystals of any kind are getting rather scarce.  In the U.S. the best-known boleite crystals are from the Mammoth-St. Anthony mine northeast of Tucson.


Speaking of Mammoth-St. Anthony, the specimen of diaboleite purchased at the Show is from this famous Arizona mine.  Diaboleite is also a hydroxyhalide [Pb2CuCl2(OH)4] with lead and copper as the cations along with a chloride anion.  It forms in a similar environment as boleite, in the secondary zone of copper-lead deposits, and at times is found in association with boleite.  Diaboleite is also blue in color that seems not as intense (the prussian blue) as boleite.  It is quite soft (2.5 Mohs), crystals have a vitreous luster and are more transparent than boleite.  The streak is about the same as boleite but seems a little greener.  The major difference between the two minerals is that diaboleite belongs to the Tetragonal Crystal System and produces crystals that are tabular although specimens are often a mixture of nice crystals and very tiny granular crystals packed together.


So again the question about the chloride ions!  Humphreys and others (1980) noted that “halide salts are generally soluble in water, which explains why halide minerals of the transition elements are usually absent from the vicinity of oxidizing orebodies. In such an environment low pH values also tend to facilitate the solution of most species. Nevertheless, many halide minerals are known and occur in considerable quantities at some localities. Two groups of halide minerals containing Cu(II) and Pb(II) are outstanding in their complexity and rarity. These are the boleite group…and diaboleite [+others]… These…minerals are thus apparently confined to systems where the availability of chloride ions is very high.”  They furthermore observed these oxyhalides and hydroxyhalides can only form from aqueous solutions as secondary minerals.  As to why specific oxyhalides or hydroxyhalide minerals form, Humphry and others (1980) and Ardul-Samad and others (1981) conducted a number of solution studies and constructed Stability Field Diagrams that indicate the parameters (especially pH) needed for deposition of these specific copper chloride minerals.  As to the origin of the chloride, Ardul-Samad and others (1982) stated that the minerals occurring at Mammoth-St. Anthony are “an extremely complex assemblage in the oxidized zone of a base-metal orebody…a diverse and complicated inorganic chemistry must have been responsible for the formation of the compounds…”  I presume this latter statement could also apply to the Boleo Copper District.


In my discussion of boleite, I suggested that perhaps the chloride in the oxidized zone came from the host marine rocks/sediments but that was sort of a guess from a non-mineralogist!  I am still looking for an answer; however, Frost and others (2003) noted that “several chloride minerals of the base metals is known from oxidised zones, especially those located in arid areas, or those which are associated with saline ground waters.”   I presume, but again a guess, that the chloride in the “saline ground waters” came from ground water percolating through the host rocks/sediments!