THE 2016 RMFMS MEETING: THE NITTY GRITTY 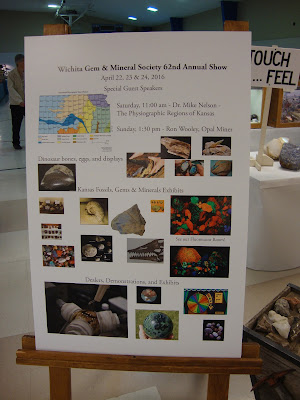 Welcome to the Show, the annual meeting of the Rocky Mountain Federation of Mineralogical Societies (RMFMS) hosted by the Wichita Gem and Mineral Society.  The combined meetings featured vendors, competitive and non-competitive display cases, demonstrations by skilled lapidaries, lectures, lunches and banquets, Federation business activities, and meeting new and previous friends.  See previous posting on driving directions to the city. 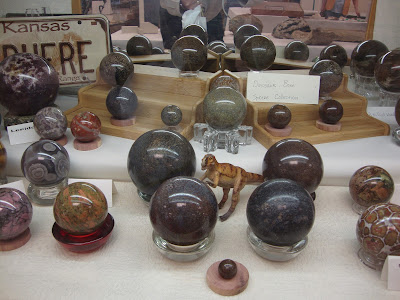 Late Saturday morning I presented a talk to a variety of show attendees entitled:  Geology and Physiography of Kansas; Collecting Minerals and Fossils.  On Sunday afternoon Ron Wooley, an opal miner, talked about his experiences collecting opals in Australia.

The RMFMS House of Delegates Meeting occupied much of Saturday afternoon and was fairly routine.  A large number of Federation clubs sent delegates, something like 35.  President Matt Charsky represented the American Federation of Mineralogical Societies and offered greetings from the Federation office. President Jaeger (RMFMS) noted that a large number of members (many committee chairs) are serving the Federation for the first time.  Secretary Thomas received reports from 40 committee chairs and officers, possibly a record! Treasurer Maggard reported the Federation ended FY 2014-15 with 78 member clubs and a total membership of 9,014 members—an increase of 623 members over FY 2013-14. The Federation added one new club, the Daisy Mountain Rock and Mineral Club of Anthem, Arizona (northern suburb of Phoenix).  In FY 2015-16 the Federation also added the Apache Junction Rock and Gem Club (eastern Phoenix suburb), and its 230 members.  The Federation has lost the Arizona Leaverites Club (Phoenix) and the Chanute Gem and Mineral Society (Kansas).  However, for this FY the Federation has gained over 700 new members!  In addition, the RMFMS donated $1,764 to the American Federation scholarship fund.

The Long Range Planning Committee submitted “tens of pages” of revisions and updates to the Federation’s Operating Procedures.  This project started three years ago when I chaired a small committee (with Betty Cain) to offer suggestions and we turned in our report two years ago at the Tulsa meeting.  The Committee’s report was accepted by the Delegates.

The Delegates offered a round of applause to Alice LaBonte for her editorial leadership of the Federation Newsletter.  And, after a number of other rather ordinary reports, President Jaeger noted the upcoming banquet and the Sunday morning PLAC meeting and then adjourned the convocation.

The Saturday night banquet had some fairly tasty food, compared to most other hotel food events that I have attended!  However, the highlight of the evening was the introduction of Dr. Forest Sawyer, the winner of the AFMS-sponsored scholarship for 2016.  Dr. Sawyer teaches at the South Dakota School of Mines and Technology in Rapid City and will use his award to fund two, $4000 scholarships for Tech graduate students.  I found it sort of serendipitous that Dr. Sawyer’s dissertation advisor is a very good friend of mine, and a member of his graduate committee was my graduate school roommate. Sometimes it seems like a small world!

On Sunday morning I convened a meeting of the Public Lands Access Committee (PLAC) chairs and interested visitors.  Major discussions centered on: 1) USFS and BLM rules on collecting invertebrate fossils; 2) the creation of many new Wilderness Study Areas (WSA) and Wilderness Areas (WA); and 3) the road closures on large tracts of USFS land.

As the PLAC Chair for the last year, my major interest has been the implementation of new USFS collecting regulations for invertebrate fossils.  Although I disagree with many of the individual regulations, it behooves Federation members to try and work with their local USFS leaders.  Keep in contact with the local offices, and “know” the regulations.

The future, maybe within the next year, will bring draft collecting rules and regulations from the Bureau of Land Management (BLM).  PLAC state directors will need to muster club members to take action (individual letters and comments) if BLM draft regulations are as strict as the USFS rules.  The drafts will be published in the Federal Register and I will try and monitor such in order to notify state directors.

Other states, especially New Mexico and Wyoming, also have a variety of problems associated with road closures and proposed WSA/WA.  Their directors are working hard to try and ameliorate the situations.
In summary, the Wichita club had a great show and thousands of people attended. Show Chair Gene (and I am certain assisted by spouse Peggy) rounded up an amazing number of Show workers and is to be congratulated.  Pat and Mary constructed Delegate gift bags and table favors that were quite unique and impressive and will be remembered by recipients for many years.  President Jaeger and his officers have pulled the Federation out of the doldrums and a major slump and we now have a bright future. 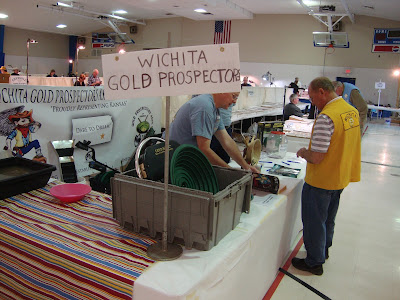 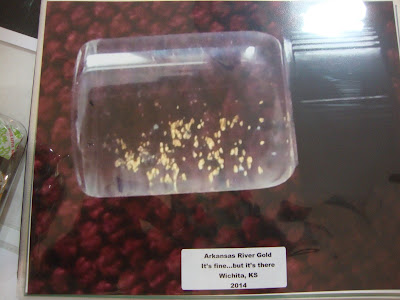 I was curious about a gold prospecting club in Kansas so stopped in for a visit.  Where do you collect gold in Kansas?  Why right in downtown Wichita!
Posted by Mike at 8:04 PM No comments:


The annual convention of the Rocky Mountain Federation of Mineralogical Societies (April 22, 23, 24 2016) was hosted by the Wichita Gem and Mineral Society at their 62nd Annual Show.  Thursday the 22nd was designated as “student day” and over 600 students “field tripped” to the Show and were treated to a variety of student-orientated activities.  I was quite impressed with the sheer numbers of children attending the three-day show and their fascination with the “touch & feel,” “rock pile,” “gem wheel,” and “grab bags.”  What a tremendous way to help create future rockhounds.  I also noticed that several dealers had colorful specimens priced so that children could afford to purchase their “very own” mineral or fossil.
In wandering to Wichita, I wanted to stay away from the Interstate System, especially I-70 from Limon, Colorado, on east to Hays, Kansas.  It seems as though I have traveled that stretch a thousand times; therefore, I often just wander through the countryside.  On this trip I traveled south from Colorado Springs to Pueblo on I-25 on the far western reaches of the Colorado Piedmont Physiographic Province (mostly through the Pierre Shale).  At Pueblo I picked up U.S. 50 and the Arkansas River and headed east to Kansas.  The entire ride to the boundary of my home state was in the lowlands where the Arkansas River has excavated a major channel through the Cretaceous Rocks of the Colorado Piedmont.

The Arkansas River in Colorado is an amazing and diverse river.  Heading near Leadville between the Sawatch and Mosquito ranges, the stream flows south in the Rio Grande Rift Zone, an extensional feature (spreading) extending from Mexico through west Texas, central New Mexico, into the San Luis Valley of Colorado and finally north to Leadville and beyond.  However, near Salida the River abruptly turns east cutting major canyons, such as the Royal Gorge, before emerging near Pueblo.  What happened?  As I understand the situation, the Arkansas once continued south flowing into, and through, the San Luis Valley (in the Rift Zone).  But, a major extrusive eruption of volcanic rocks, maybe 3 Ma., blocked the river south of Salida/Poncha Springs and forced the stream to flow east.  Fascinating!
At the state line I continued along U.S 50 and the River in what Kansas calls the Arkansas River Lowlands where the excavation has been in the Tertiary and Cretaceous rocks of the High Plains Physiographic Province. About four miles into Kansas I was greeting by flashing red lights and first thought Wichita Gem and Mineral Society had sent a welcoming committee. Alas, it was just a friendly member of the Kansas Highway Patrol questioning my need for speed in heading to Wichita!

The River flows east through Garden City and Dodge City and then does a “strange” thing---it makes a large turn to the northeast, the “Great Bend” of the Arkansas River.”  This feature was noted by Europeans as early as 1541 when that Spanish treasure hunter, Francisco Vázquez de Coronado y Luján, tromped through the area.  After traveling about 70 miles to the northeast, the River does a “strange” thing and turns back to the southeast and heads 70 miles to Wichita.  There it flows south into Oklahoma and ultimately east to its final destination, the Mississippi River in southeastern Arkansas.
At 1469 miles, the River is the 6th longest in the U.S. As for the “Great Bend,” I was unable to find a concrete answer as to “why.” In my graduate school days, many years ago, we speculated that some sort of feature in the basement Precambrian rocks was responsible for the Bend.  I suppose that may be as good an answer as any!

In cutting across the “Great Bend” of the River I traveled on U.S 54 across some nondescript parts of the High Plains including Quaternary loess deposits, lowlands of the Ninnescah River, sand dunes, and a few Permian redbeds before reaching the lowlands of the Arkansas at Wichita.

What a difference a day makes, as the old crooning goes!  The following photos are a day apart (of driving) and represent the extremes of river valleys.

And finally, growing up in Kansas we knew the river as the ar-KAN-zes.  Later in life I learned the rest of the world called it the AR-kan-saw!