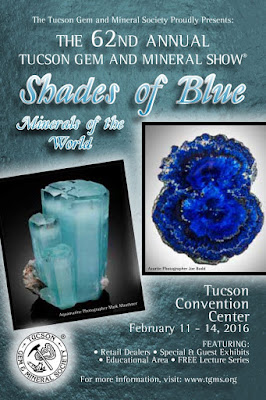 Well, the big day finally arrived---the opening of the 62nd Annual Tucson Gem and Mineral Show.  I was in line early on opening day, the 11th of February.  The theme of the 2016 show was Shades of Blue: Minerals of the World.  I was guessing the displays would include a variety of sapphires, topaz, fluorite, and azurite.  As it turned out, that was a pretty good estimate; however, I did not use up much brain power with that pronouncement! Much of the “fun” at the Tucson Show always includes the innovative names for the display cases.  The “Shades of Blue” theme brought out such titles as: The Birth of the Blues, Rhapsody in Blue, Shades of Blue, It’s a Blue, Blue, Blue World, Maine’s Got the Blues, Colorado Blues, Blue Minerals of the World, Blue Hues from Arizona, Mother Nature Sings the Blues, Arizona Type Blues, and the rather mundane Azurite from Russia.  Of course my favorite case was displayed by Jack and Kaye Thompson direct from the Colorado Springs Mineralogical Society.

During most visits to the Show I find very few minerals within my purchasing budget.  I usually come home with a specimen or two but attend the Show mostly to see the fantastic display cases filled with minerals, and to ogle at the “for sale” minerals often priced at many tens of thousands of dollars.  Everything about the Show is exciting.