If I were to quiz 10 rockhounds of the CSMS and ask them to name the two most “famous” agate types in the United States I suspect nine of them would list Lake Superior Agates and Fairburn Agates; I would agree.  I first started looking for Fairburn Agates in South Dakota back when I was chasing fossils in 1966 for some of my research.  In those long ago days the agates were not common, but were still available to the intrepid explorer willing to tramp around the exposures.  I have a nice specimen collected in 1966, could not locate one during a hunt in 2009, but was again successful last summer. 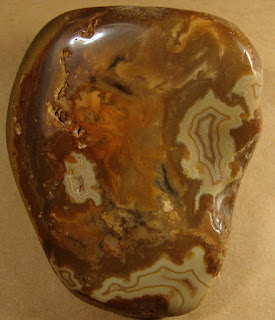 Fairburns are valued for their colorful fortification patterns with an abundance of reds (iron oxide), oranges (iron oxide) and blacks (manganese oxides).  The derivation of their name comes from the small community of Fairburn, located south along I-90, ~25 miles, of Rapid City near SD 79.  This area is also perhaps the easiest for collectors to locate.  Agate hunters should travel east from Fairburn along French Creek Road (good gravel road) for about 12 miles to a sign locating the original collecting area managed by the Buffalo Gap National Grasslands.  Although known to collectors for decades, these Fairburn beds still yield an occasional agate, and as many colorful specimens of jasper, quartz and chalcedony as can be carried out in your collecting bag.
The geology at the collecting site is as interesting as the specimens.  French Creek has eroded the area and exposed the Cretaceous Pierre Shale, the Chamberlain Pass Formation (Eocene) and Eocene/Oligocene White River Group (mostly the Chadron Formation), and Tertiary terrace gravels.  Rocks of the White River Group are famous for producing mammals in Badlands National Park to the northeast of the beds.  However, rockhounds also will notice very distinct red-orange-yellow “beds” between the Pierre and the Chadron.  Originally named the Interior beds (for exposures near the village of Interior, SD), this “bed” is now known to be a series of ancient soils developed on the Pierre (mostly yellowish in color) and the overlying Chamberlain Pass (at least the upper part of the Chamberlain Pass has a red ancient soil imprinted).  These soils most likely developed in  tropical-like climates (warm and wet) but perhaps alternated with dryer periods.
The really interesting story about the Fairburns involves their relationship with the Teepee Canyon Agates in the Black Hills.  This latter agate site, in limy beds of the Paleozoic Minnelusa Formation, is located west of Custer, SD, along US 16 about two miles west of Jewel Cave National Monument, or perhaps 14 miles from Custer.  Most geologists now believe that the Minnelusa Formation in the Black Hills is the source of the Fairburn Agates and the siliceous pebbles were transported out to the plains by Tertiary streams draining the Hills.  Pabian (Agates Database: www.snr.unl.edu) noted that conglomerate beds in the lower part of the Chamberlain Pass Formation are the source of the Fairburn agates at their "type locality"---the original Fairburn beds.  However, most people associate Fairburn Agates with the Chadron Formation stratigraphically above the Chamberlain Pass Formation.  Hunters locate agates in situ in Chadron conglomerates, and in the lag gravels covering many outcrops where the finer sediments have eroded away leaving behind a veneer of pebbles (including agates). I remain uncertain if I can distinguish between the Chamberlain Pass and Chadron formations so perhaps agates come from both units.  In addition, I have seen Fairburn-type agates collected from the late Cenozoic “high level” terrace gravels, and beds attributed to the Ogallala Group and/or "Western Derived Gravels" (as distinguished on the State Geological Map of South Dakota).  Collecting localities for Fairburn agates seem to surround the Hills wherever the Chadron is exposed out on the Plains.The agates noted in the other gravels probably represent reworked sediments of the Chadron.
If you plan on collecting at Teepee Canyon the agate “diggings” are very evident since prospectors must quarry out large pieces of limestone and then break out the cherty nodules, some large and some small.  Large crack hammers, pry bars, leather gloves, and eye protection are required.  The agate localities, both in Teepee Canyon and next door in Hell Canyon, are located on USFS land and are open to collectors, at least were open during my last visit.
I would suggest that if you are interested in Fairburn Agates---pick up a book or three written by Roger Clark, the premier expert on the agates.  Book one is South Dakota's Fairburn Agate is only available on the used book circuit.  Book number two, Fairburn Agate: Gem of South Dakota, and number three,  Fairburn Agate: South Dakota State Gemstone are in print and published by Silverwind Agates.  The photos are just amazing.
ADDENDUM:  see the following blogs
Stumbling upon a Fairburn Agate:    8/19/12
Cracking rocks at Teepee Canyon:    8/18/12
A Fairburn Agate from Wyoming:    10/6/13
Posted by Mike at 8:08 PM 1 comment: