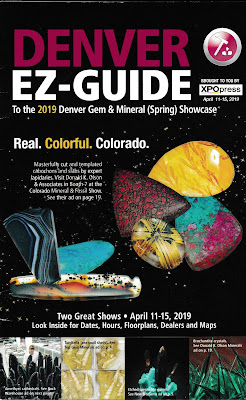 The Spring Denver Gem and Mineral Showcase is a nice compact show held at the Crowne Plaza DIA along I-70 in “north” Denver.  The Show houses all dealers in a single large ballroom plus three dealers in adjacent smaller rooms.  There were somewhere around 75-80 dealers, by my quick count, although 7 dealers were wholesale only and I could not get by the “guard” to investigate!  At any rate, there was not an admission fee, parking seemed reasonable, and it was easy to navigate around the ballroom.  I thought the variety of sellers was very good judged on the very few dealers offering amethyst cathedrals, beads, and Moroccan trilobites. 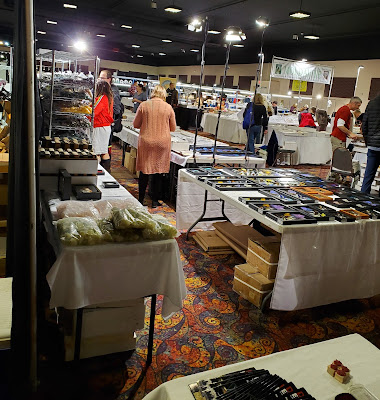 The main ballroom was well lite, and aisles allowed passage of disability chairs.  The tables were shallow enough to allow a good view of the selections. 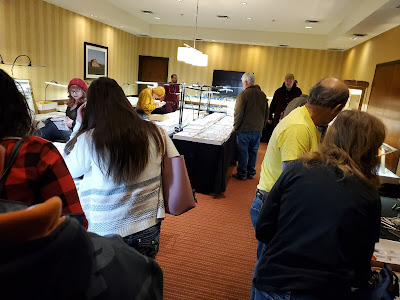 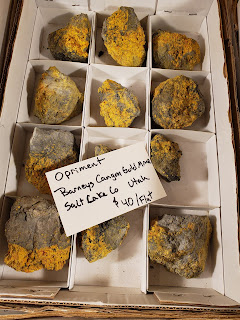 Three or four dealers were shuttled off to smaller rooms adjacent to the main hall.  This made for much confusion as many buyers were looking for the ever-popular Dan’s Used Rocks. 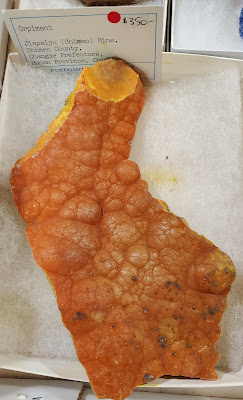 I thought the orpiment (arsenic sulfide) on the left was a nifty specimen, especially when compared to the “crumbly” specimens on the right.  Of course, there is a major difference in cost per piece. 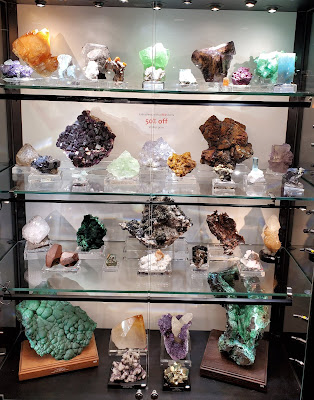 One could find specimens in all price ranges. 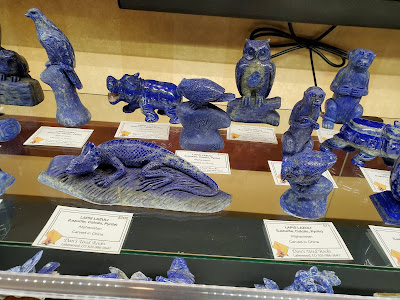 I thought the carved lapis animals different, but “cute.” 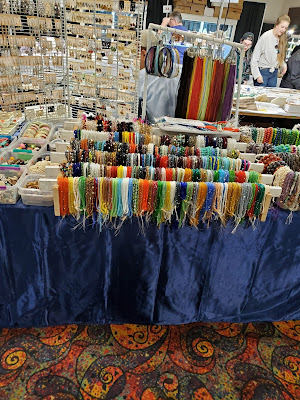 What would a rock and mineral show be without beads? 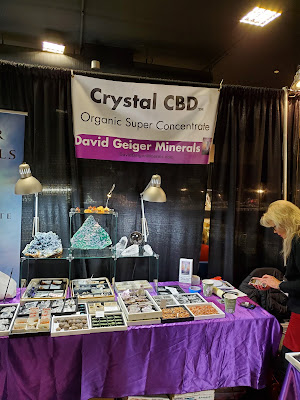 In answer to the above question, the Show could start accepting Cannabidiol sampling booths.  I presume this CBD came from hemp rather than marijuana although this is Colorado! 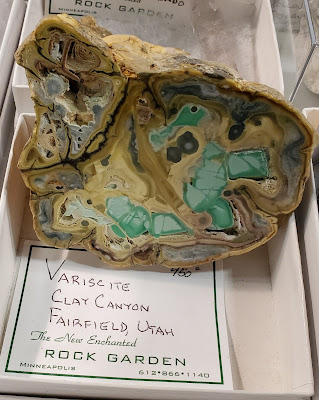 This was my favorite specimen at the show as I love these phosphate nodules from Clay Canyon in Utah.

I was able to pick up a few minerals of interest from the show vendors including a couple of sulfides and a carbonate.

One of the sulfides has bismuth as the positive cation and is bismuthinite [Bi2O3], a major ore of bismuth.  It is a very soft mineral [~2.5 Mohs], has a metallic luster with a lead gray to while color, and is opaque. The mineral crystalizes in the Orthorhombic System, but most specimens appear as long prismatic to slender acicular crystals that are often flexible.  With weathering an iridescent tarnish usually is noted.  The crystals are often mistaken for stibnite (Trigonal Crystal System) to which it is related via solid solution—the bismuth being replaced by antimony. In addition, bismuthinite form a series with aikinite, a lead, copper bismuth sulfide. Bismuthinite, from the famous mines in Bolivia, forms in high-temperature hydrothermal vein deposit or tourmaline-bearing copper veins associate with granite. 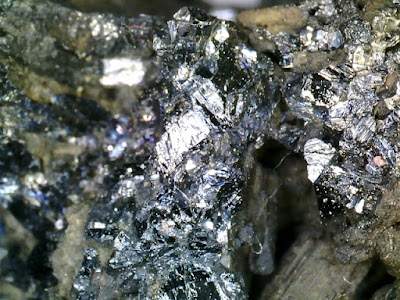 A carbonate, purchased at the Show, is somewhat scarce and is also a bismuth mineral:  Bi2(CO2)O2. Bismutite is an oxidation product of sulfide bismuth minerals such as bismuthinite.  My specimen came from Rio Arriba, County, New Mexico, where pegmatites have been mined (mostly for Rare Earth Elements and thorium) from granites of Precambrian age in the Pteaca District. I presume the bismutite is simply a non-important secondary mineral.

Bismutite is a pretty non-descript mineral, at least to me, as the luster ranges from vitreous to dull and the color yellow to black.  Most specimens I have observed, including mine, are yellow-tan earthy mats or plates without observable crystal structures.  However, it does have a gray streak and is quite soft ~3.0 Mohs).  Probably the only way that I might recognize bismutite would be to realize that the hypogene sulfide bismuthinite was present in the deposit.
Most bismuth used in industry comes from two sources: mining bismuth compounds, or as a byproduct of smelting other sulfides such as galena.  As for uses, most readers might recognize the anti-diarrhea medicine, Pepto Bismo (or one of its pink knockoffs).  Waterfowl hunters probably realize that bismuth (86% the density of lead) shot is a substitute for lead shot (to prevent lead poisoning).

Two of my other postings have described minerals containing bismuth: mixite March 19, 2017), and pottsite (February 6, 2017).

The second sulfide purchased was one completely unfamiliar but stumping me is not a real chore! At any rate dufrènoysite is an uncommon lead-arsenic-sulfide [Pb2As2S5] with a metallic luster and a dark lead or steel-gray to dark red-brown color. It has a highly vitreous to metallic luster, especially on cleaved or fractured (brittle, mostly conchoidal) surfaces, is fairly soft (~3.0 Mohs) and has a red-brown streak.  The crystals are often elongated, parallel and striated.  But one small concern--dufrènoysite belongs to the Sartorite Group (with ~ 25 other minerals) and is described as A group of chemically and structurally very complex sulphosalts which are impossible to identify visually.  So, I assume it is dufrènoysite; however, I do not have knowledge of the crystal chemistry nor do I have access to sophisticated equipment.

Sulfosalt minerals have a formula of AmBnSp where A represents a metal such as copper, lead, silver and iron; B represents a semi-metal like arsenic, antimony, or bismuth; S is sulfur. There is all sorts of substitutions by these metals and semi-metals.  For example, dufrènoysite, with arsenic, is in solid solution with veenite where antimony the major semi-metal.

The specimen was collected by Michael Shannon in 1967 from the Lengenbach Quarry near Vallis, Switzerland (in the Alps), that MinDat describes as a “world famous metamorphosed sulphosalt/sulfide deposit in sugary dolomite.”  The quarry has yielded an amazing number of minerals (141) with 39 of these minerals claiming Lengenbach as their Type Locality (including dufrènoysite and a similar jordanite [described July 28, 2016]).  As best that I can determine, the quarry wall rock was originally Triassic in age until metamorphosed during the late Cretaceous-Tertiary.  A later hydrothermal event produced a solution enriched in arsenic, antimony and bismuth and also deposited the resulting minerals no sooner than ~11 Ma.

I look forward to the many Denver fall shows running from around September 4 through September 15 at several building venues.  It is best to use an internet search engine for the latest information.