In my last Posting I continued to note that the phosphates (PO4), arsenates (AsO4), and vanadates (AsO4) are often grouped together since these three radicals are about the same atomic size and frequently substitute for each other when combining with metal cations.  In some case there is a solid solution series between resulting minerals such as mimetite (lead arsenate)—lead phosphate (pyromorphite)---vanadinite (lead vanadate).  In others, the minerals are individuals and no solution series seems to exist.

Erythrite, a hydrous cobalt arsenate, (see last Posting) is a member of the Vivianite Group of phosphates and arsenates defined (www.galleries.com) by the formula X3(AO4)2-8(H2O) where X is a ++ metal (Mg, Mn, Fe, Co, Ni, Cu, Zn) and A is either phosphorus (a phosphate) or arsenic (an arsenate).  Most members of the Group are colorful and have weak ionic bonding resulting in mica-like cleavage.  In the previous post I noted the bright green annabergite (nickel arsenate) and erythrite (crimson-red cobalt arsenate).  I have in my collection another member of the Vivianite Group, and its namesake, the hydrated iron phosphate vivianite
[Fe3++ (PO4)2-8H20].
I have a really nice crystal ~2 cm. in length, black in color, prismatic (elongated along C axis), flattened (along B axis), very soft (2 or less; Mohs), vitreous luster, and appearing opaque.  A second specimen from Virginia is a dark black cleavage fragment (mica-like cleavage parallel to C axis) but with a dull to pearly luster on the cleavage plate.

This description ties in with the description of Vivianite Group members except the bright coloration.  What I have are two specimens that are have turned black from oxidation of the iron from Fe++ (ferric) to Fe+++ (ferrous).  Very fresh vivianite is colorless but with oxidation it goes through a number of color changes ultimately ending up black, and perhaps morphing into a new mineral  metavivianite
[Fe2++Fe+++(PO4)2(OH)2-6H2O].  Petrov (2008), in a wonderful article on MinDat, stated the vivianite “alteration is accompanied by a progressive colour change. Absolutely pure fresh end-member vivianite is colourless! A minor amount of light-induced oxidation rapidly changes the colour to a brilliant transparent green... Further oxidation changes the colour to a deeper emerald green and a strong pleochroism sets in, with the colour in transmitted light becoming a cobalt blue… Eventually the whole crystal turns an opaque deep blue and finally bluish black.”

Vivianite, a secondary mineral, is also interesting in that it is found in igneous environments (granitic pegmatites containing phosphates) and in recent sediments where it replaces organic material.  Many references also place vivianite in oxidized zones of metallic ore deposits; however, Petrov (2008) noted the mineral is not characteristic of the oxidized zone but of “deep unoxidized levels of ore deposits.”

What I don’t know is if my specimens are actually vivianite or have oxidized, or partially oxidized, into metavivianite. I presume vivianite since that is the noted mineral (MinDat) at Bingham District, Utah, and Richmond, Virginia.

I learned much from this little exercise and hopefully will be able to recognize vivianite if there is an opportunity to again observe!


The other day I was reading a copy of the Mineralogical Record, a mineral magazine (actually more like a professional journal) that is issued bimonthly and is the most authoritative and widely respected mineral collector's journal in the world; no serious advanced collector would be without it (www.minrec.org).  I did notice that Wendell Wilson, the Editor-in-Chief and Publisher since ~1977, continues to publish an outstanding magazine with beautiful color photos.
My mind often goes in interesting directions and I decided to see if a mineral was named after the Editor.  Sure enough, wendwilsonite was named in 1987 for a hydrated calcium magnesium arsenate (contains the AsO4 radical)—Ca2Mg(AsO4)2-2H2O.  In reading descriptions of the mineral I noted it was often referred to as the “magnesium analogue of roselite.” That perked my mind up since I purchased a small specimen of roselite at an estate sale about three years ago and it was filed under “Africa” in a home drawer.
I originally purchased the specimen since the crystals were nicely formed and were gorgeous rose-red to rose-pink in color.  At that time I guessed the color might be due to cobalt but was not certain.  It turns out that roselite is the cobalt analogue of wendwilsonite; cobalt replaces some of the magnesium [Ca2(Co,Mg)(AsO4)2-2H2O] and thus forms a solid solution series.  Any specimen rich in magnesium is wendwilsonite while the cobalt-rich specimen is roselite. But, wendwilsonite usually contains enough cobalt to give a pink color to the crystals while roselite always has some magnesium and many of the crystals are zoned, and are of a lighter shade of color with a decreasing cobalt content.
Early on I also assumed that roselite was given its name due to the rose red color.  Wrong!  The mineral was named for Gustav Rose, a German mineralogist.  But could there be some relationship between the color and the name?  Only the authors know that answer.

Roselite crystals are actually quite beautiful with their color and vitreous luster.  They are usually transparent grading to translucent and are fairly soft at ~3.5 (Mohs) with a red streak.  The individual crystals range from tabular to prismatic, often twinned, and seem to occur in aggregates rather than individual and well defined crystals.

I find it interesting that roselite (Monoclinic Crystal System) has the same chemical formula (are therefore dimorphs) as another mineral termed beta-roselite (or β-roselite) that belongs to the Triclinic Mineral System.  They have the same color and everything and I seriously doubt if I could tell the difference; however, β-roselite is a very rare mineral.  The same goes for identifying a red to pink specimen of wendwilsonite!

My specimen of roselite (I have none of wendwilsonite or β-roselite) came from its most famous collecting locality, the mines of the Bou Azzer District, Morocco.  The District contains over 60 ore bodies enriched with cobalt and nickel.  Mining of cobalt, nickel, arsenates, gold and silver started in 1928 and in 2006 the mines produced about 8 percent of the annual world cobalt production (Hawkins, 2006).  The ore bodies are associated serpentinites of a Precambrian ophiolite sequence in contact with igneous intrusions and volcanic rocks (Ahmed and others, 2009).  In other words magmatic fluids from the intrusions interacted with upper mantle peridotites (olivine- and pyroxene- rich) and rocks called ophiolites that are pieces of the earth’s upper mantle and ocean floor.  This sequence of rocks seems to date back to the late Precambrian (700 to 600 Ma) when the plates building what is now Africa were banging into each other.  Geologists know this event as the Pan-African Orogeny.  In addition, these rocks were later uplifted by compressional mountain building during the late Paleozoic (Hercynian Orogeny) (Ahmed and others, 2009).  So, the enrichment of primary sulfides came from hydrothermal interaction of magmatic solutions with the serpentinites. 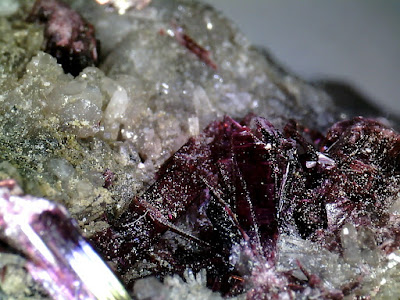 Bou Azzer also produces another beautiful cobalt-colored mineral: erythrite, a hydrated cobalt arsenate [Co3(AsO4)2-8H2O].  It also has that crimson to red to pink-violet color, is translucent to transparent, and is very soft at ~2 (Mohs).  Crystals, usually striated and prismatic, are flattened and these factors, plus the softness, distinguish erythrite from roselite.  However, they are found together at Bou Azzer along with a variety of other cobalt-rich minerals (cobaltite) and varieties (cobaltoan calcite; cobaltoan dolomite). Since erythrite and roselite are secondary minerals in the oxide zone they most likely oxidized from one of the primary sulfides such as cobaltite [(Co,Fe)AsS].

There is also a second variety of erythrite in the mineral world commonly known as cobalt bloom where the specimens contain cobalt as a druzy-like coating of earthy, non-crystalline material.  It still has the pink to red color but is much “duller” that the nice crystals since it is sort of a weathering crust.

Since Bou Azzer also has abundant nickel it would be worthwhile to note that erythrite is in a complete solid solution series with annabergite---the nickel ion substitutes for cobalt ions: Ni3(AsO4)2-8(H20). Evidently there are less attractive “middle members” of the series that I have not observed.  Annabergite also occurs in two forms: 1) the common druzy, dull and earthy weathering crust called nickel bloom; and 2) very nice apple green, translucent to transparent, vitreous crystals.  The crystals are either the flattened blades like erythrite, or acicular masses, often in radial aggregates. My specimen of annabergite does not come from Bou Azzer but from the Lavrion District in Greece and contains both cobalt bloom and a mass of tiny acicular crystals.
Erythrite is also the cobalt analogue (isostructural; same structure but different chemistry), and annabergite is the nickel analogue, of the rare hydrated arsenates kottigite (zinc), parasymplesite (Fe), and hornsite (Mg).
I have a third specimen of erythrite collected from near “Cobalt, Canada,” one of those old prolific mining areas in Ontario.  Regardless of its name, silver was the major metallic commodity with production starting in the early 1900s and ceasing in the 1930s.  At one time the Cobalt District mines were the world’s largest producer of silver and total production over the years totaled nearly a thousand tons.  The silver was associated with nickel and arsenic minerals like skutterudite and very little of these toxic elements were removed from the landscape; there are a host of environmental problems today.

I was unable to locate exact production figures of cobalt and nickel for the Cobalt District; however, Young and Perrone (2013) noted that “small high-grade deposits of nickel-cobalt arsenides furnish significant quantities of cobalt. Arsenide ores from Cobalt, Ontario, gave Canada world leadership in production for the period 1905-25. Cobalt output from this area stopped in 1971 but was reactivated in 1995 as a primary production…Canada produced 2013 t of cobalt as recoverable metal…in 2000.”
My specimen has small areas of cobalt bloom along with several “globs” of skutterudite (cobalt iron nickel arsenide; see Post April 21, 2013) and an old label noting the presence of “smaltite an arsenic-deficient skutterudite.”  At once time smaltite was recognized as a distinct mineral that was lighter in color, more tin white in color, than skutterudite.  However, smaltite is now considered as a variety of skutterudite.
The Canadian specimen also exhibits several slender lathes and sprays that have a green to light green to almost clear color.  My wild guess is that they are lathes of annabergite!
REFERENCES CITED