Besides Crowley’s Ridge Agates (noted in the preceding Blog), Arkansas has produced a variety of other minerals including the famous water-clear, terminated quartz crystals, and the well-known diamonds.  Michael Howard has a web site entitled Rockhounding Arkansas and I would refer readers to that site: www. http://rockhoundingar.com/.  Howard notes that over 300 minerals are known from Arkansas with ten of them first identified and named from the state.  The Arkansas Geological Survey has an interactive web site describing mineral collecting localities: http://www.geology.ar.gov/geology/fieldtrips.htm.  For this small article I will only describe a few minerals that I have in my collection. 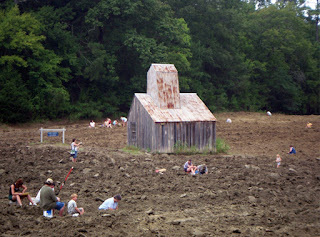 "Digging For Diamonds" photo by Doug Wertman from Rogers, AR, USA
Today, most people associate Arkansas diamonds with the diggings at Crater of Diamonds State Park (southeast of Murfreesboro).  Diamonds have been “mined” in this area, off and on, since their discovery in 1906.  Essentially all of the commercial attempts have failed, mostly due to the production cost per carat.  The most successful of the mining ventures begin in 1972 when the state established the Park for the enjoyment of rockhounds.  For a fee, visitors may search a ~38 acre piece of plowed ground and keep all diamonds located (average of one or two per day for the entire Park).  Most finds are small specimens, less than one carat, and many are the result of these tiny stones slipping through the screens/mesh of earlier commercial ventures.  However, perhaps 30k diamonds have been found in the Park since 1972, among them a 16.37 white gem.  Before the creation of the state park, two diamonds of note include The Uncle Sam at 40.42 carats and the Star of Murfreesboro at 34.25 carats.  It is my understanding that recent “reality shows” on TV have caused a spike in the number of visitors.  My prospecting experience falls into the category of “fun; a nice one-time experience”.
The geology of the diamond finds are more interesting, at least to me, than the gems themselves.  All of the diamonds are associated with an explosive event, ~106 Ma in the Cretaceous, that brought up rocks from deep within the earth’s mantle.  These rocks are generally preserved in structures called pipes or diatremes and in Arkansas are known as lamproite.  These rare rocks are similar to better known kimberlite and peridotite.  Most of the Arkansas diamonds are found in a sticky gumbo that results from weathering of the mantle rocks (lots of chlorite, olivine, and clastic fragments).  Since the diamonds are essentially impervious to weathering, they were preserved and will screen out of the clay.  Above history from Howard, 2007.

The famous diamond-bearing pipes of South Africa are similar in nature to the Arkansas occurrences and early promoters were hoping for a corresponding discovery.  Here in the Mountain West numerous diamond-bearing kimberlite pipes have been located in the Colorado-Wyoming State Line Diamond District.  It is my understanding that over 100k diamonds have been commercially produced from this district.  However, I believe all areas are now closed.  See the Blog posting 6/10/2014.

Most rockhounds have not had the “luck” to locate an Arkansas diamond; however, many (including several members from the CSMS) have been able to collect magnificent, water-clear, terminated quartz crystals.  Howard (2008) has compiled a history of the area and the following information is from his work at the Arkansas Geological Survey.

Generally the crystals occur in veins that are most productive in a belt approximately 170 miles long and 30-40 miles wide extending from Hot Springs southwest to eastern Oklahoma.  This belt is the core of the Ouachita Mountains and the veins and pockets are found in both Paleozoic sandstones and shales.  Generally the sandstone-hosted crystals are clear while those found in the shales are milky or cloudy.

The quartz veins are associated with the orogenic folding of the rocks and the fractures (holding the crystals) generally follow the bedding of the folds.  Percolating, silica-rich, meteoric waters deposited the SiO2 about 280—245 Ma during the building of the Ouachita Mountains.

Howard noted that at least 11 fee-operated quartz digs were in operation (in 2008), with most in the vicinity of Mt. Ida.  In addition, tens of rock and mineral shops in the state (and elsewhere) offer quartz crystals of all varieties, including some really black crystals.  Although the quartz mines do produce some uncommon smoky varieties, there are several dealers who sell irradiated crystals.  An honest dealer will advertise the “smoky quartz” as irradiated while other not-so-honest sellers simply call it black Arkansas quartz.

On a field trip long ago I collected a few nice crystals from open road cuts.  However, if I visited the state again I would consider a fee-operated dig, unless a member of the local rock and mineral club volunteered to guide! 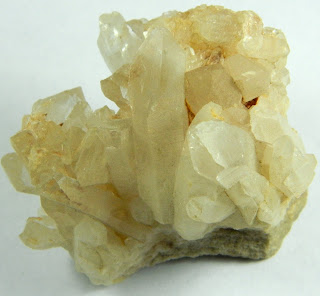 I don’t know much about bauxite except that it: 1) is an ore of aluminum; 2) forms in a tropical to subtropical environment; 3) occurs as small to large oolites; and 4) is mined in Arkansas.  I learned all of these facts in a grade school geography class!  What I later learned as a geology student is that bauxite is not really a “mineral” but is a composite of several different aluminum-rich minerals: [gibbsite—Al(OH)3, diaspore—AlO(OH), boehmite—ALO(OH)],  a couple of iron oxides [hematite—Fe2O3,  goethite-- FE3O(OH)],  and a clay mineral [kaolinite—Al2(Si2O5)(OH)4].  Interested readers may locate additional information about Arkansas bauxite at a Blog posting dated 11/21/13. 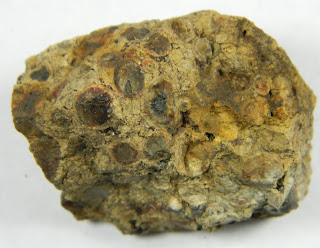 As a kid growing up in rural Kansas, and being somewhat inquisitive, I was always asking some of the local “old timers” questions, lots of questions!  One concerned the best sharpening stone for my pocket knife.  I was informed never to use my father’s artificial carbide wheel but to acquire, perhaps from Santa Claus, a whetstone from Arkansas.  I did receive such a stone, from my grandfather, and later in life as a student decided to find out more about the collecting localities of these stones.  Arkansas Whetstones are composed of a material called novaculite, and more specifically quarried from a geological formation formally named the Arkansas Novaculite (Devonian to Early Mississippian in age, ~400 -~345 Ma) found in the Ouachita Mountains.  Novaculite is a recrystallized (probably from low grade metamorphism) form of chert or flint (a microcrystalline quartz), and is extremely pure (~99% silica). See Blog posting 5/04/13.

One interesting aspect of this 2013 posting was an email from a reader in Europe. He asked if I could get him a sample or two and was interesting in purchasing novaculite.  I told him that I would try to locate a few samples when I attended the 2013 RMFMS Show in Tulsa, Oklahoma. He then told me that his purchases would be at least 21 barrels per year.  Whoa. I immediately contacted a mining company in Arkansas and gave them his contacting information!

Another Arkansas mineral that collectors appreciate is wavellite, a hydrated aluminum phosphate [Al3(PO4)2OH,F)3-5H2)] that commonly appears in botryoidal and radial aggregates. Fairly soft at ~3.5-5.0, the usually green mineral has a vitreous to silky luster and is translucent.  It sometimes occurs with another green, hydrated aluminum phosphate, variscite [AlPO2· 2H2O].  Other Arkansas collectable phosphates include microcrystals of cacoxinite and rockbridgeite. For additional information see Blog posting 12/12/13.

A long time ago, as I am fond of stating, I had the opportunity to spend a short amount of time in Arkansas participating in a geology student field trip.  One thing I remember is trying to collect through the brush, mud and bugs at a place called Magnet Cove.

I later found out that Magnet Cove is of tremendous geologic interest since it (all five square miles) has produced in excess of 100 different minerals, many of them rather uncommon and at least five new to science (such as kimzeyite, a zirconium-rich garnet).  Magnet Cove is an alkaline (low silica, high potassium and sodium minerals) intrusion into the surrounding Paleozoic sedimentary rocks.  The name comes from an abundance of magnetite found in the surface.  The magma associated with the intrusion did not reach the surface and includes some rare and unusual rock types that seem associated with a melt that was originally a CO2-rich basaltic liquid in the earth's upper mantle (above from Howard and Chandler, 2007).  The intrusion seems related to others scattered across this part of Arkansas including the famous Crater of Diamonds noted above.

Three of the more collectable minerals from Magnet Cove are brookite, rutile, and magnetite; all produce nice crystals.  Rutile and brookite are both titanium dioxides (TiO2), but crystallize in different crystal systems--polymorphs.  In fact, there are five mineral polymorphs of TiO2 (brookite, rutile, anatase, akaogiite, unnamed) that occur in nature---all belong to different crystal systems!  The Magnet Cove specimens of rutile and brookite are often associate with terminated quartz crystals.  This combination forms an attractive display.  The magnetite crystals are often nice octahedrons.

In summary, I have a number of other microcrystals from Arkansas but really don’t have much of a sample of the 300 known minerals.  I certainly would like to return and hunt for additional specimens but especially any of the rare Magnet Coves minerals.

I have been inspired in my life by Henry David Thoreau:  Go confidently in the direction of your dreams.  Live the life you imagined.  My dream has always been to pick up rocks, observe natural surroundings, interact with people, and enjoy sunsets.  I often get quizzed, especially by persons approaching that magic age, what do you do in retirement?  My first answer is that I have not really retired but simply moved on to a new phase in my life.  I drink good strong coffee (black please), read, write, hike, camp, fish, enjoy time with my spouse, travel, try not to take myself very seriously, and have a relaxing adult beverage (IPA please) in the late afternoon.  I try to avoid committee meetings, do avoid employee reviews, and shrug off most strategic plans.  I am fond of saying, Life is Good.