A couple of years ago, while attending the RMFMS meeting in Wichita, Kansas, a gentleman walked in with a paper bag and approached a dealer where I was examining a few specimens.  He opened the bag and asked the dealer if he could help identify his rocks.  Being curious, I stayed around to look at “what was in the bag.”  To my surprise, he dumped several nice mineral octahedrons on the case and said he found them along a “draw” over in Marion County.  Well, this really piqued my interest since mineral crystals are not all that common in Kansas—except for the Tri-State Lead and Zinc District in the southeast part of the state.  My initial guess, without handling the specimens, was weathered magnetite.  I hustled away to locate a magnet and a loupe from a friend but alas, when I returned, the sack was “gone” and the dealer said the specimens were purchased by “someone.”  So that tale ended there on the Kansas prairie. 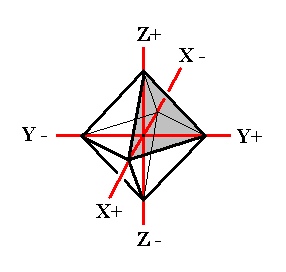 Upon returning home I could not find evidence of larger specimens of magnetite that had been found in Kansas.  A few small octahedrons are present in the kimberlites north of Manhattan and the “black sands” found in western Kansas streams usually contain tiny magnetite grains (detected by a magnet).  That was about it until I ran across a reference to a small article published by A.C. Carpenter in the 1941 Transactions of the Kansas Academy of Science, New Mineral Localities in Kansas:

Although small octahedrons of limonite pseudomorphs after magnetite or pyrite have been found in Kansas for at least 50 years [late 1880s], definite localities where they found be located remained unknown.  All known collections either bore the label “from Kansas” or else carried the name of a county as McPherson, Dickinson, and Marion. Last New Year’s week I…found a number of octahedrons of limonite pseudomorphs on the John Reimer farm in sec. 12, T. 18 S., R. 4 E., 1 mile north and 1 ¼ miles east of Lincolnville in Marion County…A second locality is reported to be near Roxbury in McPherson County.

A glance of the Kansas Geological Survey’s selection of county geologic maps indicates that Marion County does not have a county report nor county map.  Therefore, the larger scale State Map was used to place the collecting locality in Permian strata, probably rocks of the Sumner Group (redbeds and evaporite).  In addition, Carpenter noted that additional limonite pseudomorphs were reported (no reference) “to be near Roxbury.”  That small town is in northeastern McPherson County, east of Marion County, where a small sliver of Sumner Group rocks, maybe the lower formation (Wellington) crop out along a creek.  That is my best guess; however, I cannot locate references describing pyrite (or limonite) in these rocks.


Mindat.org believes that limonite is probably not a recognized mineral name but is used for unidentified massive hydroxides and oxides of iron, with no visible crystals and a yellow-brown streak.  Limonite is most commonly the mineral goethite (FeO(OH).  Chemically, limonite is Fe,O,OH,H2O or Fe,O(OH)-nH2O.  Pyrite is FeS2and limonite forms during chemical weathering where water hydrates the iron but the original crystal shape of pyrite remains..

One of my former students, living in Kansas, knew I was interested in these Kansas crystals and sent me 2copy of a brochure published by a New York mineral dealer in 1902.  One of the minerals offered for sale by George L. English was LIMONITE PSEUDOMORPHS AFTER MAGNETITE, Kansas.  Excellent ¼ to 3/8 inch octahedrons, 1 dozen for 10c.  Evidently the 1902 brochure came from a 2017 discussion on MinDat (https://www.mindat.org/mesg-7-409374.html) where a consensus was reached that the crystals were limonite after pyrite rather than after magnetite.

However, there is more to the story.  The first tidbit is that I recently was rummaging around a rock shop and behold there was a stray octahedron with a label stating, “limonite after magnetite, Kansas.”  It had to be! Yep, it looked just like the newly determined limonite after pyrite crystals pictured on MinDat.  So now, I finally had one of these somewhat elusive Kansas crystals.

The second tidbit involves the New York dealer, George L. English. According to the Mineralogical Record Biographical Archive, English was a very famous collector and dealer (certainly more so that I knew). He was born in Philadelphia (1864) and was selling minerals in that city by 1887: “a truly wonderful assortment of Arizona wulfenites, vanadinites, azurites, and malachites in addition to fine Franklin fowlerites.”  He picked up a couple of partners and opened a New York branch 1887 and by 1889 his ad stated, “We deal exclusively in minerals…It is universally acknowledged that we have the finest and most complete stock of minerals in the United States.”  In 1896 English incorporated his company, now completely in New York, and sold 150 shares (at $100 each).  Mr. Lazard Cahn was a member of the Board of Directors. English spent the latter part of his life working for, and with, Ward’s Natural Science Establishment, serving as a consulting mineralogist, evaluating collections and establishing monetary values for minerals, and writing a very popular book entitled Getting Acquainted with Minerals.  He recognized as new minerals penfieldite, graftonite, pyroxmangite, and skemmatite, and referred them to investigators for detailed descriptions. A rare hydrous phosphate of calcium, potassium, and aluminum from near Fairfield, Utah, was named englishite in his honor.  English died in 1944. 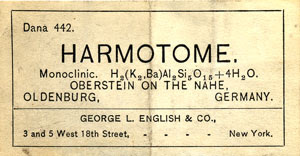 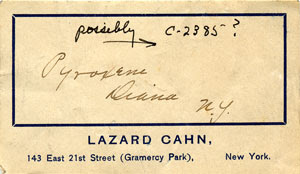 Of interest to me, other than the limonite after pyrite octahedrons, was English’s relationship to the founder, and Honorary President for Life, of my home club, the Colorado Springs Mineralogical Society.

Wilson, in the Mineralogical Record Biographical Achieves, noted Cahn began dealing in mineral specimens for pleasure in the mid-1890's from his offices in New York City. Cahn's first advertisement appeared in the Exchange Column of the July 1895 issue of The Mineral Collector. He wanted to buy or exchange for "very choice, well crystallized American minerals," and offered for sale Colorado amazonite and orthoclase twins, rhodochrosite crystals on matrix, bastnasite pseudomorphs, arfvedsonite crystals and pyrite crystal groups. So, by 1896 Lazard Cahn evidently was a well-respected mineral collector/dealer living in Colorado Springs while keeping an office in New York and was invited to join the Board of Directors of the George L. English Company. 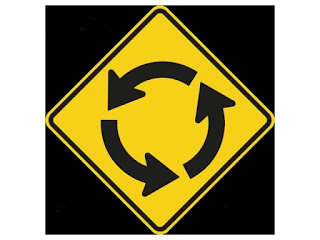 I've always loved life, and I've never known what's ahead. I love not knowing what might be round the corner. I love serendipity.  (Twiggy).  So it goes, round and round: Octahedron pseudomorphs---George English---Lazard Cahn---Colorado Springs Mineralogical Society---Mike---Octahedron pseudomorphs!!