ON TO MEXICAN HAT WITH FOREST GUMP: I GUESS SOMETIMES THERE JUST AREN’T ENOUGH ROCKS

The journey through the Red Rock Country of southeastern Utah continues.  At the last stop we were camping in Monument Valley and keeping a sharp eye out for John Wayne or Jim Chee.  But now it is on to Mexican Hat—a great moniker for a village and, we will be looking for Forest Gump chugging down the road..  Before leaving the Navajo Nation a glance to the west revealed some sort of a rocky creature protruding out of the red rock desert.  This is Alhambra Rock, a feature that early Spanish Explorers decided looked like Alhambra Castle in Granada, Spain.  I suppose wanderers wondered if they would ever return to the homeland.

Alhambra Rock is another one of those igneous intrusions that blew through the overlying sedimentary rocks leaving behind particles of the red rocks encased in cooled magma.  These rocks associated with the diatreme are known as minettes and those at Alhambra Rock are similar to the rocks at Agathla peak visited in the last posting.  The difference is that Agathla peak is a sharp-pointed igneous feature that resembles the throat of a volcano.  Alhambra Rock is a vertical dike that has a very low relief, ~250 feet, but “cuts through” the surrounding country rock for about three miles.  It is just harder to get a good picture in your mind of the dike.  However, one can easily see one the dikes trending southward and actually intersecting U.S. 163. Again, both Agathla Peak and Alhambra Rock are part of the much large Navajo Volcanic Field where the numerous intrusions are ~25-30 Ma.
Mexican Hat is sort of a blip on the road but has some great geology and interesting photo ops.  The village was founded in in very early 20th Century when a prospector noticed an oil seep along the San Juan River.  Drilling commenced and for a few years the boom was on.  However, the source rock turned out to be a few small carbonate reefs in a Pennsylvanian limestone situated in a syncline.  That is an unusual occurrence since oil is often found in the crests of anticlines (dome-like structures).  By the 1950s the oil boom was over but every itinerant rockhound was out with a small Geiger counter looking for uranium to supply the needs of the U.S. Government.  When Uncle Sam decided he had enough radioactive material, the hunt was over.  Interestingly you can still see some of the old claim markers scattered around the countryside.  Today the visitors to Mexican Hat are there to see the “Hat” and to stop in at the San Juan Trading Post to chomp down on Navajo tacos.  I did both!

The “Hat” is an erosional remnant of sandstone layers in Late Pennsylvanian rocks belong to the Halgaito Shale of the Cutler Group.  Readers may also see references to the “lower Cutler beds” but Stevenson (2000) believed that Halgaito is the correct designation and noted the red siltstones and sandstones, with accompanying carbonate tidal channels, were deposited along an arid and low lying coastal floodplain.

Stratigraphically below the Halgaito (but not exposed at the Hat) is the Honaker Trail Formation (Hermosa Group) of Pennsylvanian age composed of marine carbonates and clastics grading eastward into arkosic (feldspar-rich) sediments shed from the rising Uncompahgre Range to the east (part of the Ancestral Rockies)—another story for later.  The Honaker Trail crops out in the exposed core of the Raplee Anticline and is overlain by the Halgaito Shale.  The Honaker Trail is also exposed at the San Juan River bridge at Mexican Hat.
I have always noted, on my Bucket List, a visit to Goosenecks State Park (Goosenecks of the San Juan).  UT 61 takes off from US 163 a few miles north of Mexican Hat and connects with UT 316 for a short trip the Park.  These incised meanders of the San Juan River are pictured/figured in virtually every Physical Geology and Geomorphology textbook and this was my year to check them off the list. 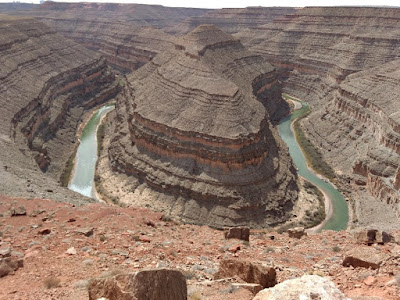 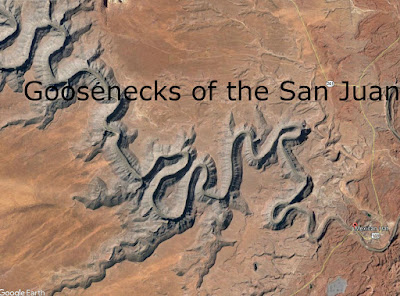 At the Park overlook visitor look down about 1100 feet to the meandering San Juan River.  However, unlike most river meanders the features on the San Juan have “cut down” into the Honaker Trail Formation so that the River bends are entrenched in the bedrock.  The mechanism and timing for the entrenchment has baffled geologists for decades. Stevenson (2000) noted that “in general, the river course formed in Tertiary lake and river deposits and were subsequently superimposed onto the underlying bedrock and buried structures across the Province.”  The rate of downcutting is about comparable to the rate of uplift of the Colorado Plateau.  This rate of uplift had become significant during Oligocene to early Miocene. Whatever the case, the view from the State Park is absolutely amazing and any visitor to the area should take in the site--a real bargain for the $5 park fee.

You try to walk a straight path in life. When you get to be my age, you look back at your footsteps and you can see where you went wrong.  Wilson Sam (Navajo Nation) in the Tony Hillerman book Skinwalkers.