I have a soft spot in my heart for the State of South Dakota as I attended the University, completed a research project in the badlands, and have made numerous collecting trips throughout the rock column. The Black Hills are one of my favorite places to camp and explore since many of the well-exposed pegmatites are still collectable, and there are many postings on this blog detailing the geological scenery of the Hills.   However, geological features in the eastern part of the State often are overlooked; hence, the subject of this posting. 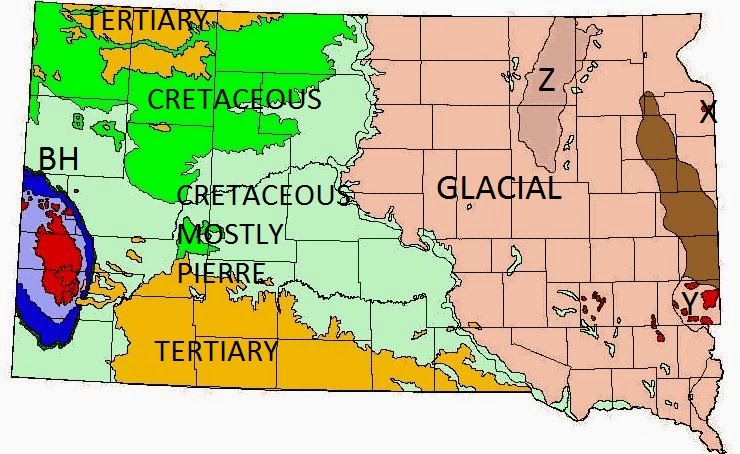 South Dakota exhibits a variety of landforms that the U. S. Geological Survey places into either the Great Plains or the Central Lowlands Physiographic Regions. Each of these regions is further subdivided into smaller sections.  However, I find it much easier to think of the state divisions as: 1) East River (the Central Lowlands) where the landscape is generally subdued and is covered by a variety of glacial sediments; 2) West River (the Great Plains) and its magnificent outcrops of Cretaceous and Tertiary rocks; and 3) the Black Hills, a Laramide mountain range that is part of the Great Plains but more closely related to the Rocky Mountain ranges.  Of course, the "river" here is the mighty Missouri River bisecting the state in a generally north-south direction. 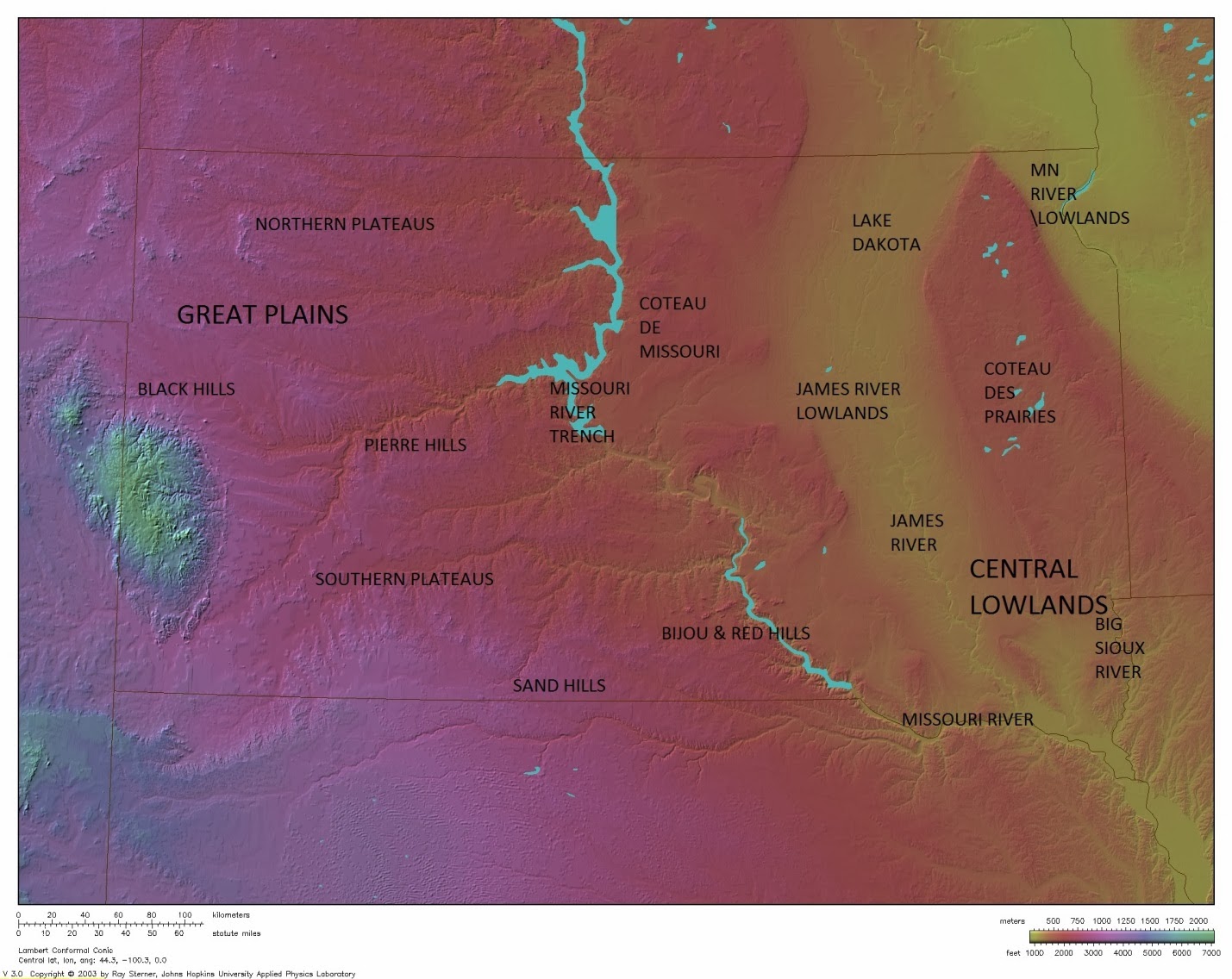 For readers who have traveled east-west across the state, the changes in landscape are quite easy to observe.  East River has prairie potholes dotting the countryside and rich farm land supporting fields of soy beans and corn.  A limited number of streams exhibit rock outcrops but they are few and far between.  As soon as travelers enter West River the tilled farm lands turn to short grass cattle pastures, rock exposures are numerous, and relief becomes more noticeable. 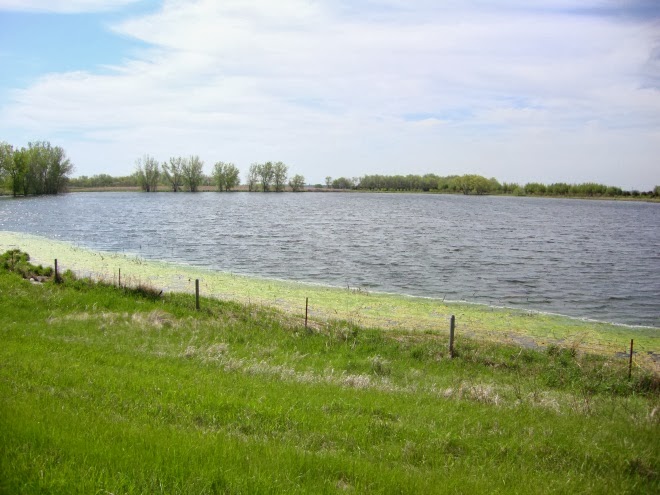 Prairie pothole in eastern South Dakota, probably a kettle. The retreating glacier left behind a block of ice that melted and resulted in the formation of a depression.  The water level fluctuates with ground water tables as streams neither flow into nor leave the lake.  In some years the potholes are dry.

One of the major contrasts between the two sides of the state is the arrangement of the drainage systems-consult the maps shown above.  In West River numerous streams flow in an easterly direction into the Missouri River.  Major drainage systems East River, with the exception of the James River (Jim River to local Dakotans), are rare and all flow to the south, but also empty into the Missouri.  The James heads in North Dakota, flows south in what appears on the maps to be a wide valley (the James River Lowlands), and reaches the Missouri River near Yankton.  At ~ 710 miles the James is listed by some sources as the 18th longest river (main stem) in the U.S.  Geology students at the U always were told the James is the longest unnavigable river in the states; however, that may be a rumor?  The River is quite sinuous and fits very nicely with Mark Twain’s description of another American river: It seems safe to say that it is also the crookedest river in the world, since in one part of its journey it uses up one thousand three hundred miles to cover the same ground that the crow would fly over in six hundred and seventy-five.   Gries (2009) noted that with a gradient of about an eighth of a foot per mile, water in the James takes three weeks to cross the state.

In terms of valley width, the maps deceive viewers as the river actually flows in a fairly narrow valley that itself is located in a region known as the James River Lowlands.  This interesting feature, the Lowlands, is really the result of Pleistocene glaciation, actually at least two different glacial advances/retreats.  The first advance scoured out the Lowlands and when the second glacial advance came along it was forced down the lowland valley, squeezed between highlands to both the east and west and continued the scouring (see descriptions below).  At some time in the history of the last advance/retreat a moraine dammed the meltwater outflow from the lobe and a large lake was formed—Glacial Lake Dakota.  Sediments from this lake bed may be seen on the geologic map as the “finger’ extending down from North Dakota.  The lake finally overflowed and flooded the Lowlands creating the valley that now houses the current James River. 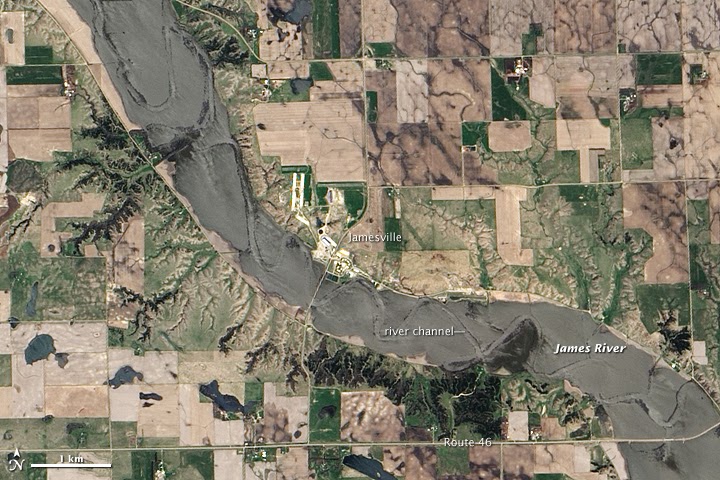 The James River commonly floods in the spring season.  Notice the meandering river channel within the river valley that in turn is entrenched into the James River Lowlands.  Photo courtesy of Earth Observatory.

West of the James River is a highland area known as the Coteau de Missouri (French for Missouri Hills!).  The hills are underlain by Cretaceous bedrock but surficial rocks are mostly glacial till.  However, some small streams close to the Missouri River expose outcrops of the Pierre Shale.
East of the James River Lowlands is a region known as the Coteau des Prairies (Prairie Hills). The escarpment leading from the Lowlands to the Coteau is one of the more noticeable areas of relief in East River (~500 feet).  The bedrock again is usually the Pierre Shale but surficial rocks are glacial till.  Dakotans know this area as “Lake Country” since prairie potholes, many times the result of ice blocks left behind (kettles), are scattered across the area.  The Coteau, along with the Missouri Hills to the west, “guided” a lobe of the Wisconsin (late Pleistocene) glacier down what is now the James River Lowland.

So, eastern South Dakota is essentially covered with glacial drift or meltwater sediments.  In a few places, notably in the southeast along the Missouri River (southern boundary) and Big Sioux River (eastern boundary), widely spaced Cretaceous rocks crop out (Pierre, Niobrara, Carlile, Dakota).  Even more interesting, however, are a couple of localities with exposures of Precambrian rocks.  On the geologic map (see above) note that in the northeast part of the state X represents the Milbank Granite.  This ~2.6 Ga rock unit sticks up above the surrounding sediments in only a few square miles along the Minnesota River.  However, numerous quarries take out large slabs of the “carnelian granite” or “mahogany granite’ (or a variety of other names) as it takes a wonderful polish.  The stone is used across the Midwest and plains (and perhaps further) for the construction of tombstones.  Milbank Granite, with its red color, is quite easy to identify in cemeteries. As a small side note, companies that commercially market tombstones are great places for field trips as they have a variety of well-displayed igneous and sometimes metamorphic rocks. 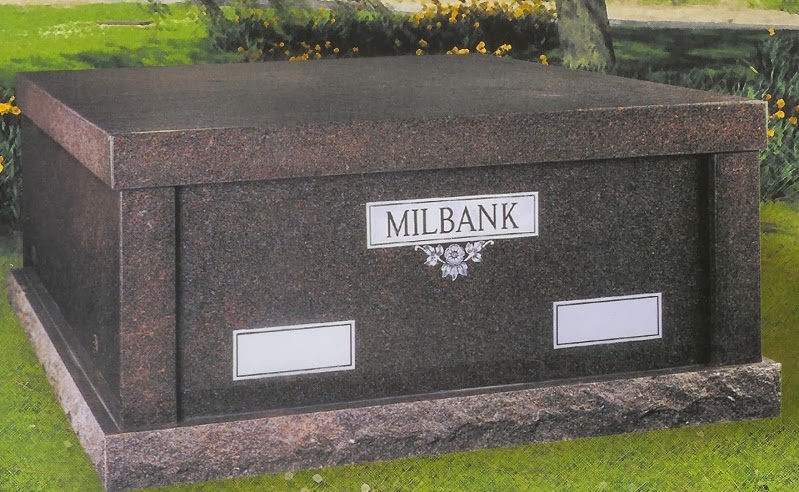 The Milbank granite “sticks up” in an area called the Minnesota River Lowlands that is home to a really interesting area called Browns Valley.  This Valley holds Lake Traverse whose waters flow north via the Red River into Hudson Bay.  The Lake is separated at the south end by a feature named the Traverse Gap from Big Stone Lake whose waters flow southeast into the Mississippi River.  Therefore, Traverse Gap is a continental Divide, albeit not one that Coloradoans might recognize!
Lake Agassiz was a major (~110,000 mi2) late Pleistocene lake situated in North Dakota, Minnesota and Canada resulting from melting waters of the large continental glacier (Wisconsin: Laurentide Ice Sheet).  About 9700 years ago these meltwaters broke through a glacial moraine (debris piled up by an advancing glacier) creating Traverse Gap while flooding southeast in a valley now known as Glacial River Warren.  This was a “major” flood and created the extra-large valley now occupied by a “small” Minnesota River. 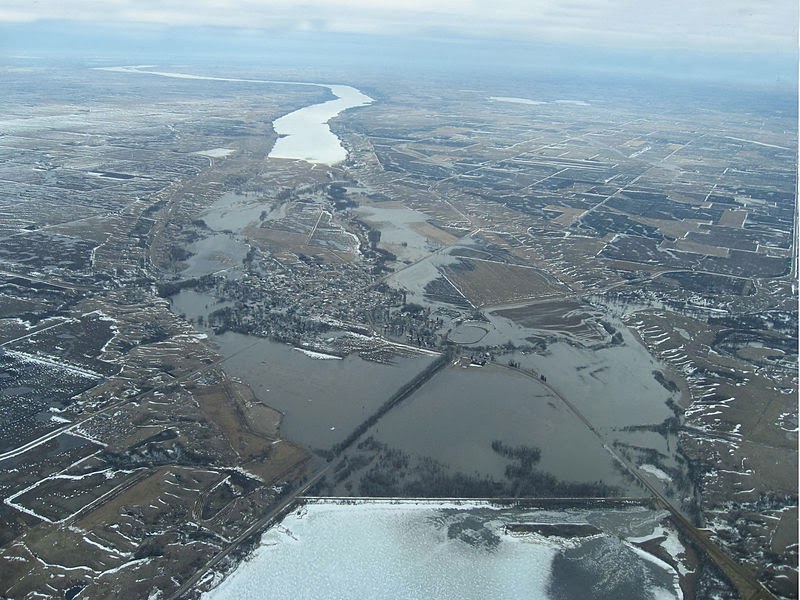 Aerial view of Traverse Gap looking south from Lake Traverse toward Big Stone Lake. Minnesota is on the left side, South Dakota on the right.  This shot was taken during a spring flood and water is over the Continental Divide (brown water covering Traverse Gap.  Will the flood water flow into the Mississippi River, or to Hudson Bay?  Photo courtesy of JOR Engineering, Inc.

The second area of interest is around and in the city of Sioux Falls (and in neighboring Iowa, Minnesota) where exposures (sticking up through the glacial drift) of a hard and scenic pink quartzite dot the countryside—see Y on the map.  The Precambrian (Proterozoic, ~1.75 to 1.65 Ga) Sioux Quartzite is, as the USGS describes, a “pink, reddish to tan, siliceous, fine to coarse-grained, iron-stained orthoquartzite with minor conglomerate and mudstone layers.  Estimated thickness is greater than 1,000 ft.”  Orthoquartzite is not a metamorphic quartzite but tightly cemented quartz arenite (sandstone).  The quartzite most likely was deposited by braided streams flowing into an old Precambrian ocean.  It is quarried at many places and numerous buildings in Sioux Falls and other cities/towns are constructed of the rock as well as tens of miles of “rip-rap” the Corps of Engineers has placed along the Missouri River and other streams.  I have examined many miles of this rip-rap (while searching for walleye) and cross-bedding and ripple marks are common features. 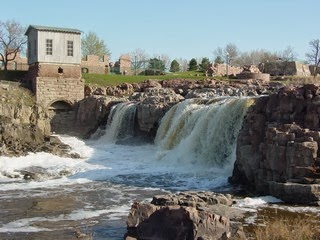 Fig. 8.  Sioux Quartzite exposed at the “falls” in the city of Sioux Falls.  Photo courtesy of Steve Dutch, University of Wisconsin.

The Missouri River Trench is a major topographic and geologic structure trending mainly north-south in the center of the state until the river abruptly turns east and then forms the boundary with Nebraska (the informal South Dakota boundary between “East River” and “West River”).   The Cretaceous Pierre Shale is well exposed along the entire trench, and in many places the underlying Niobrara Formation crops out.  In fact, the type section (where it was named) of the Niobrara is along the bluffs west of Yankton along the Niobrara River where it meets the Missouri River.  The Pierre Shale was named for exposures near the South Dakota state capitol, the city of Pierre, also situated along the Missouri.  Many readers are familiar with these two formations if they have traveled along I-90 and crossed the river at Chamberlain.  The view of the river and the Trench rocks is spectacular, especially if traveling from east to west. A long time ago I spent a summer in Chamberlain trying to unravel the secrets of landslides in the Pierre in preparation for the construction of I-90.
I wish to thank Ray Sterner of the John Hopkins University Applied Physics Laboratory for allowing me access to his files of state relief maps.

For additional information about other geological aspects of eastern South Dakota, see www.csmsgeologypost.blogspot.com