I am living out my adolescent dream of travel and adventure.
Tim Cahill 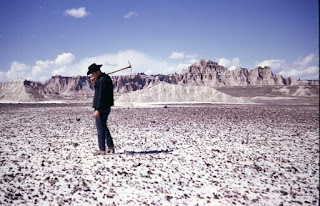 Hunting Fairburns, summer 1966.
I recently had the opportunity to hit the road on my annual two-week fall camping trip to the Black Hills of South Dakota.  Most readers certainly realize that I “fell in love with” the Hills during my academic stay at the University of South Dakota from 1965-67.  My Blog postings feature South Dakota more than any other state as I continue to explore the fascinating geology and physiography—along with brew pubs, coffee shops and non-chain eating establishments.  My major discovery this year was a small coffee shop located in a used book store in Douglas, Wyoming.  Wow, what a treat to find such a locality “on the road.”


An earlier summer trip to the northern Hills is documented in postings on August 9, 2017.  This fall trip took us back to the southern Hills with headquarters in Custer State Park at Legion Lake Campground.  This location gives me a chance to: visit collecting sites east of the Hills to explore for Fairburn Agates; pound on the limestone at Teepee Canyon collecting the parental site of the Fairburns; explore garnet localities west of Custer; pan for a little gold near George Custer’s camp sites on French Creek; visit the great rock and mineral stores in Custer, Hill City and Keystone; and relive my past geology adventures and travel (see Post October 15, 2017).  The latter are often enhanced by an aging brain!


Study what you love, and you’ll never have to work a day in your life.  It’ll be one great adventure.
David Gerrold


I can’t say that the limestone at Teepee Canyon produced any magnificent specimens this year; however, the joy of being alone and pounding away was certainly worth the trip.  For new Blog readers, the quarries at Teepee Canyon, and other nearby localities, produce chert nodules from the late Paleozoic Minnelusa Formation; some of the chert is “agatized” with holly leaf fortification agates.   The Minnelusa is described as “Light-brown to red and gray sandstone, solution breccia, limestone and shale [that is] Lower Permian and Pennsylvanian {in age] (DeWitt and others, 1989). In past years these agates from the Minnelusa were called “limestone agates” and most collectors were adamantly opposed to any relationship between limestone agates in the Hills and the Fairburn agates from the surrounding plains.  However, Roger Clark has constructed a detailed study of the Minnelusa--Fairburn relationship and any collector interested in Fairburn agates should read his book (Clark, 2009)---and the agate photographs are spectacular.


Another agate that crossed my knowledge path somewhere in the past was called the State Park Agate  (sometimes Game Lodge Agates) and referred to agates collected in Custer State Park near the Game Lodge.  Clark (2009) refers to these specimens as limestone agates since their source was also the Minnelusa Formation.  Since rock and mineral collecting is not allowed in the Park, any of these agates on display or for sale evidently were collected years in the past.  This year I happened to spot a tray of Park Agates for sale in a Custer rock and mineral shop—Ken’s Minerals.  According to the clerk, the original owner of the shop (opened 1936), Kenneth Spring, Sr., picked up these Park Agates decades ago when collecting was legal.  So, I purchased a single specimen for my collection.


I previously reported (October 7, 2017) on the Pringle Agates, also limestone agates and probably from the Minnelusa.  According to local shopkeepers the Pringle Agates always appear to be “bleached.”  I don’t know if that is true since I have seen very few agates attributed to the Pringle area.  However, my single specimen is certainly “washed out.”


So, now it was out to the plains east of the town of Fairburn for collecting at the original Fairburn beds.  I experienced “luck” at these beds in past years going all the way back to summer 1966.  This year I picked up a pretty poor one (a few faint lines on the jasper), a second specimen that is small but with nice lines, and finally a third that a friend trimmed, stuck in a tumbler and turned out a decent agate.  But perhaps the most exciting find was a silicified fossil (where silica had replaced the original calcite hard parts) known as Chaetetes milleparacedus.   The chaetetids were long thought to be a type of tabulate coral where their long, slender tubes contained tabulae or cross partitions (Phylum Cnidaria).  However, studies in the 1980s determined the chaetetids were a type of sponge (Phylum Porifera).  Chaetetids are very diagnostic animals, easy to identify and became extinct at the end of the middle Pennsylvanian (~307 Ma.)

The Minnelusa contains a diagnostic invertebrate fauna and silicified fossil shells sometimes appear with the Fairburn Agates out on the plains (Clark, 2009).  In fact, in 2014 I collected a fossil brachiopod and reported on the creature in a posting on October 7, 2014.  Whatever the case, Fairburns or no Fairburns, the beds are a place for relaxation just trekking around and noting the wild looking scenery.


Wandering I do.  A mile or so south of Custer, along the highway to Pringle (US 385), I was poking around in the roadside ditch looking for tourmaline (schorl) when I picked up a small piece of granite/pegmatite holding some larger garnets.  The dodecahedrons seem likely to be spessartines (manganese aluminum silicate) since they are black or dark brown in color and appear not to have a hint of red.  Of course, my mineralogy might be a little suspect and perhaps they are the iron aluminum silicate, almandine.


A couple of years ago a collector from Custer kindly gave me a quantity of rock from the Bull Moose Mine (~ 3 miles southeast of Custer city) with instructions to break it open and try to find small phosphate minerals.  Periodically I drag out the matrix and pound away.  This fall, on a slow night in October, I cracked open a bundle of pyrite crystals and discovered some beautiful lilac to and clear crystals of a phosphate.  Now, the problem arises—were the crystals phosphosiderite (AKA metastrengite), FePO4-2H2O, or strengite, FePO4-2H2O?  Yes, that’s correct---both minerals have the same chemical formula, a hydrated iron phosphate.  Phosphosiderite (Monoclinic) and strengite (Orthorhombic) are dimorphous minerals, that is they have the same chemical composition but belong to different crystal systems. And at the Bull Moose Mine, the two are difficult to distinguish; however, Tom Loomis at Dakota Matrix Minerals (www.dakotamatrix.com), the Black Hills guru of phosphate minerals, noted that phosphosiderite shows striations parallel to the long C crystallographic axis.  Since I am able to identify the striations, I am calling these neat little crystals phosphosiderite.

Phosphosiderite is a secondary mineral produced when primary minerals containing phosphate oxidize and the ferrous iron (Fe++) moves to ferric iron (Fe+++).  Notice above that the phosphate ion (PO4- - -) in phosphosiderite has in minus 3 charge and balances the Fe+++   Tom Loomis. over at Dakota Matrix. noted “triphylite is the primary phase [the primary phosphate mineral] which is very susceptible to hydrothermal oxidation and is the host for most of the secondary phosphates [such as phosphosiderite] from the Tip Top and many other pegmatites [such as the Bull Moose].  Triphylite, Li+Fe++PO4- - -, contains ferrous iron with a plus two charge, and lithium with a plus 1charge as they balance the minus 3 charge of the phosphate. Upon oxidation the ferrous iron moves to ferric iron as the lithium leaches away.


I also have a second specimen from the Bull Moose purchased from a rock and mineral shop in Hill City and labeled phosphosiderite.  However, I suspect it is strengite and another iron phosphate, barbosalite, Fe++Fe+++2(PO4)2(OH)2 . 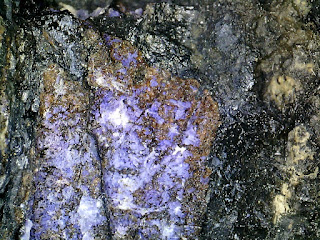 Pyrrhotite is a common mineral in the Homestake Mine of the northern Black Hills and an iron sulfide (Fe7S8 as listed in MinDat.org); however, it seems to have a variable amount of iron present (Klein, 2002) and is often listed as Fe1-XS. Pure iron sulfide (FeS where x in the formula is 0---50 atomic percent iron) is a mineral called troilite that is quite rare on Earth but seems common in meteorites. There seems to be a complete solid solution between troilite and “typical” pyrrhotite where x in the formula is .2---44.9 atomic percent iron (Klein, 2002).  That indicates the pyrrhotite has about 20% vacancy of iron in the crystal structure.  For reasons that seem unclear to my mineralogical mind, troilite is non-magnetic while pyrrhotite is magnetic.  Perhaps not as much as magnetite but never-the-less, magnetic, and easily attracted to a magnet.  In the solid solution series, the magnetism then varies with the iron deficiency (more iron, less magnetism) but if heated to ~320OC all magnetism disappears.


Nice crystals of pyrrhotite are brassy to a dark brown in color.  They have a metallic luster and an almost black streak on unglazed porcelain.  Hardness seems to range on either side of 4 (Mohs).  However, this specimen I picked up at a rock shop in Hill City contains massive pyrrhotite and is labeled: Pyrhotite (sic) collected on the Rocky Mtn GSA field trip 4/3/60 3650” level, Homestake mine Lead, South Dakota.  Unfortunately, the collector is not identified. Interestingly this specimen was collected nearly 60 years ago!


Roberts and Rapp (1965) stated “pyrrhotite is one of the most abundant and most characteristic ore minerals of the Homestake Mine.  It is never found in crystals, but occurs in irregular, vermicular masses…”


I also picked up a mounted specimen (Perky Box) of galena and calcite cubes labeled Homestake Mine 1961. I nabbed on to this due: 1) to the older date; and 2) to my memory believing galena was somewhat scarce at Homestake.  Galena is listed on MinDat.org as being present; however, photos are not shown.  Roberts and Rapp (1963) noted only the presence of small cubic crystals, <1mm, in a vug.


Another specimen of cubic galena was purchased and labeled as collected from the Double Rainbow Mine near the settlement of Galena in the northern Black Hills.  I love the connection between the mineral and the settlement although the pay zone was silver.  As with many gold/silver/lead prospects in the northern Black Hills, the mineralizing fluids are associated with the Tertiary intrusives---with metal formation in the bedding planes, cracks, crevices and vugs of the Cambrian Deadwood Formation.  The intrusives at Galena are composed of numerous sills and dikes that contain a wide variety of rocks with a fine-grained groundmass sprinkled with feldspar phenocrysts.  Check out the Blog Posting on October 22, 2016.


Finally, in a previous posting (October 7, 2016) I detained some accounts of George Custer’s trip to the Black Hills in 1874 and his “discovery” of gold on French Creek near the town of Custer.  In that post I noted that a flake or two of gold was still available to “wannabe gold panners.”  Well, the take was a little better this year!  I could never “get rich” off panning gold but do understand how early miners might get “gold fever” when first observing those tiny flakes.