IDOcrase: WHERE HAVE YOU GONE ?

Ido, as a male name, is of Germanic or Dutch origin and was more popular in long past years. Today the name, for new born children, is almost non-existent with only three U.S. babies born in 2011 awarded that moniker.  Likewise, it appears the mineral name idocrase has gone by the wayside after being “replaced” by vesuvianite.  Perhaps that is not quite correct as noted below; however, for some reason my mineralogy class had these nice crystals of “idocrase” in the collection, and that is what I learned to identify.  I really did not recognize the name vesuvianite until years later when I examined beautiful faceted specimens in a jewelry shop.  And, it was not until several years later that I connected idocrase and vesuvianite as being different names for the same mineral.


Vesuvianite was actually named “first”, in 1795, by Abraham Gottlob Werner for a mineral found near/at Mt. Vesuvius.  As best I can tell, Professor Werner was working to distinguish grossularite, a garnet, from this “other thing”---vesuvianite—that were found in metamorphosed limestone blocks blown out by the volcano. Werner was not all that healthy in his adult life and did not travel outside of Germany; therefore, some collector brought the specimens from Italy to his lab at Freiberg (I presume at the Freiberg Mining Academy).


Essentially every geology student studied Werner in their historical geology class because of his erroneous theory about Neptunism—that all rocks formed when minerals crystallized in oceans of the primitive Earth.  However, he did redefine the term "geological formation" to mean rocks deposited/crystallized at the same time.  Previously “formation” was used to define the chemical makeup of a rock.  On the other hand, he tried to establish “universal formations” to indicate that certain rock layers were deposited at the same time all across the surface of the Earth.  But, the 1700’s were a different time and a different place and geology has advanced!
Students of geology also know Werner as the “Father of Mineralogy”. Werner was a classical descriptive mineralogist and in 1774 published Von den äusserlichen Kennzeichen der Fossilien.  The book offered a classification of minerals along with techniques for identification.  Wernerite is a variety of scapolite, an intermediate member of the marialite (Na4Al3Si9O24Cl)---meionite Ca4Al6Si6O24CO3 solid solution series (www.mindat.org).
Rene Just Haüy is known, as least by some scientists, as the “Father of Modern Crystallography” and is the author of Essai d'une Théorie sur la Structure des Cristaux (1794), and five volumes of the Traité de Mineralogy (1801).  His ideas about crystals and crystallography came about in a serendipitous moment.  He dropped a piece of calcareous spar (calcite) and it broke into many “little” rhombs.  Voila, the small broken pieces looked just like “mom and dad”--same cleavage faces and same face angles.  Haüy had a personal collection in excess of 12,000 specimens but nearly died in the French Revolution (as an ordained Catholic priest he did not want to swear allegiance to the Revolution).  He taught at the Sorbonne and the Muséum d'Histoire Naturelle but was fired from those jobs by members of the Bourbon Restoration Government. It was a really tough time to live in France, but he did retain his “head” and died more peacefully in 1822.
Haüyne is a feldspathoid, sodalite group (often a beautiful blue color), [(CaNaCa)4-8(Al6Si6(OS)24)(SO4Cl)1-2] named after this mineralogist (www.mindat.org). At any rate, in about 1799, Haüy decided the mineral named vesuvianite by Werner should be named idocrase!  Why, I have not been able to determine.  I don’t know if the naming was due to a lack of communication among the few mineralogists of the world, or maybe Haüy just liked the name better!  Whatever the case, there has been some minor confusion about this mineral for a couple of centuries.  It is my understanding that gemologists prefer idocrase while crystal collectors like vesuvianite.  However, the names seem to be used interchangeably in the popular literature, BUT Mineral Data (www.rruff.geo.arizona.edu), the International Mineralogical Association, and MinDat (www.mindat.org) use vesuvianite as the “official” mineral name with idocrase listed as a synonym.  I don’t have the slightest idea why my mineralogy class preferred idocrase except that this offering was a long time ago!  So, from now on, for me, it is vesuvianite!


Vesuvianite has a very complex, at least for me to understand, chemical formula and interestingly contains both neosilicate (SiO4 with a silicon anion and one tetrahedron) and sorosilicate (Si2O7 with two tetrahedra) groups:  Ca10(Mg, Fe)2Al4(SiO4)5(Si2O7)2(OH)4.   The nicest specimens (and I have not seen many) that I have observed are green in color but specimens also might be brown to yellow to even a nice blue-purple in color.  If in crystals, they are usually prismatic and “eight-sided” with one set (of sides) being quite dominant so the prisms look square in cross section.  They are commonly terminated with a four-sided pyramid.  Vesuvianite is a fairly hard mineral at ~6.5 (Moh’s) with a vitreous to “greasy” luster.  Gemmy vesuvianite is transparent to translucent while other specimens are less than translucent (not quite opaque but something). 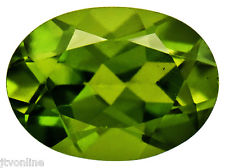 GEMMY AND FACETED VESUVINIATE, 1.25 CT, 8 x 6 CM.  PHOTO FROM EBAY.
﻿
Other than Mt. Vesuvius in Italy, vesuvianite, including gemmy varieties, is found in a number of localities world-wide.  Cyprine is a sky-blue vesuvianite (copper impurities) first reported from Norway but now known from other locations.  Californite is a compact (non-crystalline) and massive type of vesuvianite often cabbed and sold as California Jade.  The Jeffrey Mine in Asbestos, Quebec, produces a very rare violet to magenta variety (manganese impurities).  Egeran is browner in color and reported from the Czech Republic.
﻿ 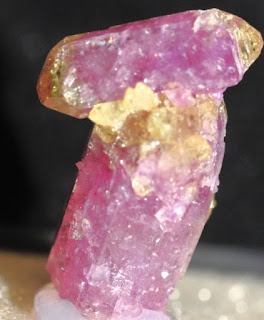 Most vesuvianite occurs in skarn deposits, especially in contact metamorphism of limestones.  However, at times it is found in regionally metamorphosed schist and serpentine.   I have never observed vesuvianite in the field (I was always looking for fossils) but Eckel and others (1997) have documented several localities in Colorado.  Perhaps the most interesting statement: “Park County—Badger Flats District.  Grayish green vesuvianite is an abundant constituent of calc-silicate gneisses of the Tarryall Springs District”. Maybe a field trip is in order!
The lone specimen that I have in my collection is a nice, but non-gemmy, crystal from “Lake Jaco, Mexico”.  However www.mindat.org noted that the locality named Lake Jaco is really a misnomer since the early mineralogist collecting crystals did not want competition at the mine!  So, as best I can tell the locality is Sierra de la Cruz (Lake Jaco), Mun. de Sierra Mojada, Coahuila, Mexico.  At least that is how MinDat lists the name.
In three words I can sum up everything I’ve learned about life: it goes on.  Robert Frost
REFERENCES CITED
Eckel, E. B. (and others), 1997, Minerals of Colorado: Fulcrum Publishing, Golden.

Post Script:  I recently acquired two green, gemmy crystals collected several years ago from the VAG Mine, part of the Belvidere Mountain Quarries. The quarries produced chrysotile asbestos from the early 1800's until 1993.