One of my early trips to the Black Hills of South Dakota was during a summer camping trip with a couple of college friends.  We were getting prepared for fall classes and “needed” a break from our summer of manual labor.  As usual, my father was not overly pleased with my absence from work; however, we were 20 years of age with borrowed IDs (well maybe that was just a dream since such action was illegal) and wanted to head west and see bears and mountain lions and climb mountains.  We were all small town kids and escaping a town of less than 400 persons and several dogs certainly was a major priority.  So, off we went ready to hunt for Custer’s gold, and meet wild women (well maybe not wild but just any females our age).  After a couple of days we sort of changed our failed priorities to better reflect realities, especially of the “boy meets girl” project!

Anyway, upon reaching South Dakota we spent some time in Badlands National Park and I became fascinated with the “wildness” of the area and the numerous vertebrate fossils.  Little did I know that in a few years I would be tromping around the badlands trying to complete a graduate thesis. Upon driving over to the Hills we took in the requisite tourist sites such as Mt. Rushmore, a fairly sleepy national monument in those days, Reptile Gardens (still there) and a place called the Cosmos Mystery Area.  The Cosmos “was discovered in 1952 by 2 college boys looking for a place to build a summer cabin.  When they entered this area they experienced a slight unbalance which increased considerably on entering the old house. The boys were interested and camped on the place while they investigated the odd phenomena.  They decided that here was something of interest to the general public, so they began to fix the cabin to make it safe and then developed the demonstrations that you will experience on our guided tour” (www.cosmosmysteryarea.com). In other words, there was money to be made from the gullible tourists, including three backwards kids from central Kansas.  We had a ball at Cosmos and came back to camp, actually with a stop at a German Beer Garden, determined to sketch out the whys and wheres of the paranormal experience---after all we were smart college kids with a science background, and cold Coors beer will fuel anyone’s imagination.  If you are really interested in the experience of Mystery Spots (and they are multiple localities in the U.S.), check out the web site at www.sandlotscience.com.

Now, why in the world did my mind bring up that long-ago experience at Cosmos of the Black Hills?  My answer is that I was thinking about preparing a small Blog offering on the mineral hureaulite, a hydrated manganese phosphate (Mn,Fe)5(PO4)2.  OK, so what. Well, hureaulite is “reputed to be a kundalini stone... as the golden light it emits can move up from the base and sacral chakras through the entire body, and stimulate the awakening of the kundalini” (http://www.healing-crystals-for-you.com).

So, with my kundalini activated I was brought to several “heightened states of mental functioning such as genius, creativity, inspiration, revelation, mystical experience, and paranormal faculties of mind”(www.kundalinistones.blogspot.com).  I am guessing that my kundalini revved my mystical experience at Cosmos of the Black Hills those many years ago.  Now, with my creativity in high gear, I need to finish this posting!

As readers know, I have a great love for the Black Hills and several Blogs are dedicated to the geology and rocks and minerals of this Laramide (late Cretaceous-early Tertiary) mountain range.  If any readers plan on exploring the Hills I would suggest a really wonderful book entitled Guidebook to the Geology of the Black Hills, South Dakota (Lufkin and others, 2009).  Although somewhat technical, the photos and the maps should excite any rockhound, and geologists will sleep with it under their pillow in order to transfer information to the brain. 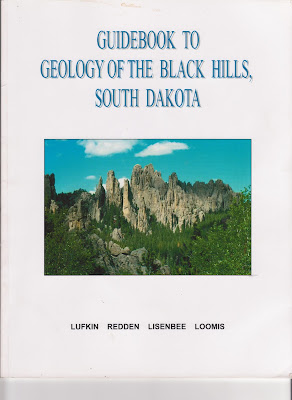 The book covers many of the old mines in detail, but one of particular interest is the Tip Top mine near Custer.  The pegmatite exposed in the workings has produced at least 92 minerals, 12 of which call the mine their type locality and seven of which are endemic to the TipTop.  Mining for tin at the Tip Top commenced in the 1880s but was a fizzle.  In the first half of the 20th Century the Tip Top was mined for various varieties of feldspar and in the early 1980s beryl was produced (Lufkin and others, 2009).  Today the mine is leased by Tom Loomis (www.dakotamatrix.com), one of the authors of the geology book noted above.

The amazing “thing” about the Tip Top, besides the 92 known minerals, is the large number of microscopic minerals coming from the “?hydrothermally altered beryllium and phosphatic rocks” (Lufkin and others, 2009)—it is a micromounter’s paradise.

I have a tenacity to pick up minerals from the Hills if I see such offered by dealers (at a reasonable price).  A couple of years ago, when perusing the smaller venues at Tucson, I nabbed a small specimen of the above mentioned hureaulite [(Mn,Fe)5(PO4)2(HPO4)2-4H20] collected at the Tip Top.  At least I believe it is hureaulite as well as some other unidentified minerals!

Although hureaulite can appear in a number of colors—red, many shades of white, brown, yellow—pink to red seems to be the dominant color (i presume manganese is the chromophore).  Although some specimens display nice crystals---see MinDat---others are composed of compact masses of indistinguishable crystals.  They range from transparent to translucent and are quite brittle (know from experience).  The hardness is ~5 (Mohs) and the mineral displays a less than vitreous to greasy luster.

MinDat notes that hureaulite is associated with triphylite and is probably a secondary weathering product of the mineral.  Triphylite is a fairly common lithium iron phosphate in solid solution with lithiophylite, a lithium manganese phosphate.  Both, along with the common apatite, are primary phosphates crystallizing from late stage magmatic solutions.  Hureaulite is a secondary mineral forming in low temperatures from the oxidation (weathering in the presence of water) of the primary minerals.  It seems as if water removes the lithium from the primary minerals and leaves behind the iron and manganese.

So, a long ago college trip to the Black Hills was the initial stage of my fascination with the western part of South Dakota.  I did not direct my life.  I didn’t design it.  I never made decisions.  Things always came up and made them for me.  That’s what life is. (B.F. Skinner)