I had the opportunity to spend part of the 1966 summer doing some geological field work out near the southern end of the Black Hills and adjacent plains.  It was a great experience: mapping some units, collecting fossils, an occasional Fairburn agate, and simply enjoying the “great outdoors.”

Some of the interesting features of the area included the small streams that sometimes broke through the upturned “hogbacks” and drained the interior Hills. One of these streams was Lame Johnny Creek draining part of Custer State Park and then emerging from the Hills southwest of Fairburn (home of the agates) and north of Buffalo Gap.  It is a beautiful small valley, quite green in the spring and early summer, and has some nice rock exposures.
I was curious about Lame Johnny and asked one of the local ranchers about derivation of the name.  What came out was something like “well sit down son; I have a story to tell you.  Maybe, just maybe, when you’re out there looking for those fossils you just might find the lost gold.”  Well, that piqued my interest (I was a poor graduate student) and I started exploring and have continued to look--for the last 48 years!  Seems as though Johnny was a two-bit horse thief who was born with the name Cornelius Donahue in Philadelphia sometime around 1850, and ended up in the Black Hills, via Texas (questionable unsavory past down there), about 1876.  Upon arriving in the Hills, Cornelius, who was now John Hurley and had acquired a limp from an accident or disease, was stuck with the nickname Lame Johnny or Limpin’ Johnny.  It seems, from the old newspaper accounts, that Johnny was blamed for a number robberies and horse and cattle thieveries. Some newspaper accounts even talk about “his gang.”  However, that is open to speculation.

According to “lost treasure lore” Johnny and his gang decided to hit the Monitor, an iron-clad wagon on wheels that hauled valuables for the Homestake gold mine near Deadwood---probably not a good idea to tweak the region’s 900 pound gorilla.  What does seem true is that someone did rob the Monitor of several hundred pounds of gold, plus diamonds and other jewelry (why were they hauling diamonds out of Deadwood?), and hard currency.  The robbery took place at Canyon Springs Stage Stop south of Deadwood where the heisters simply waited for the Monitor to arrive and then shot the crap out of the wagon and guards.  After a big reward was offered by Homestake, every “Tom, Dick and Harry” (and several others) were scouring the Black Hills and beyond.  It seems as ole Johnny was a suspect so when apprehended around the South Dakota-Nebraska state line in “Indian Country” (vernacular of the day) he was put on the stage, with a lawman, heading to Deadwood.  Near Buffalo Gap (a really big gap in the hogbacks of the Black Hills, where Beaver Creek flows out to the plains) one of the roving "regulator groups" (better to read vigilantes and treasure hunters) stopped the stage, took Johnny off, and threatened to string him up from the nearest tree if he did not rattle off the location of the Monitor’s gold (some of the cache had been previously recovered by Homestake.  How, I don't have the slightest clue!).  Johnny did not give them the information, perhaps because he really did not have the location (more later).  So, poor ole Johnny was taken to a tree and sent straight to hell.  The regulators then continued, for many years, to scour the countryside looking for Lame Johnny’s gold--and they are still looking today (not the original group of course :).  Unfortunately for both Johnny and the lynchers, he was telling the truth.  It seems as though one Charles Carey masterminded the robbery of the Monitor.  Unfortunately for Mr. Carey, he also met his demise at the end of a rope near Newcastle, Wyoming at Jenny Stockade. Records seem uncertain if other “posse” members caught up with him or perhaps he was relieved of his gold by other “not so nice” characters (regulators) looking for the gold. 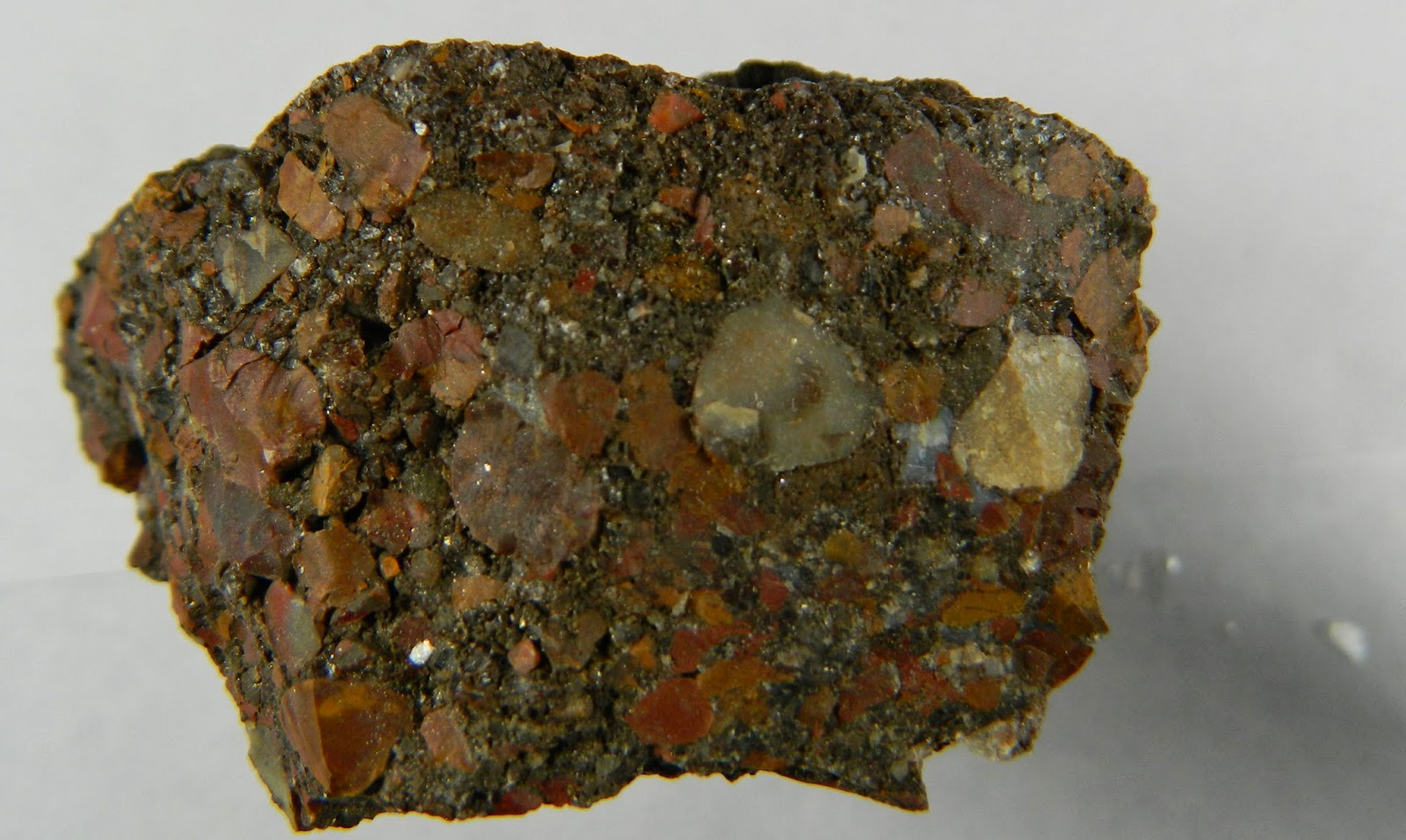 OK, back to Lame Johnny who lives on today in the form of Lame Johnny Creek. As it breeches the hogback the small stream cuts through a Cretaceous rock unit called the Inyan Kara Group.  Included in the Group is the Lakota Formation that the US Geological Survey describes as: Yellow, brown, red-brown, gray to black silty shale, pebble conglomerate, and massive to thin-bedded, cross-bedded sandstone. The magic term here is pebble conglomerate for some of this conglomerate is actually a jasper puddingstone.  This simply means that the jasper pebbles (in this case red) are not touching each other and scattered throughout the tightly-cemented sand matrix.  So, what looks like a rather nondescript “leaverite” takes a wonderful polish and is a beautiful stone.  I do not see many cabochons cut from this puddingstone (perhaps most cutters are unaware of the stone); however, some of the large freeforms are quite nice.
SOME TRIVIA: John Owen, an English theologian, told a group at Oxford University in 1657: our critical situation and our common interests were discussed out of journals and newspapers by every Tom, Dick and Harry (O’Conner and Kellerman, 2007).  That seemed to open the door for other writers, actors and everyday people and I grew up with the phrase (my mother commonly prefaced it by “every damm….”).

Some newspaper accounts (see Rapid City Journal, January 2, 2011, Steve Miller; www.rapidcityjournal.com) suggested Big Nose George Parrot (a well-known “badman”) was somehow involved with the Monitor heist.  That seems open to speculation; however, the Journal did report on the demise of Big Nose: Big Nose George got away but was captured in Miles City, Mont., in 1880 and taken to Rawlins, where he was found guilty of murder and sentenced to hang on April 2, 1881, according to an account at the Carbon County Museum. But on March 22, Big Nose George tried to escape, nearly killing the county sheriff before the sheriff’s wife and his sister arrived and forced George back into a cell.
That night, vigilantes seized Big Nose George and hanged him from a telegraph pole.  An attending physician, Dr. John Osborne, took Big Nose George’s body and cut off his head to examine the skull. Osborne gave the skull cap to a 15-year-old assistant, Lillian Heath, who later became a physician in Rawlins and used the skull cap as a doorstop for many years. Dr. Osborne also skinned Big Nose George’s body and had the skin made into a medicine bag and a pair of shoes.  Osborne wore the shoes to his 1892 inauguration as governor of Wyoming and later was elected to Congress.

Lame Johnny’s body was left hanging in shackles and was finally buried under the “hangin’ tree” by members of a passing freight convoy. At a later time his body was exhumed (probably not very professionally) and the shackles removed.  These lovely reminders of tough times in days gone by are in the South Dakota Historical Museum and the Custer County 1881 Courthouse Museum.  Rumor has it that “someone” also nabbed his head from the body—current location unknown.

According to local lore, at one time Johnny’s wooden grave marker read something like:
Pilgrim Pause!
You're standing on
The molding clay of Limping John.
Tread lightly, stranger, on this sod.
For if he moves, you're robbed, by God.

Did you ever see the 1967 movie, The War Wagon, starring John Wayne and Kirk Douglas?  Rumor has it that the the "War Wagon", shown below, and used in the movie to haul gold for the "badguy" was modeled after the Monitor.

The Monitor from the Homestake was named after the iron-clad Civil War ship--see POST: The U.S Civil War and Utah Landscape on May 3, 2012.

For additional information on early-day Custer, see my Post:COLORADO CAVALRY: WM. E. THOMPSON on October 2013.  This Blog also contains numerous other posts about the geology of the Black Hills. 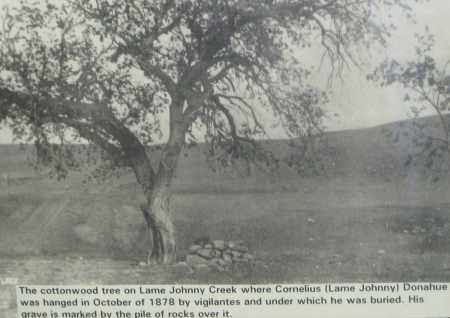 This photograph hangs in the museum at Custer.  The grave of Lame Johnny, north of Buffalo Gap, has long melted into the prairie.  The museum also has one of his shackles and a piece of the “hangin’ tree.”  Photo from www.Southdakotagravestones.org.