In doing some research on a previous posting describing the mineral greenockite, my mind started to wander as I began to daydream about the aptly named “six degrees of separation.”  This theory postulates that anyone on the planet can be connected to any other person on the planet through a chain of acquaintances that has no more than five intermediaries (Karinthy, 1929).  The idea is similar to “the friend of a friend of a friend…” and Karinthy wrote: a fascinating game grew out of this discussion. One of us suggested performing the following experiment to prove that the population of the Earth is closer together now than they have ever been before. We should select any person from the 1.5 billion inhabitants of the Earth – anyone, anywhere at all. He bet us that, using no more than five individuals, one of whom is a personal acquaintance, he could contact the selected individual using nothing except the network of personal acquaintances.

By 1961 a wide variety of groups begin to embrace the idea---mathematicians (trying to empirically prove the theory), psychologists (people who consider themselves fortunate cultivate larger networks), computer programmers (punching thousands of those IBM cards trying to write programs explaining the idea), screen writers and especially those pop culture icons---college students!   Three students (in1994) at Albright College (Reading, Pennsylvania) developed a game that morphed into “Six Degrees of Kevin Bacon”---an attempt to link any actor to Kevin Bacon in six connections or less. The Bacon Number of an actor is the number of degrees of separation he or she is from Mr. Bacon. The higher the Bacon Number, the farther away the actor is from Kevin Bacon.

This Bacon Number is an interesting phenomenon!  Readers should go to www.oracleofbacon.org to “play along.”  Some of us of a certain age may remember a character actor by the name of Gabby Hayes, famous as the sidekick of Roy Rogers and for uttering such phrases as "yer durn tootin.”  OK, I plugged Hayes’ name into the Web site and came up with a Bacon Number of 3!
Gabby Hayes was in:
Man of Conquest (1939) with Ethyl May Halls
Halls was in An Act of Murder (1948) with Eda Reiss Merin
Merin was in Enormous Changes at the Last Minute (1983)
with Kevin Bacon

Now, I have not succumbed to the short, gray days of winter and lost part of my senses (I use bright natural daylight [5000k] light bulbs).  But, this is a geology Blog so how do minerals correlate with a Bacon Number?  Probably nothing, but I was again wandering the other day and thinking about the obscure relationships between some minerals—maybe I should develop a Werner Number (named for the Father of Mineralogy).  For example, using calcite (CaCo3) as the center point (the Bacon?) what is the Werner Number of dolomite [(CaMg(CO3)2]?  I guess the answer is one since calcite contains calcium as does dolomite.  Well, relating minerals via their chemical content is probably a bad idea---pretty dull.

OK, what about the relationship of greenockite [CdS], a cadium mineral that was the subject of a recent posting, stromeyerite  [AgCuS] a silver copper sulfide mineral, and eudialyte, an extremely complex silicate  (without Cd or S).  The simple answer for the first two minerals would be the presence of the element sulfur in both minerals.  The interesting answer: the element cadmium was discovered by the chemist Friedrich Stromeyer (Germany) in 1817.  This discovery allowed later scientists to determine of the composition of, and name, greenockite.  In turn, Stromeyer later (1819) named the mineral eudialyte, and, in 1832, the mineral stromeyerite was named to honor the chemist. So, cadmium, greenockite, eudialyte, and stromeyerite all have a relationship to Friedrich Stroymeyer--whoda thought?
After writing this little tidbit I decided against the idea of pushing the Werner Number and stick instead to writing about other obscure facts.  But, it was fun while it lasted, and especially when you don’t really need to worry about the ifs, ands and buts!

Life’s short.  Anything could happen, and it usually does, so there’s no point in sitting around thinking about all the ifs, ands and buts.
Amy Winehouse

Friedrich Stromeyer (1776-1835) was a German chemist who graduated from the University of Gottingen.  He studied under Dr. Johann Gmelin, Professor of Medicine, Chemistry, Botany and Mineralogy.  A gentleman with a wide range of interests, Gmelin published textbooks in a number of fields including the 13th Edition of Systema Naturae (Carl Linnaeus) and Natursystem Des Mineralreiches 1778 (Natural System of the Mineral System according to my magic Google translation).  Stromeyer’s co-doctoral adviser was the French professor Louis Nicolas Vauquelin who just happened to be the chemist credited with discovering the elements beryllium and chromium. Great education!

And in another bit of serendipitous discovery, the American Mathematical Society currently maintains a website (www.genealogy.ams.org) entitled Mathematics Genealogy Project---sort of a “Six Degrees of Kevin Bacon” project.  Stromeyer had three doctoral students who had students and advisees who had…..etc.  The end result is that Friedrich Stromeyer has 2149 descendants!  With a little time, and interest, one could figure out the “Bacon Number” of each of these descendants.  Wow.  Learning is fun. 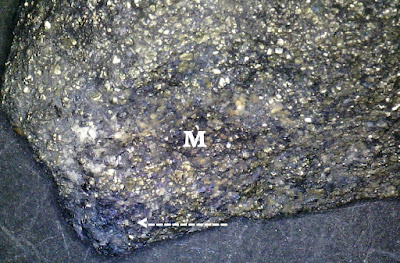 OK, back to the minerals.  Several years ago at the Denver Show I picked up a specimen of “stromeyerite, bornite, chalcocite and pyrite” with good provenance data:  “11 stope, 3100 feet level, Campbell mine, Bisbee, Cochise County, Colorado.”  I made the purchase trying to supplement my small collection of less well-known minerals containing silver---stromeyerite is a silver copper sulfide. The specimen is composed of massive stromeyerite that ranges in color and luster from a metallic dark gray weathering to a dark blue to a shiny steel gray on fresh surfaces.  Two of the more distinguishing characteristics, at least for me, were the conchoidal fractures and the softness (~2.5); it is easily “scratchable.”  However, the blue color on weathered surfaces distinguishes it, I think, from similar appearing chalcocite. Although there are patches of iridescent bluish bornite, it is different in appearance from the blue stromeyerite.  There are numerous blobs of chalcopyrite (soft) and pyrite.   A few crystals of calcite were also noted.  According to MinDat, stromeyerite forms in areas of hydrothermal activity where silver replaces copper in bornite.  I believe it also may replace chalcocite, sphalerite and galena.

So that’s the skinny, as far as I know, on stromeyerite.   In Colorado, stromeyerite has been a major source of silver in many mining areas, yet it does not seem to be a “common mineral” as I observe “minerals for sale” websites.

For my part I know nothing with any certainty, but the sight of the stars makes me dream.    Vincent Van Gogh

Karinthy, Frigyes, 1929, Chain-Links. Translated from Hungarian and annotated by Adam Makkai and Enikö Jankó.
Posted by Mike at 2:43 PM No comments:

CONTINUED: PART II
OK, so the zinc-copper cations may substitute for each other but what about the arsenate radical?  As noted in other Blogs (and numerous professional publications by mineralogists) the PO4 and AsO4 radicals are about the same size and with similar electron configurations and do substitute for each other in the Olivenite—Libethenite Series Cu2(AsO4)(OH)---Cu2(PO4)(OH). 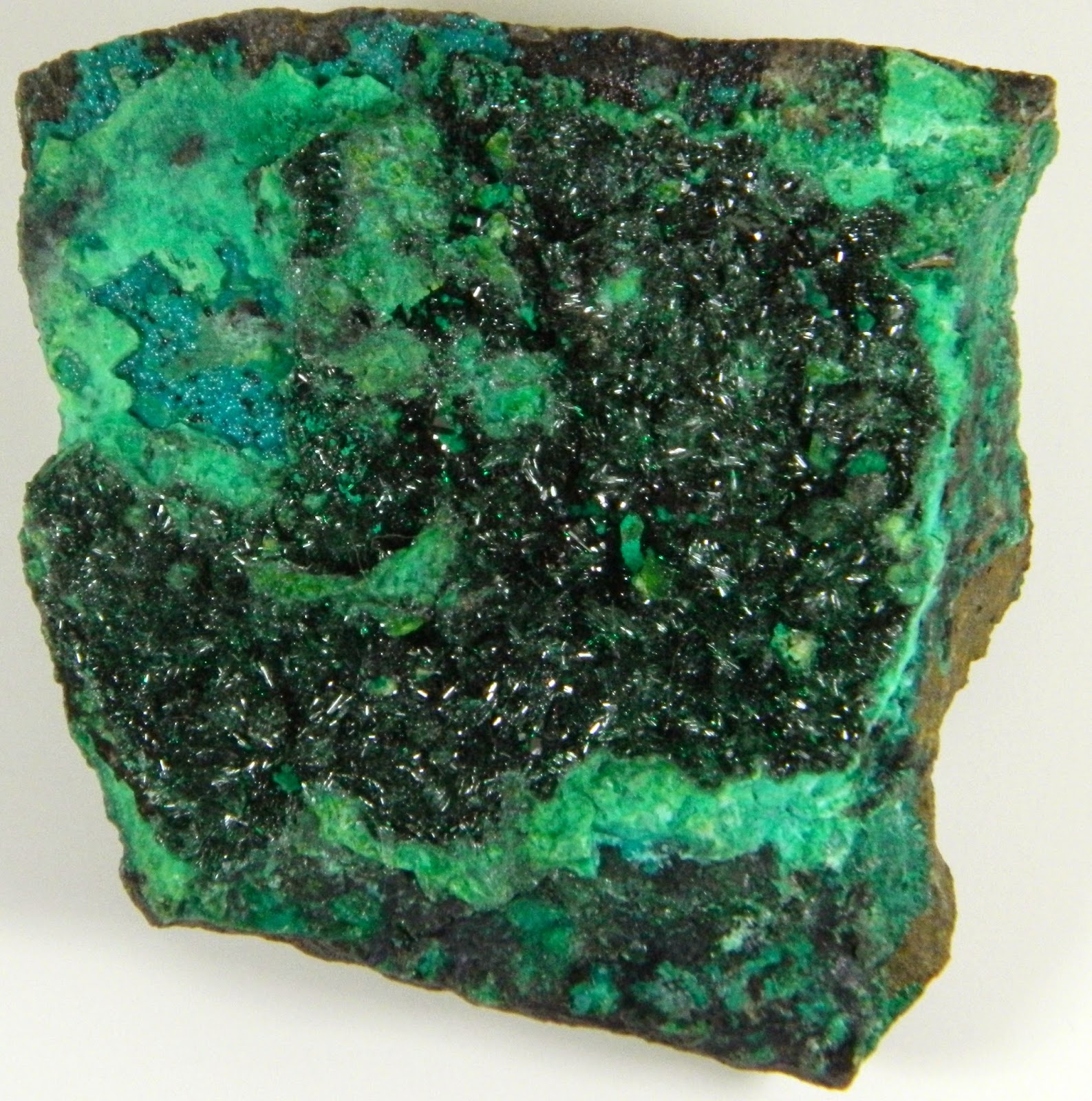 Libethenite then has the arsenate radical (of olivenite) replaced by PO4 and the crystal symmetry has changed to Orthorhombic to Monoclinic.  It is a rather rare/uncommon mineral but again is found as a secondary mineral in the oxidation zone of copper ore deposits.  Some unnamed copper mineral supplies the copper while the phosphate is usually derived from the weathering of apatite or perhaps monazite or xenotime (rare earth phosphates) (MinDat.org). Cuprian adamite, Mapimi, Mexico.  Width FOV ~7 cm.
I have three different specimens of Libethenite displaying beautiful green (often emerald-green or olive-green), crystals with a vitreous luster that are translucent to transparent.  Although they have a hardness of around 4.0 (Mohs), individuals are quite brittle and fracture rather easily.  One specimen from near Ray, Arizona (Ray Mine), has sort of squat/equant crystals with some wedge-shaped terminations.  A second specimen from Morenci, Copper Mountain District, Arizona, has small sprays of elongated prismatic crystals.  The third, from near Lordsburg, New Mexico , is a large specimen (5.5 x 6.0 cm) with one side covered with a mass of individual, acicular, striated, bladed and terminated crystals---a really gorgeous specimen.

As far as I can determine, there are no officially recognized intermediate minerals in the Olivenite-Libethenite Series.
Cornwallite, also a copper arsenate [Cu5(AsO4)2(OH)4 [see Blogs January 3, 2015 and June 8, 2014], has an isostructural relationship (is in a series) with the phosphate pseudomalachite [Cu5(PO4)2(OH)4].   That is, they have the same crystal structure (both are Monoclinic) but different chemistries—the phosphate and arsenate radicals.  I cannot find evidence of an intermediate member in this series.


Cornwallite is a secondary mineral found in the oxidized zones of copper sulfide deposits where the ores contain both arsenic and copper and perhaps oxidized from something like tennantite (Cu12As4S13) or enargite (Cu3AsS4).  Most cornwallite occurs as botryoidal to globular crusts of microcrystalline radiating fibers.  The dominate color is essentially an emerald green.
Pseudomalachite is commonly a blue-green to emerald-green, usually compact or botryoidal, mass of non-descript and microscopic crystals. It has a hardness (Mohs) of 4.5 or less, and has a variety of habits: “commonly compact radiating and spherical, may be fibrous, in paintlike crusts and films, botryoidal, massive” (Handbookofmineralogy.com); and crystals in microscopic prismatic radiating clusters. With a strong light and magnification, the botryoids are translucent to transparent and have a vitreous luster.


Pseudomalachite is a secondary phosphate found in the oxidized zones of copper ore deposits, at times in association with true malachite [Cu2(CO3(OH)2].  The botryoids of pseudomalachite appear visually similar to botryoidal malachite; however, this type of malachite usually displays light and dark green banding.  In addition, as a carbonate, malachite will react to hydrochloric acid.
So, this is today’s contribution to my elementary understanding of mineral series and nice green arsenates and phosphates.  It is not anything earth shattering, but I enjoyed the learning aspect!
You can only do your best.  That’s all you can do.  And if that isn’t good enough, it isn’t good enough.            Imelda Staunton
REFERENCES CITED
Braithwaite, R.S.W., 1983, Infrared spectroscopic analysis of the olivenite-adamite series, and of phosphate substitution in olivenite: Mineralogical Magazine, v. 47.
Chukanov, N.V., D.Y Pushcharovsky, N.V. Zubkova, I.V. Pekov, M. merlina, S. M