DON'T ASK ME ABOUT FORMATTING GLITCHES AS BLOGGER DRIVES ME CRAZY :)


﻿
One of the sad things about aging is that your mind becomes “full” and it becomes tougher to remember “things”.  But, there is a way to cope with this malaise and that is to rid your mind of “facts” that are no longer of use.  For example, I have not used the "first fundamental theorem of calculus” for decades.  At least not since  my calculus class back in the early 1960’s.  So, a few years ago I woke up one morning and made a decision:  I was shoving the “first fundamental theorem of calculus” out of my mind in order to make room for other facts.  It was a rational decision and I was very pleased with myself as I now had space left for other pertinent facts.  Hum, what to do with all those free mb’s?  As I drove down the road thinking about this free space, I suddenly wondered about the number of fence posts in a mile of Interstate and so I counted them up.  Then I wondered about the possibility of estimating the number of theoretical fence posts along I-70 from Baltimore to the Pacific Coast.  A little mental gymnastics brought me to a really large number that I carried around for a few years until ZIP, out it went.  That cleaning of my mind left room for several smaller items--such as "tea pigs", something that I commonly saw in the tea shops during my recent visits to London.  Turns out Teapigs is a brand name for a company specializing in high quality, whole tea leaves in a biodegradable bag.  It has nothing in common with the porcine side of food.


It turns out that I am just a collector of facts, many of them rather mundane (see teapigs), some are only of interest to a few like-minded compatriots.  For example, English workers believe they have discovered the bones of King Richard III (b. 1452) who perished in 1485 at the Battle of Bosworth Field.  The British, always attuned to their heritage, have found a direct descendent and plan on a DNA analysis.  I eagerly await results but am certain most people in the US really don’t care.  However, that is OK as my career as collector of mundane facts keeps my mind occupied (and is more interesting than working with a calculus theorem).  COMMENT:  TODAY, 4 JANUARY 2013 THE BRITISH PRESS ANNOUNCED THAT THE SKELETON WAS INDEED THAT OF RICHARD III.  NOW THAT IS EXCITING!

Another facet of mundane facts it that sometimes their discoveries lead to further exploration and study.  For example, while wandering through Westminster Abbey the other day something my eye caught triggered a question in my mind---why would the Brits bury an agnostic in a holy house?  I asked a couple of the docents but no luck with a decent answer.  Ah ha, a quest to discover had begun; the question being why would Charles Darwin be interred in a prominent location in this famous church.

It seems that Darwin was honored in death for his many scientific achievements rather than any deathbed conversion to Christianity (rumor debunked by his daughter) or accomplishments in religion.  When Darwin died in 1882 of heart failure his family intended his interment take place in  St. Mary's Cemetery at Downe (now metro London).  However, Darwin's scientific colleagues (and some parliamentarians [MP] and friends), lead by the mathematician and President of the Royal Society William Spottiswoodde, petitioned the Dean of Westminster to allow the burial in cathedral.  Although at the time this event did not please all citizens, I thought perhaps there were more "wicked" persons among the 3500 interments!


The official Westminster Abbey records (www.westminster-abbey.org)    states: The Dean of Westminster, George Granville Bradley, was away in France when he received a telegram forwarded from the President of the Royal Society in London saying “…it would be acceptable to a very large number of our fellow-countrymen of all classes and opinions that our illustrious countryman, Mr Darwin, should be buried in Westminster Abbey”. The Dean recalled “ I did not hesitate as to my answer and telegraphed direct…that my assent would be cheerfully given”. The body lay overnight in the Abbey, in the small chapel of St Faith, and on the morning of 26 April the coffin was escorted by the family and eminent mourners into the Abbey. The pall-bearers included Sir Joseph Hooker, Alfred Russel Wallace, James Russell Lowell (U.S. Ambassador), and William Spottiswoode (President of the Royal Society).


After being duly impressed with Darwin's burial site I was really excited to observe the final resting place of Darwin's friend Charles Lyell (d. 1875). In all those years of teaching Historical Geology, the class always spent much time trying to understand the significance of Lyell's multi-volume book, Principles of Geology.  This tome was responsible for bringing geology into the modern world by firmly explaining and advocating James Hutton's ideas on uniformitarianism.  Before Hutton and Lyell (and Playfair) came along the idea that catastrophic events shaped the earth was the prevailing scientific doctrine.  Hutton, with Lyell doing most of the explaining, offered the idea that "everyday", reoccurring events functioning at the same rate as in the past were responsible for shaping the earth.  This Doctrine of Uniformitarianism has been affectionately known by generations of geology students as The Present Is The Key To The Past.  To understand the past, study the present! 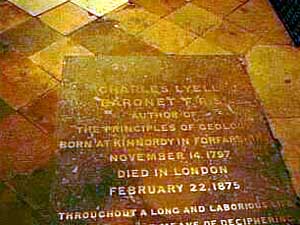 In contrast to Darwin's simple grave inscription, Lyell's tribute, written by the famous British anatomist T. H. Huxley (a strong advocate of the work of Charles Darwin) reads:  CHARLES LYELL BARONET F.R.S. AUTHOR OF “THE PRINCIPLES OF GEOLOGY” BORN AT KINNORDY IN FORFARSHIRE NOVEMBER 14 1797 DIED IN LONDON FEBRUARY 22 1875. THROUGHOUT A LONG AND LABORIOUS LIFE HE SOUGHT THE MEANS OF DECIPHERING THE FRAGMENTARY RECORDS OF THE EARTH’S HISTORY IN THE PATIENT INVESTIGATION OF THE PRESENT ORDER OF NATURE ENLARGING THE BOUNDARIES OF KNOWLEDGE AND LEAVING ON SCIENTIFIC THOUGHT AN ENDURING INFLUENCE. “O LORD HOW GREAT ARE THY WORKS AND THY THOUGHTS ARE VERY DEEP” PSALM XCII.5”


And, as icing on the cake, the grave marker was quarried from a fossiliferous Carboniferous limestone.  I was able to kneel and observe all of the small fossils!


To complete the fantastic day I located, among all the queens and kings and prime ministers and soldiers etc., the final resting place of Isaac Newton (d. 1727)--not far from Darwin.

The Book Cliffs are one of the most recognizable landforms in western Colorado and eastern Utah .  For about 200 miles this escarpment extends from where the Colorado River descends south through DeBeque to Price Canyon near Price, Utah.  The lower slope exposes marine shales of the Cretaceous Mancos Shale while interfingering sandstone beds of the upper Mancos and overlying Mount Garfield Formation (generally referred to as the Mesa Verde Group or Formation) were deposited in fluvial (stream), swamp, flood plain, and near shore marine environments.  The sandstone units capping the cliffs are fractured with vertical joints that reminded some long forgotten person of a row of books.  In the area of economic geology, the Book Cliffs contain important reserves of coal.  Positioned on top of the sandstone, but usually situated back from the edge, are various early Tertiary rock units, for example the Green River Formation and the DeBeque Formation.

The Mancos Formation and its stratigraphic equivalent to the east known as the Pierre Shale, often contain concretions.  Many times these concretions are quite fossiliferous while others contain beautiful crystals of barite and/or calcite.  For example, concretions weathering from the Pierre near Wasta, South Dakota (east of Rapid City), yield a variety of cephalopods in addition to spectacular crystals of golden barite.  Many years ago our field trip leader took us to a Mancos locality on the east side of the San Rafael Swell south of Price, Utah, where participants collected a variety of clams and cephalopods.  Although rare, concretions in the Pierre near the Kansas-Colorado state line along the Smoky Hill River give up some nice barite and calcite crystals.  However, some of the most spectacular barite crystals are those collected from concretions in the Mancos Shale in the Book Cliffs near Grand Junction, Colorado.

I decided to hunt the exposures near Grand Junction during a camping trip to Colorado National Monument (one of my favorite places southwest of town).  I had been there years before hunting for fossils but this time checked with a local rock shop about prospective collecting sites.  The employee essentially directed me north from Grand Junction on gravel/dirt roads until the trails stopped and public land was available.  I then begin to hike up the slope banging on concretions as I found them.

It was not long before it became apparent that perhaps I was not the first collector to bang on the rocks—most concretions were cracked and broken!  So, I checked my water supply and headed up the slope and away from the roads, still banging on the rocks.  The first thing that I noticed was that some of these rusty colored concretions were “really large", like 6-7 feet in diameter.  The second obvious item was the large number of straight-shelled ammonites, Baculites sps. weathering out of the concretions.  I collected a few and noticed that most were steinkerns, or internal molds, and they did not exhibit remnants of the external shell.  However, some of the specimens displayed nice suture lines.

The first crystals that I found were pieces of calcite, then lots of calcite!  But, I was looking for the spectacular water-clear crystals of barite, and they soon appeared.  These specimens are beautiful, usually prismatic, nicely terminated, gemmy, and water clear; however, some crystals with a yellow tint have been reported.  The ones that I collected were small, mostly less than 3 cm., but “nice”.

GEMMY, TERMINATED, WATER CLEAR BARITE CRYSTALS; HEIGHT OF SPECIMEN ~2.2 CM.
It is my understanding that the crystals have been collected for decades, but are still available for those collectors willing to take a little hike and bang on the rocks.