ARSENATES AND OTHER MINERALS FROM THE OJUELA MINE


An intransitive verb is an action verb, for example, suffer.  But if you stick an object with an action verb then the verb becomes transitive. A good example is Mike suffers (verb) pain (object) in the lumbar region of his lower back.


The dictionary tells me that pain is a basic bodily sensation induced by a noxious stimulus, received by naked nerve endings, characterized by physical discomfort.


Yep, I can agree about the pain. A condition called spinal stenosis is physical discomfort caused by narrowing of the lumbar spinal column that produces pressure on the nerve roots resulting in sciatica and a condition resembling intermittent claudication and that usually occurs in middle or old age. That is correct---it hurts to get old.


But, in today’s world there might be an opportunity to “fix” the stenosis and so it was I decided to undergo a bilateral lumbar laminectomy.  This procedure removed the back part (lamina) of the affected vertebra (L 2-4 in my case). A laminectomy is sometimes called decompression surgery because it eases the pressure on the nerves by creating more space around them.


And the leg pain sort of  disappeared.  In on Thursday out on Friday noon with nary a narcotic “pain killer” down my gullet after dismissal.  But there is the LBT—no lifting, bending, or twisting for several weeks.  Shucks, I can’t mow the lawn, shovel snow or lift a large bag of taters. However, a simple twist yesterday just about sent me through the roof.


But, the state of being weary and restless through lack of interest, also known as boredom, has struck.  It might not have stayed except a giant back brace (24/7 for 6 weeks) makes my desk chair rather uncomfortable.


So, time to bite the bullet.  Bite it really hard since I dug out a box of specimens from the Ojuela Mine (Mexico) tucked away marked "arsenates" but containing little other information.  I had picked these up from a dealer at Tucson a couple of years ago and had stuck them in the “To Do” box.  So out they came, and a couple were really tough to decipher for an ole soft rock person.


The Ojuela Mine in the Mapimi District, Durango, Mexico, is a polymetallic mine (mostly gold, lead, silver, zinc) with mineral formation in Mesozoic carbonates.  Although the mine produced a variety of metallic ores, it is best known for other reasons: 1) Santiago Minguin, the designer of the Golden Gate Bridge, executed the design and construction of a suspension bridge to the mine that is 1043 feet in length and anchored by two end towers; 2) beginning in the 1940s specimen mining started producing magnificent examples of adamite, paradamite, scorodite  and hemimorphite---some of the best in the world.  The mine has produced over 100 different minerals and is the type locality for six minerals.  It seems to be especially rich in arsenate minerals.


So, on to my specimens. One was a piece (~4.5 x 8.0 cm) of limonite/goethite with several beautiful, butterscotch-colored, blocky crystals of the lead molybdate, wulfenite, perched on the surface.  This was an easy one to identify, although it was not an arsenate. Shucks. 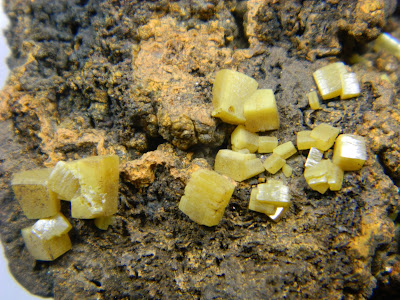 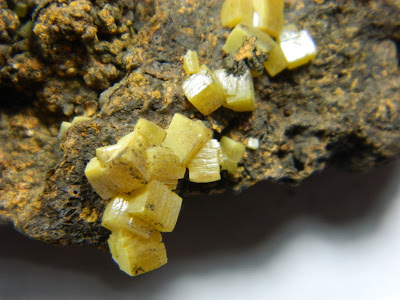 The next jewel in the box (~3.0 x 3.5 cm) indeed was a calcium copper arsenate, conichalcite (with nice “little green balls), CaCu(AsO4)(OH).

Another two specimens (~1.7 x 1.0 cm and ~2.0 x 2.0 cm) took some sleuthing and I am not yet certain about the identification, but both are arsenates.  However, my guess is: 1) arsenbrackebuschite, a lead iron arsenate; and 2) the lead zinc arsenate, tsumcorite. Both are “microminerals.”


Arsenbrackebuschite is a rather uncommon mineral found in the secondary (oxide) zone of arsenic-bearing, hydrothermal lead-iron deposits.  The co-type localities are at the Tsumeb Mine in Namibia and the Clara Mine in Germany.  The polymetallic mines at Mapimi have produced my specimens.  In contacting the dealer at a later date, I was informed that the tiny, poorly formed crystals had been identified by XRD and confirmed my visual identifications.  But the mineral is rare at the Ojuela Mine.


Arsenbrackebuschite is yellow to amber to red brown in color with some well-formed crystals having a shiny (sub-vitreous) to waxy luster while mine are more earthy, maybe resinous--and very tiny and indistinct.  Some better formed crystals have a hardness of ~4.5 (Mohs) although it would seem impossible to measure the earthy variety. It is a tough mineral to identify as even mineral photos on MinDat.org are measured in millimeters.


If arsenbrackebuschite is tough to identify then a hydrated lead zinc arsenate, tsumcorite, is even more difficult.  Here the mineral has replaced the iron with zinc:  PbZn2(AsO4)2-2H2O.  Note that OH in arsenbrackebuschite is replaced by 2 water molecules in tsumcorite.  My chemistry is at an elementary level, but I believe that since the iron has a 3+ charge and zinc a 2+ charge then in order to balance charges it picks up an extra hydrogen.  I could really use some help from a reader more learned in chemistry! 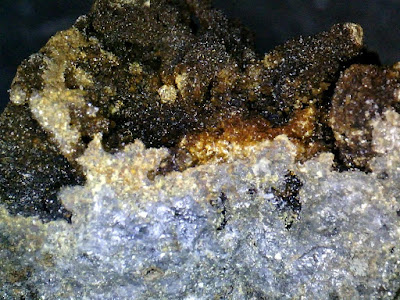 I have identified these clove-brown, microscopic crystals as tsumcorite.  Width field of view ~11 mm. 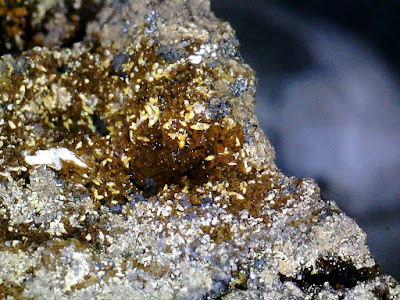 The type locality for tsumcorite is the Tsumeb Mine in Namibia and, in fact, the name comes from the mine owner—Tsumeb Corporation.  Again, this is one of those rare arsenates that is found in the oxide zone of arsenic-bearing, hydrothermal, polymetallic mines. It ranges from yellow-brown, clove brown, red-brown, or orange in color.  The tiny crystals are generally prismatic and elongated along the B-Axis, not the C-axis. These prismatic crystals often occurring in radiating spherules.  The hardness is ~4.5 (Mohs).  How did I identify these ting crystals? I broke off a couple and obtained a yellow streak (I think).  Minerals with a yellow streak are rare.  They also dissolved in hydrochloric acid.  Otherwise is was a wild guess.


Another non-arsenate mineral that popped up in the Ojuela specimens was chalcophanite, a hydrated, zinc-iron-manganese, manganese oxide [(Zn,Fe,Mn)Mn3)7-3H2O].  Again, chalcophanite is a common oxide mineral in polymetallic deposits.  However, it often is difficult to visually (as are many manganese minerals) identify since individual crystals are quite small. Crystals are often platey, soft (~2.5 Mohs), metallic opaque with a color ranging from dark blue to black. These tiny crystals often form a druse-like coating.

Perhaps the most beautiful specimen (~10 x 6 cm.) in my mixed box is a combination of gemmy hemimorphite crystals of all sizes and shapes scattered over a chalcophanite matrix.  Hemimorphite is a hydrated zinc silicate [Zn4Si2O7(OH)2-H2O] that occurs in a number of environments, colors, lusters, and for decades was confused with the zinc carbonate, smithsonite [ZnCO3].  The name comes from doubly terminated crystals where the terminations have different faces (hemimorphic development).  The crystals have a white streak, a vitreous luster, ~5 hardness (Mohs), are colorless and transparent to translucent, and come from the oxidized zone of zinc-bearing mineral deposits. With a zinc component of over 50%, hemimorphite is a minor ore of zinc.
The question, at least one of them, is the identity of some really microscopic mineral aggregates situated on the spherules of chalcophanite.  At one time or another I thought perhaps cerussite, hemimorphite, pyrolusite (but needles are not black), ojuelaite, and perhaps others.  It is a tough call and above my pay grade to make it!


I learned much from this little exercise, not the least of which is that submillimeter crystals are very difficult to photograph with my digital camera.  The second is that many arsenates have been discovered in the last 50 years and are relatively uncommon.  The third, life is good: learn to enjoy every minute of your life. Be happy now. Don't wait for something outside of yourself to make you happy in the future. Think how really precious is the time you have to spend, whether it's at work or with your family. Every minute should be enjoyed and savored.
Earl Nightingale
Posted by Mike at 9:08 PM No comments: