One of the big venues of the Tucson Shows is held at the Hotel Tucson City Center (HTCC).  The 292 vendors come from around the world and sell a variety of minerals, rocks, fossils, shipping boxes, books etc.  Unlike some venues, for example Kino, the vendors are selling treasures with a geology connection.  I believe these vendor standards are due to the promoter, Coloradan Marty Zinn.

Many of these HTTC vendors are selling high end minerals and fossils.  For example, Joe Dorris from Colorado Springs had some great specimens of amazonite and smoky quartz pulled from his discoveries near Lake George west of the Springs.  Other dealers sold a variety of very fine, museum-quality, dinosaur casts.  If buyers wanted the “real thing” Glen Rockers of Hays, Kansas, offered some very nice vertebrate fossils he collected from the Smoky Hill Chalk Member of the Niobrara Formation (Cretaceous).  Rockers collects on private land in western Kansas; therefore, the collection of vertebrate fossils is quite legal.  It is only on public land that the collection of vertebrate fossils is illegal.

Before leaving for Arizona and the Tucson Shows I received my copy of Rocks and Minerals and was delighted the issue centered on “blue minerals” to correspond with the theme of the main Tucson Show.  One of the magazine articles was a description of the mineral carletonite, a new one for me [KNa4Ca4Si8O18(CO3)4(OH,F)-H2O].  I noted it was such a gorgeous royal blue color but sort of put it aside in my mind as I saw descriptions such as rare, expensive, and “finding a fine specimen of carletonite today is nearly impossible.  And the outlook for the future is not promising…” (Pohwat, 2016). 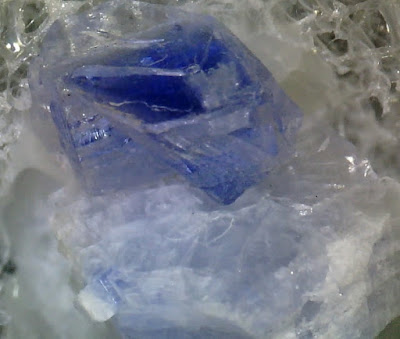 Carletonite was originally described as UK15 (for unknown) and was not named until 1971.  The mineral is only known from one locality, Poudrette Quarry Mt. Saint-Hilaire, in Canada.  The quarry has been off limits to collectors for several years and the main collecting pegmatite for carletonite is now flooded; therefore, with encouragement like that I did not expect to even see crystals of carletonite, let along see specimens for sale in my price range.  To my great surprise, as I was strolling along the motel rooms, I stopped to observe some “sale specimens” of a Canadian dealer.  Wow, there was a specimen of carletonite in my price range ($7).  It probably is not the best specimen in the world; however, it certainly qualifies as an interesting mineral in my collection since any specimens of carletonite on the market today come from older collections.

The colorful carletonite is that beautiful royal blue color although some crystals are colorless, pink or light blue. Many of the crystals are zoned with blue centers surrounded by colorless crystalline material.  This type of zonation may be seen in photos of my specimens.  The crystals range from transparent (colorless material) to translucent (blue material) and have a vitreous luster.  They are somewhat soft at 4.0-4.5 (Mohs) with a white streak.  The crystals (Tetragonal) tend to be prismatic although this feature is difficult to discern on smaller fragments.

Mont Saint-Hilaire is a fascinating mineral locality.  MinDat lists 404 valid minerals collected from the quarries with 63 of the species being first described from the locality.  What makes the locality so special? Powhat (2016) noted the dominant rocks at Mont Saint-Hilaire are feldspathoidal seyenite, an igneous intrusive rock composed of alkali feldspar, a feldspathoid, and accessory minerals. The feldspathoid minerals are usually sodalite (sodium aluminum silicate chloride) and nepheline (aluminosilicate of sodium and potassium).

Feldspathoid-rich rocks (wherever they occur) often produce a great variety of rare minerals, including carletonite.  A glance at MinDat will often amaze the rockhound since the list of minerals (the 404) is a lesson in “what in the world is that mineral?”  Besides the seyenite, carletonite also evidently occurs in metamorphosed siliceous limestone: marble (www.webmineral.com).