NATURAL BRIDGES NATIONAL MONUMENT: ANOTHER CHECK ON THE BUCKET LIST

Well, it was off from Bluff and Hovenweep heading north on U.S. 163 toward the community of Blanding where we had camping reservations.  The geology along the highway was pretty non-descript as the road was constructed on White Mesa where resistant sandstone of the Dakota Formation (Cretaceous) crops out and holds up the Mesa.  The only exciting feature was to look west at mighty Comb Ridge, the upturned package of rocks that define the eastern edge of the Monument Upwarp (described in Post  July 18, 2018).
Blanding is home to one of the nicest and most informative museums in the Mountain West.  Edge of the Cedars State Park is essentially a Museum that is dedicated to the Ancestral Puebloans (see Past postings), and later cultures. In fact, it contains the largest collection of Ancestral Puebloan pottery in the Four Corners Region.  According to Park information the Ancestral Puebloans lived in the area from around 825 A.D to 1225 A.D.

After getting our camp established it was time to take a short drive around the outskirts of Blanding to locate ruins in a wash (Big Canyon) just outside of town (on Ruir Road).  As a small town kid from Kansas I was amazed to see a small Ancestral Puebloan cliff dwelling "just sitting" there in a local drainage--the Westwater Ruins.  Amazing, at least for me.  As dessert, the Nation's Natural Bridge is nearby in the same drainage.  In western Kansas the area would be designated a state park!!


Then it was off to visit another of my Bucket List locations—Natural Bridges National Monument (NBNM).  Highway Utah 95 heads west just south of Blanding and picks up NBNM after about 30 miles.  At that junction Utah 276 heads southwest to Halls Crossing on the Colorado River while Utah 95 continues 85 miles northwest to Hanksville after crossing the Colorado River at Hite.  At any rate, it is best to fill the gas/diesel tank at Blanding!

The road starts out on the massive sandstones of the Dakota Formation (Cretaceous) holding up White Mesa; however, in some of the deeper gullies the softer shales and sands of the underlying Morrison (Jurassic) may be spotted. But there seems to be some action to the west, and that is our friend from down south, Comb Ridge, the eastern boundary of the Monument Upwarp.

But before cresting Comb Ridge take a really good short side trip and examine Butler Wash Ruins, well marked with a sign, just as you are starting up the ridge.
Although Comb Ridge has been noted in previous Postings (July 18, 2018) the Utah 95 road cut through the Ridge offers the most impressive views of the entire stratigraphic section.  As Utah 95 leaves the Blanding area traversing the Dakota Formation it slowly gains elevation and, the rocks get older as one approaches Comb Ridge in about 14 miles. Rather suddenly the Jurassic Navajo Sandstone appears and is easily identified by the sparse vegetation and light orange color complete with massive crossbeds. The highway climbs on the Navajo until it goes through the roadcut and reaches the summit of the Ridge.  Here the panorama opens with views to the north and south displaying the geologic section while the view to the west looks toward the crest of the Monument Upwarp. 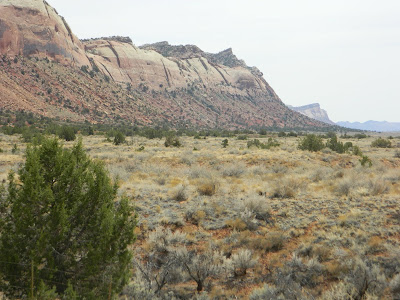 Comb Ridge is the eastern boundary of the Upwarp, and rock layers plunge steeply to the east; geologists refer to this type of structure as a monocline. At one time the rocks exposed at Comb Ridge covered the area occupied by the Upwarp.  However, Laramide compression from the west, caused by subduction of oceanic plates under the continental plate, begin to push/squeeze rocks “up” into this large anticline we know today as the Monument Upwarp.  As the same time as uplift (and part of) a large deep-seated fault (paralleling what is now Comb Ridge) pushed the rocks on the west higher than those on the east.  In many/most cases the rocks layers would rupture/break along the fault.  However, this particular fault never reached the surface (a blind fault) and the rock layers “simply” draped over the fracture and sloped to the east.  Later in the Eocene the entire Colorado Plateau was uplifted as a single cohesive unit and erosion started to remove overlying rock layers.  By the late Tertiary (~6 Ma.) erosion was in full swings with local streams carrying huge loads of sediments to the Master Stream, the Colorado River.  Sometime in the recent past (30 ka?) stream action along Comb Wash eroded away hundreds of feet of rock and created the steep cliffs along the west side of the current Comb Ridge.

After going through the road cut and winding down to Comb Wash it is time to pull over, get out of the vehicle and simply take in the scenery of the cliffs at Comb Wash.  It is an experience not to be forgotten.  In just standing there I remembered something Sylvia Plath (American author and poet) once said.  Actually, I only remembered her saying something about breathing in the fresh air and needed to look up the entire quote: I felt my lungs inflate with the onrush of scenery—air, mountains, trees,... I thought, this is what it is to be happy.

So, then it was off down the road to continue the journey to NBNM and Bears Ears National Monument.  In driving along Utah 95 it was quite difficult to determine if we were actually in the Monument or had traveled over the boundary.  The creation, but later dismantling of Bears Ears, is one of the saddest episodes in the history of our revered national parks and monuments.  The Monument was created in December 2016 and reduced in size by 85%, by Executive Order, a year later. The original Monument protected one of the most significant cultural landscapes in the United States with thousands of known archaeological sites.  It also protected numerous areas that are spiritual significant to Native Americans of many cultural tribes.  Geologists and other visitors are attracted to the area due to the ruggedness and spectacular beauty of the canyons, mesas, cliffs and highlands.  History will judge this embarrassing episode rather poorly as we continue to degrade the environment and landscape, and allow destruction of our cultural history.
Along the way across Cedar Mesa another roadside stop of interest was approaching—more Ancestral Puebloan ruins at a locality termed Mule Canyon.  There is a small parking area off the highway where one can visit a kiva and foundation ruins.  However, for those visitors who like to hike,   this entire area of Cedar Mesa has hundreds of sites to visit—just make certain that you have good maps (talk to the BLM) and appropriate clothing and plenty of water (cell phones probably will not have service to call for a rescue).

The Bears Ears seem always in view along the road and rocks range from the ever present Late Permian Cedar Mesa Sandstone overlain by the Organ Rock Formation followed by the Triassic Moenkopi Formation and the Chinle Formation.  The two buttes are capped by another massive and resistant sandstone, the Jurassic Wingate Sandstone.  The paleontological resources of the area have been briefly studied but appear to be richly endowed. So, I just look at the geological features and dream.
Utah 275 splits off from Utah 95 and takes a short four-mile ride into NBNM where Quaternary forces have eroded Permian bedrock and produced three of the largest natural bridges in the world.  Many visitors tend to confuse natural bridges with arches; however, natural bridges are produced by flowing water.  At NBNM this flowing water was/is in Armstrong and White Canyons and the underlying bedrock is the Lower Permian Cedar Mesa Sandstone ~(270 Ma).  During this period of time the western shoreline of North America trended approximately north-south and ran through central Utah.  The Cedar Mesa Sandstone in the Monument was deposited as large windblown sand dunes that migrated inland from the shoreline; therefore, visitors will observe large scale crossbedding in the rocks (Huntoon and others, 2000).

NMNM lies near the crest of the Monument Upwarp where rocks of late Paleozoic and Mesozoic (Cenozoic?) age covered the Cedar Mesa to a depth of at least 5000 feet (perhaps up to 10,000) but have since been eroded.  The Laramide Orogeny (Rocky Mountain building event) pushed/squeezed up the Monument Upward in the Late Cretaceous but the Cedar Mesa was not exposed until sometime in the last six million years (Huntoon and others, 2000).

It is interesting to note that the landscape at NBNM (including the bridges) is related to the Grand Canyon!  The removal of rocks overlying the Monument Upwarp “started” in the Eocene (~39-35 Ma) when the Colorado Plateau began to rise as sort of a cohesive unit.  As erosion was proceeding accompanying streams were flowing and meandering  over the area.  The base level stream of the area was the Colorado River and as streams reached the Cedar Mesa Sandstone, they continued their meandering ways. However, the major downcutting of the Colorado River, and the Grand Canyon, was in the last six million years, and was rapid.  So, the meandering streams in NBNM also cut rapidly into the Cedar Mesa bedrock and soon were entrenched---as readers have seen in Goosenecks of the San Juan (Huntoon and others, 2000). 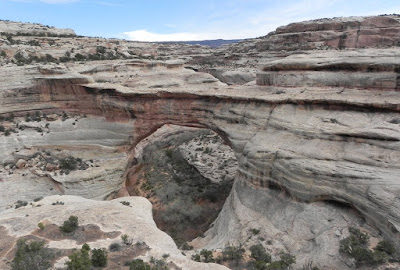 The current actual bridges, and those preceding but now collapsed, probably did not form until perhaps 30-12ka (and later) when more abundant water was available from runoff due to climate changes associated with glaciers to the north.  Natural forces, such as frost wedging and root growth following rock joints, created opportunities for cutoffs that created abandoned meanders and resulted in the formation of bridges (Huntoon and others, 2000).