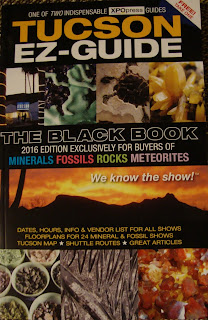 I have taken off from Blog Postings the last month or so to get ready for the BIG event.  The days finally arrived: the opening of the annual Tucson Gem, Mineral and Fossil Shows (TGMFS).  Something like 48 different venues are scattered around town with some running for a couple of days (Gem and Jam Fest) but most operate for a couple of weeks ending the 14th of February.  Some shows may only have 5-6 vendors; most are larger with  the “really big ones” producing vendors in the “several hundred” category.  A few venues are wholesale only but most are free and open to the public.  Some shows I visited are the “mom and pop” variety (my favorites) run out of sunshades or even open air while others are housed in gigantic permanent “tents” with concrete floors where showcases are common.  Prices range from less than $1 to hundreds of thousands.  In the 22nd Street Show I saw quartz cabs selling for a couple of bucks while in the next door booth an opal (larger than a nickel but smaller than a quarter) was priced at $185,000.  I poked and sorted and blew dust off boxes looking for elusive mineral specimens priced at $10, or preferably below!  I also was hot on collecting “cheap” (no better word for being frugal): 1) blue minerals, the theme of the main show; and 2) minerals with names I did not recognize—not too hard for an old paleo person!

Part of the large conglomeration of the TGMFS is The 62nd Annual Tucson Gem and Mineral Show (TGMS) commonly known as the main show ($13 admission fee; parking competitive---ride the shuttle)).  This four-day event was held at the Tucson Convention Center (February 11-14) with the 2016 theme Shades of Blue, Minerals of the World.  More on this later.

This posting, along with several following, will be my attempt at describing some of the venues along with my chase for the elusive cheap minerals.  Even with the many days spent in Tucson, it was impossible, at least for me, to hit all of the 40+ shows.

My first day in Tucson is usually spent checking out the Arizona Mineral and Fossil Show on north Oracle Street (one of the major N-S streets in Tucson leading downtown from the north).  Two of my favorite “mom and pop” dealers are there every year: Rock Deco and JaM’s Rocks.  In addition, there are a number of other dealers present who display some really large specimens---much too large for my collection but enjoyable to browse. 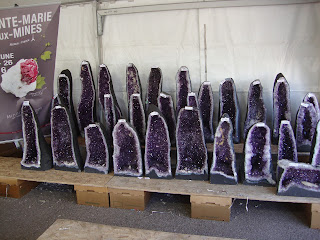 So my find for the day was a specimen of blue quartz collected from the Keystone Traprock Quarry in Cornog, Chester Co., Pennsylvania.  I was uncertain about the blue chromophores coloring the quartz since I remember from my eons-ago mineralogy course that blue was not a natural color found in quartz!  So now what?  Well, just in time for the Show was the publication of Rocks  and Minerals dedicated to “Shades of Blue.”  Skalwold and Bassett (2016), in a fascinating but complex article, noted that “blue quartz has not been found in nature so far, though some types of amethyst can be treated to turn blue…Natural quartz may appear blue due to inclusions of blue minerals”…Blue quartz from Minas Gerais, Brazil, is “colored by inclusions of elbaite, variety indicolite.”

MinDat.org noted that blue quartz "owes its colour to inclusions, commonly of fibrous magnesioriebeckite or crocidolite.  The color may be caused by the color of the included minerals or by Rayleigh scattering of light at microscopic inclusions."

According to MinDat the Keystone Traprock Quarry is "a crushed stone quarry in Precambrian (Grenville) amphibolite gneiss [a metamorphic rock found at convergent plate boundaries where regional metamorphism created great heat and pressure] within the Honeybrook uplift. The mineral assemblages for which this locality is well known, are the product of alpine cleft type hydrothermal recrystallization ['Alpine-type fissures are cavities that have opened during tectonically caused stretching and bending of the rock. The cavities are entirely enclosed by the surrounding host rock...Alpine-type fissures can only form under special conditions that are not easily met. They form when rocks get folded or sheared at great depths and at relatively high temperatures, between 200° and 600°C. Under these conditions the rocks are still solid, but malleable, so they do not shatter when they get deformed slowly' www.Quartzpage.de]. Operations [at Keystone] started in 1907, but the quarry is now (2014) water filled."
The specimens, like mine, seemed to have been collected in the 1970s or maybe the 1980s.  Most "modern" specimens have come from adjacent drainages and are abraded.  The problem is I cannot definitively identify the source of the blue coloring--what are the inclusions?  However, my best guess comes from information provided by Mark Jacobson (2016) who noted that Star Blue Quartz is the state gemstone of Alabama and comes from metamorphic rocks of the Inner Piedmont and Blue Ridge Provinces of the Appalachian Mountains.  These Provinces extend into Virginia where the blue color of the quartz is thought (Wise, 1981) related to Rayleigh wave scattering by abundant submicrometer-sized rutile or ilmenite inclusions. Evidently the blue quartz known as Llanite from Texas is also associated with ilmenite and/or rutile (Zolensky and others, 1988). My specimen is a nifty blue specimen and started off my hunt with a "bang"!